The name might seem strange, but yes, Witch Hazel is one of the most popular topical botanical in all parts of the world. It is a topical extract that became known to the world owing to its amazing benefits in skin toning, cleansing and healing. It is now well renowned as the most common base used in toners, makeup removers and cleansers. The indirect Witch Hazel uses are numerous and it is majorly used as a base for many cosmetic products out there.

Here’s what you need to know about this amazing shrub and its incredible benefits for your health. 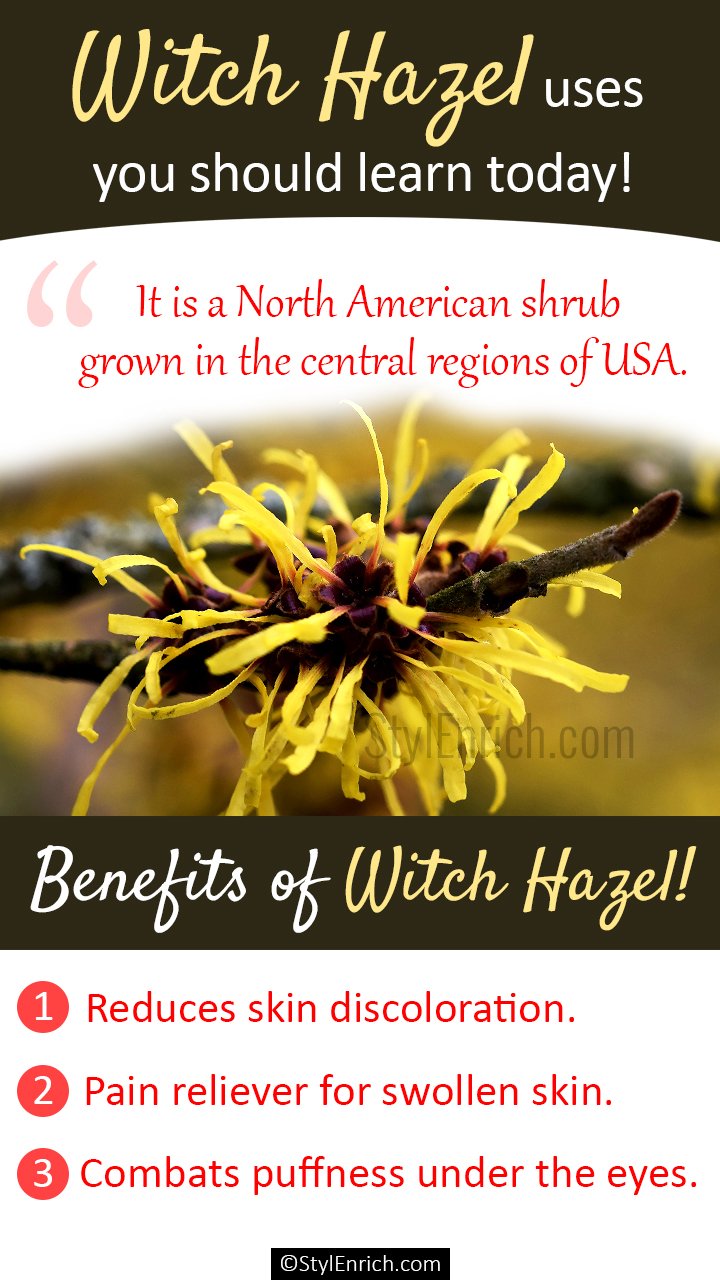 So, What Is Witch Hazel?

Witch Hazel is a North American shrub grown in the eastern, mid western and the central regions of United States of America. It is also grown in the Southern Canada regions. It looks bright as sun with its cheerful yellows and bright orange blossoms, resembling beautiful fireworks. Witch Hazel is not used in its raw form. It goes under a process of extraction and the end product is used majorly for medicinal purposes. Apart from its wide medicinal applications, it is also used for various other skin related problems. Read on to know the benefits of Witch Hazel.

Here Are Some Less Known Witch Hazel Uses You Should Know

Witch Hazel is a rich source of astringent compounds that helps in making the proteins of skin cells build in tightly together. This tightness of skin cells helps in combating skin discoloration problems. This problem is especially common in the underarms region, thighs, buttocks and neck. It can be used to get rid of this problem in a short span of time.

Swollen skin can be a real pain that carries along for long periods of time, with no signs of leaving unless actions taken. Swollen wounds can often lead to other problems starting from headaches to pain in the surrounding regions. Now, there are a lot of ways to help soothe the swollen skin but Witch Hazel is the best pain reliever. Since swollen skin takes fair amount of time to heal, this amazing shrub can relieve pain. Besides, the astringent compounds helps in building up the skin cells tightly and thus, also aids in quick recovery.

Puffiness or what is generally referred to as bags under the eyes is a real spoiler for a beautiful face and this shrub can be used to effectively combat it. Dabbing the region using a cotton ball dipped in the water-alcohol solution of Witch Hazel just before sleeping is a great way to fight “bags”. The results are not very immediate but it surely pays off in the long run. In fact, getting rid of puffiness near eye region takes long periods of time even when you’re using a more chemical based solution (usually used in cosmetics). So, give it good time before you can see visible results.

Sunburns is one of the most common issues and sunscreens might not be the most efficient way of fighting this. For many people, sunscreens only act as barriers to the harmful UV rays to an extent, but not fully. Using Witch Hazel water-alcohol solutions along with your sunscreens not only makes you less exposed to direct sun but prevents sunburns to a great extent. It is not a great idea to use this solution on your skin directly, as it might prove to be very harsh on your skin.

But, using it along with your sunscreen is a great idea! Another addition to this is that using Witch Hazel bring down the irritation caused by sunburns to as close as zero. Sunburns is common for Scalp Problems all types of skin. But, irritation towards sunburns is something only few types of skin suffer from and the experience can become quite exhausting. Witch Hazel is an effective and safe way of coping with the irritation caused. It soothes down the skin and also relieved the pain caused by harsh sunburns.

Harsh scalp conditions include red scalp and scalp burnouts caused by various reasons. These categories of scalps are referred as ‘harsh scalp conditions’ and they demand extreme care and precautions. It is almost impossible to treat these problems with regular shampoos and there are only a handful of cosmetics out there which are considered to be ‘safe’ for these scalps. Major component that makes these scalps very vulnerable is their nature of inflammation. Witch Hazel is rich in its anti-inflammatory properties and is used as a base for shampoos and conditioners that are designed for red scalp and scalp burnouts.

Bug bites can be painful and can last for days, weeks or even months sometimes if proper care is not taken towards it. It can further lead to swelling and itching. The swelling part appears to vanish soon, but itching can stay longer. Witch Hazel can be used to treat this condition and bring down both swelling and the itching. Herbalists suggest using Witch Hazel solution with a small portion of baking soda to create a paste like mixture and apply it as a healing cream on the affected areas. It reduces itching almost instantly and can bring great relief.

How You Can Use Witch Hazel?

Mix a solution of distilled water and Witch Hazel water-alcohol solution in equal proportions. Add a few drops of essential oils like clove, rosemary, lavender, eucalyptus or mint to this proportion to help soothe the pain and prevent inflammation. Store this mixture in a spray bottle. What this effectively acts as is an effective insect repellent and all you have to do before stepping out is spray a few drops onto your body.

Discoloration can happen in the forehead and cheek regions of the face, making your face appear dull and sulked down. Using Witch Hazel solution by dabbing it gently on your face using cotton balls can help fighting this discoloration. Additionally, it also helps in the promotion of a clearer skin by reducing the dark spots and red rashes on the face. Note that Witch Hazel should not be used directly on the face as it can have adverse effects.

9) Witch Hazel Can Help A Great Deal In Blood Clotting

When you have deep cut wounds, the general antiseptics and dressing will not be enough to stop the blood from pouring out. And if you have to wait for blood to clot naturally, it might take quite a long time. So, a quick fix to this would be using Witch Hazel. It is a quick, easy and an effective remedy to immediately stop bleeding, especially from deep cuts. Ensure that you’re not pouring down the liquid on affected area, but use a cotton ball to absorb just a drop or two and dab it gently over the affected areas.

Witch Hazel can help in reducing acne and also the dark scars left behind by acne. Its anti-inflammatory properties make it soothe down the acne, prevent it from developing, and melts it down eventually. Using it directly is not recommended as it might be over harsh on the skin. So, a good idea is to make it into a paste like cream by mixing a few drops of Witch Hazel solution to baking soda and dab the paste onto affected regions. Let it stay for sometime before you wash it off with chilled water. You may also use rosewater to wash the mixture off to soothe down acne to a great extent.

#1 – Where do I find Witch Hazel for using it as a cosmetic product?

You can find them in general medical stores. You might not find it in every corner medical shop, but you should be able to spot it in bigger stores. You can easily find it on online stores too.

#2 – Can I use Witch Hazel for adding shine to my face?

Yes, you can. Only note that Witch Hazel solution should not be applied directly. You can mix it with baking soda or a good essential oil like rosemary, clove, mind or lavender, and then use it on your face. A good idea is to mix a few drops of Witch Hazel solution to your daily face cream before using it.

#3 – Will I need a doctor recommended to use Witch Hazel in treating deep cut wounds?

If you’re using it for internal uses, then yes, it’s always recommended to consult a doctor. If you’re using it only to dab it onto your skin to stop bleeding, you can use it along with your regular antiseptic.

Read Next – The Daily Skincare Routine to Follow for Every Skin Type!