Every mother worries about her child’s eating habits as they love to eat more sweets,  candies and fast food than the home made food. These eating habits not only affected the appetite but also resulted in teeth problems. Every day we see a child complaining about a toothache. Sweets and Candies are not only the cause dental caries in children but other factors like genetic, food habits, systemic factors and gum diseases can also lead to the tooth decay or dental caries. 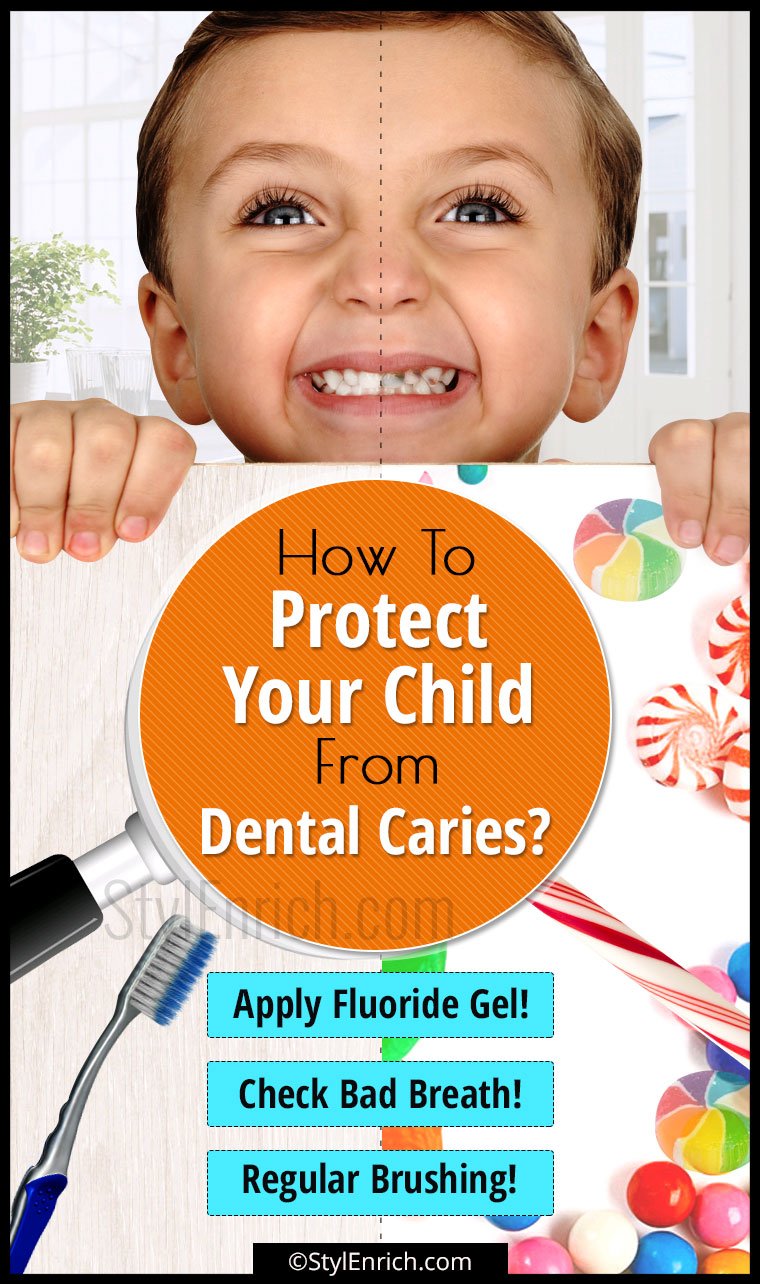 Here we bring you extremely useful tips on Dental Caries In Children.

This comes the first as many parents do not brush their kids teeth until the age of 2. The infant tooth start erupting soon after the 6 months and may delay in some infants. This is also called as Dentition period. During the period one should start brushing kid’s teeth softly and gently with soft finger brush soon after the 5 months. Many good brands of infant brushes are available in the markets. As the child grows it will get habituated to brushing regularly. The other most important point is to change your and your kid’s toothbrush every 3 months once. Do not wait until the toothbrush blossom like a flower. Regular brushing helps in teeth cleaning and protection from other gum diseases.

Yes, this is the most important aspect in brushing. The children learn brushing from their parents, so mother or father should follow a TSD technique. TSD means tell, show and do. The parents should explain, show and perform the brushing technique to their children. Brushing every 3 teeth at a time in a circular motion is the proper technique. Normal brushing time is approximately 2 minutes. The horizontal brushing which most people follow doesn’t help in plaque removal nor in cleaning the teeth properly. The small kids should be guided by the parents each time before brushing. Some kids fear to brush so parents can make a routine habit of brushing teeth along with their kids this gives them confidence and make brushing a fun learning activity. There are many branded electric toothbrushes available in the market which can help your child in proper brushing.

Most of people after waking up in the morning will rush to their bathroom for brushing teeth, this is a wrong technique. An ideal time for brushing is after each meal. The food gets stuck or gets coated only after you eat something and stays for a longer time in the teeth leading to the decayed tooth. So to avoid decayed tooth one should start brushing teeth soon after the meals in the morning and after dinner at night. As brushing after lunch is practically not possible to many school going kids, a daily habit of brushing two times a day is necessary to fight against teeth troubles. Children should be encouraged brushing soon after meals and explain them the bad effects of non brushing.

When our body gets diseased or infected then it shows externally by signs and symptoms. Similarly, when tooth start to decay or get infected, bad breath problem occur. Bad breath is also called as Halitosis. Children are easily prone to tooth decay due to their eating habits. This decaying can be stopped at the earlier stage by carefully observing the bad breath. Mother when comes to know regarding the bad breath then the child has to be taken immediately to a dentist for further treatment.

It is a gel containing fluoride used mostly for the prevention of caries by the dentists. Fluoride is a mineral which helps in the prevention of dental caries and also the acid attacks from plaque bacteria. It also helps in the remineralization of the teeth in early tooth decay. This application of fluoride gel is done by dentists at frequent intervals. When there is an early indication of bad breath or the cavity problem then immediate attention to be given and taken to dentists for the application of fluoride gels. This gel lasts for 3-4 months once applied to children teeth. The gel is used on disposable dental trays and pressed against the upper and lower jaw simultaneously for 1 minute. This procedure is nonpainful and less time consuming and helps in prevention of tooth decay in children.

Foods like sweets, candies, sugars result in the early tooth decay. The sugars present in the sweets are the main culprit which result in the tooth damage. In some children there is thick saliva which also adds to the coating of the sugars on the teeth resulting in the acid plaque bacteria. Increased water intake and brushing teeth soon after eating such foods can prevent the formation of bacteria and in resulting tooth decay. In some children there may be small space in between two teeth which results in the assimilation of food particles between the teeth, this, when remained for along time, can result in dental caries. The right brushing technique helps in the removal of food particles between the teeth and the if space is large then meeting a dentist can help in correction of the teeth problems.

In recent days, there are many toothpaste and mouthwash containing fluorides. The regular use of fluoride containing toothpastes and mouthwash helps the teeth against cavity formation. Apart from its beneficial property the fluoride when taken in excess results in a condition called Fluorosis where the teeth and bones become porous leading to fractures and early loosening of minerals. Hence it is important to note that a child below 6 years of age while brushing tooth should always be supervised by anyone of parents. Only a small pea-sized toothpaste should be given for children and advised them not to swallow it.

Our teeth is the hardest part in the body. It contains enamel and dentin which makes it stronger other bones. Calcium plays the vital role in the development of bones and teeth. Calcium not only helps in building the strong teeth but also fights back carries. An average of 800-1000mg of calcium intake per day is advisable for the stronger teeth in a child. The foods rich in calcium such as dairy products like milk, curds, cheese etc, spinach leaves, tomatoes, sardines are helpful for the kid’s healthy teeth.

As prevention is better than cure, a regular visit to dentist once in 6 months is necessary for the healthy teeth and healthy gums. Most of the teeth pain can be treated and corrected at the earlier stages which when postponed may lead to tooth extractions. Your family dentist not only saves your decaying tooth but also prevent further complications.

The dental pains are the most severe pains which can affect a small kid to an adult. Most of the tooth decay cases is due to the excess eating of sugars and improper brushing technique. It can be prevented from the dental caries by following the simple above guidelines. Do not delay in visiting your dentist once you find any black spots or chalky appearance in the tooth for the further protection of your kids oral cavity.