To understand menstruation & menstrual disorders you need to be familiar with the anatomy of the female reproductive system. The uterus is a small organ situated at the lower end of the female body between the bladder and large intestine. It mainly consists of 2 parts – the body and the cervix. Normally the body of the uterus is in collapsed condition where the walls of the uterus fold in and is of fist size. In case of pregnancy the walls expand to include the fetus. The cervix is the lower part of the uterus and opens up into the vagina. When the female is menstruating, blood oozes out into the vagina from the uterus. On either side of the main body are the fallopian tubes which have the ovaries. The ovaries produce the egg. When the egg is successfully fertilized it becomes an embryo and forms the fetus. The fetus is attached to the uterus lining and  is fed from the wall of the uterus which is thickened with blood vessels for nourishment of the fetus. The lining of the uterus is called endometrium.

If there is no successful fertilization of the egg the endometrium is discarded as menstrual blood through the vagina. A menstrual cycle is typically 28 days. It could vary between 21 to 35 days and is still considered to be normal. This depends upon the health and age of the individual. As the female ages there are lengthier menstrual cycles. Each menstrual period lasts for around 5 to 6 days. But in some healthy females it could last for 4 or slightly above 6 days. Menstruation begins in a female when she is typically 12 to 13 years of age. In some human races it could be earlier. 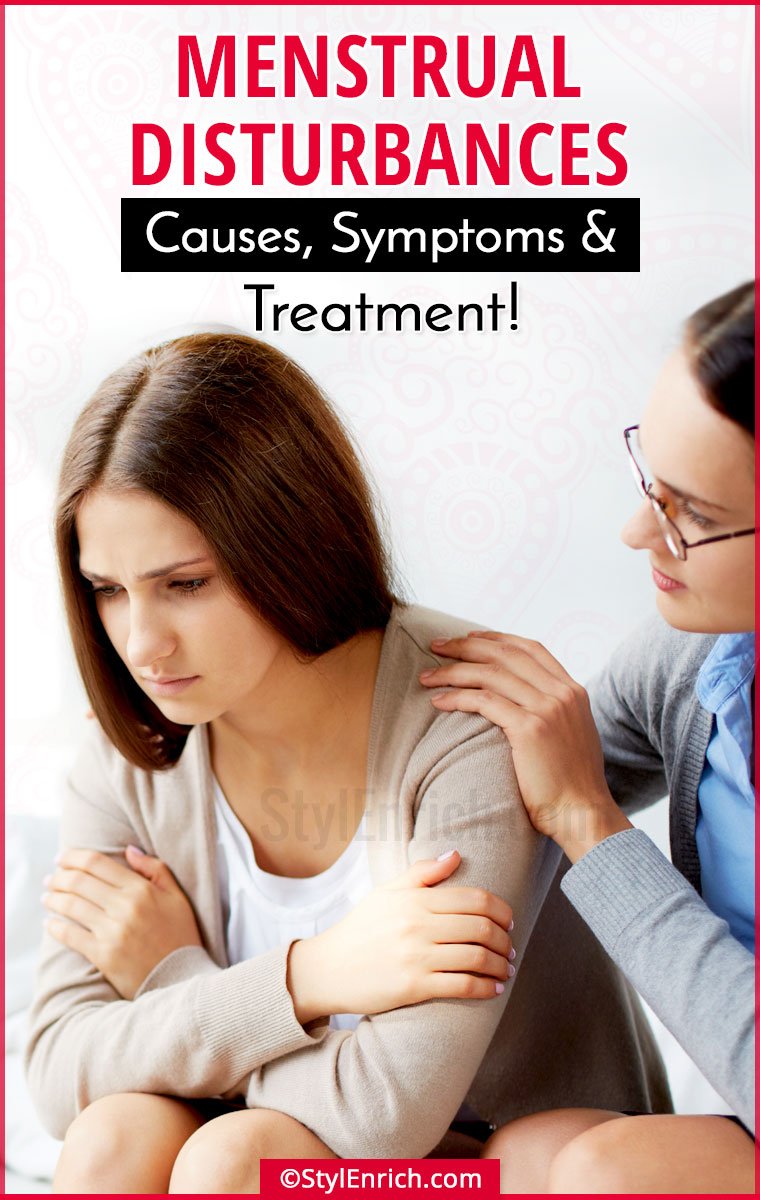 Menstruation Is Under The Control Of?

The whole process of menstruation is controlled by 6 hormones. These hormones are in turn controlled by the pituitary and hypothalamus gland in the brain. Gonadotropin-releasing hormone is generated by the hypothalamus. This in turn causes the pituitary gland to secrete follicle stimulating hormone (FSH) and luteinizing hormone(LH) At the order of FSH and LH the ovaries secrete estrogen, progesterone and the male hormones. These hormones play an important role during the menstruation cycle.

Unimaginable Secrets No One Ever Tells You About Menopause!

Menstrual disorders are seen if the cycle is less than 21 days or more than 3 months. Also if the period of menstruation is more than 10 days it becomes worrisome.

Some of the common menstrual disorders and their symptoms and line of treatments is given below.

During menstruation, women could experience lower abdomen pain and discomfort. The cramps could spread to the lower back and the thighs. The contraction in the uterus is the cause for the cramps. The pain typically starts when the women starts bleeding. It could last for 1 to 2 days. It is typically seen along with heavy bleeding.

Some women could experience heavy bleeding during menstruation days. Normally a woman loses 30 ml of blood during a menstruation cycle. The woman typically uses 3 to 6 pads per day. If she finds that the pad or tampons need to be changed every hour since it is heavily soaked it is a sign of excessive bleeding.

The cause for heavy bleeding could be-

If a female does not get her first period by the age of 16 it is declared to be primary amenorrhea. Secondary amenorrhea is when you miss your periods for nearly 6 months after getting it regularly. This could be because of malfunction of the pituitary gland or the female reproductive system.

The case of adult females the causes could be

As Part Of Treatment Methods, You Have –

These symptoms are generally seen a week before the actual periods. They are physical, emotional and behavioral traits and can be seen all through the reproductive years.

The symptoms of PMS include –

The major cause of PMS is attributed to hormonal imbalances. Estrogen levels are found to vary during a menstruation cycle which causes mood swings and other menstrual symptoms. These symptoms are found to disappear within 4 days of onset of periods.

Treatment Options For PMS Include –

5. Menstruation Disorders Due To Anatomical Problems

There could be cases of heaving bleeding due to issues related to the reproductive system. Some of the causes include

Treatment in the above cases includes visit to the gynecologist and taking their advice. In some cases if the fibroids cannot be removed surgically, the whole uterus or parts of the uterus are removed.

Let’s see some amazing facts about female body worth knowing!

The best person who can detect any menstrual disorders is the doctor. Thus if you are experiencing any abnormal symptoms with respect to menstruation you could consult your doctor. The doctor would quiz you with questions regarding you menstruation cycles, blood flow details etc. Thus you need to go prepared with all the notes.

The doctor could also do a physical check of the pelvic region. The doctor can feel the reproductive organs and find out if they are inflamed. If there are doubts the doctor could schedule a pap smear test too. This is to rule out any cancers. Blood tests can also be scheduled to find out about hormonal imbalances. In case of pregnancy the same can be confirmed by blood or urine test.

Eating a healthy diet 2 weeks before the periods time will go a long way in resolving symptoms like cramps during the periods. This includes whole grains, lots of vegetables and fruits. Junk foods and saturated fats should be avoided during this time.

For women who bleed extensively, consumption of the diet rich in iron is advisable. Food products rich in heme iron are ideal for maintaining good iron levels in the body and compensating for loss of blood during menstruation. Such foods include fish, meat, poultry, clams and oysters. Vegetables are the non heme iron products. Consuming of vitamin C helps in absorption of non heme iron in the body. If not through food, iron can also be taken as supplements. Consumption of herbs and supplements also changes the chemistry in the body and relieves uncomfortable symptoms in the body.

Light exercise is advisable for relieving pain during menstruation. Application of a heated pad on the abdomen or soaking in warm water helps relieve cramps. Maintain vagina hygiene and change pads or tampons regularly. Doing yoga and meditation on a regular basis helps to keep your mind calm and relaxed.

Consumption of non-steroidal anti-inflammatory drugs is found to alleviate some of the menstrual disorder symptoms.

Some of the symptoms like PMS are bearable during the menstruation period. But there could be severe ones which would need the attention of a doctor. Thus you can decide based on the intensity of symptoms on whether to need to consult a certified doctor or not.­­