Female body is simply one of the mysterious creations on the earth. Every day you discover something new and still are away from knowing everything about it! How amazing it is to know about some shocking and surprising facts about our body about which we didn’t have any clue! We all know some basic differences between the men’s and women’s body but there are bulk of such interesting facts about female body which rarely people know. From enhanced senses to better resistance from disease, there are some amazing facts about female body worth knowing! Get proud and know about the magical and cool abilities here! 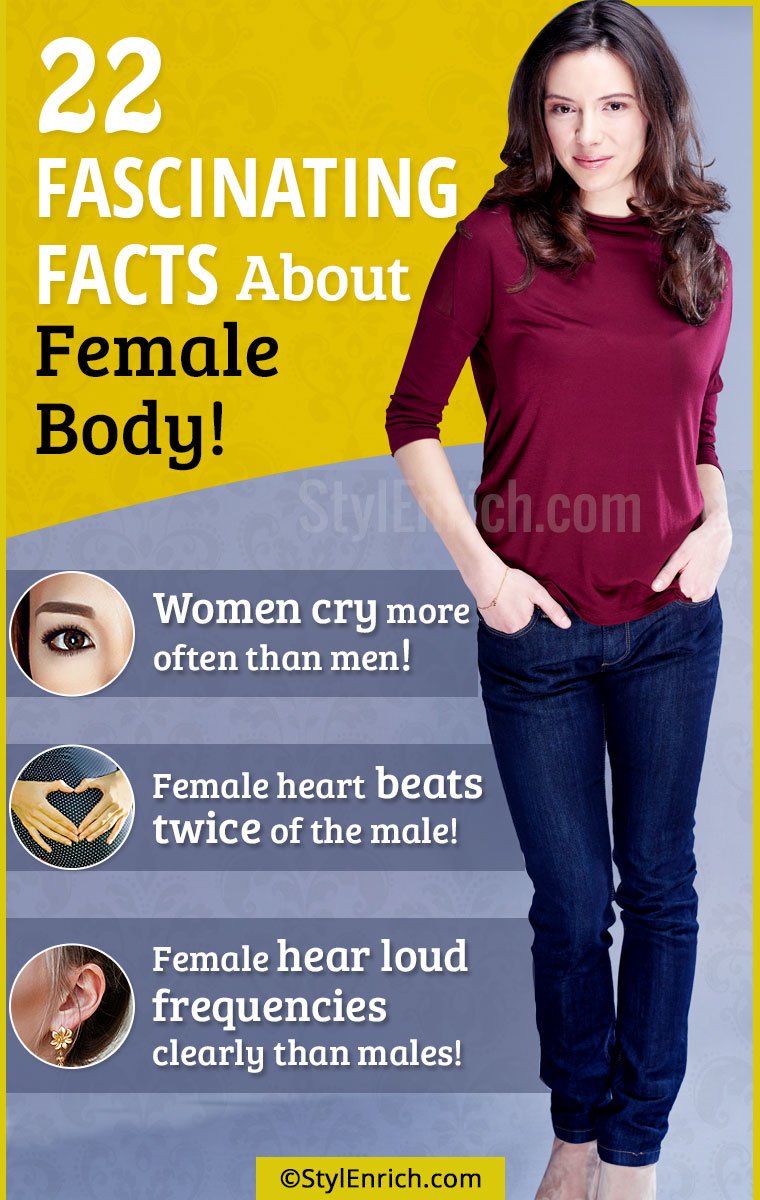 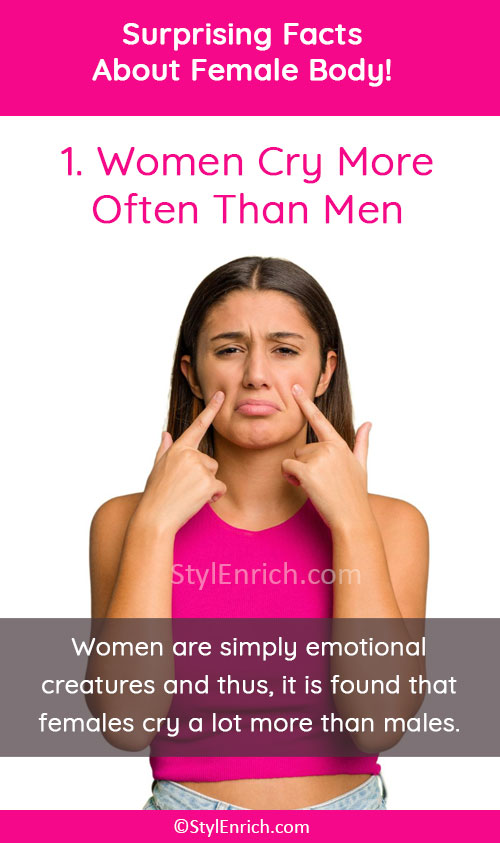 Women are simply emotional creatures and thus, it is found that females cry a lot more than males. The reason behind this fact is the female hormone! The female reproductive hormones make women more emotional and cry very often. On an average, women cry 30-60 times per year, while men cry around 6-17 times approximately!

Female body can burn lesser calories than men. Male bodies have a higher ratio of calorie burn than women! Also, men do have lean muscles which help in burning fat and all that flab in the body. During all the activities and also while sleeping, men burn more calories than women. This is, however, the calculation for short term.

It is discovered that the female body is amazingly flexible than the male body! If you think your daily yoga practices and stretches make you flexible, you would love to know that females are born with elastin in their muscles which provide flexibility and a perfect stretch. The reason behind this is to make the regular chores and living easy for women during pregnancy! To carry baby weight and to stay normally is a tough task and thus, flexibility would support women!

Women are less likely to have issues in the senses. Women have less hearing issues, less vision issues and such problems than men. Women also have a great acceptance and realization towards senses and can prevent various such illnesses related to different senses.

7. Females Can Differentiate and Enjoy The Taste Of Food More Than Male!

Aren’t you surprised how women can get along with so many tasks at a time? The answer to this dilemma is, corpus callosum located in the brain which is larger in female brain than men. Women can also switch tasks rapidly than men. This makes females superwomen and can promote multitasking more efficiently!

Let’s see unimaginable secrets no one ever tells you about menopause!

The female body is able to hear all those loud speakers and music beats quite easily! It is found that women can hear all the high frequency sounds more clearly and amazingly than the males! Women are blessed with sharp senses and thus it benefits in hearing the loud voices clearly.

10. Female Body Can Respond Better To All The Senses Than Male

Female body is amazing with all the senses. Everything from smell, taste, hearing and touch can be better experienced by females than males! Females are considered as a sensitive gender due to its ability to sense everything quickly and more accurately.  Women thus, effectively respond better than men in touch, sight, taste, hearing and smell!

Women can predict dangers and have nightmare more than men. Women are prone to have more bad dreams, feel more anxiety and are aware of the surrounding threats. This is due to the high levels of various hormones!

12. Females Get Cravings For Inedible Things During Pregnancy

During pregnancy ever had a feeling to eat some weird non-eatable things you watch around? Natural, as the females during pregnancy feel the craving for those inedible items!

13. Females are Emotionally More Attached To People Than Males

Women are filled with oxytocin which is a love hormone. Females have this hormone in a huge amount and thus females are attached and have a great bond with lots of people than males. Also, they tend to be more emotionally expressive than males. Men generally hide the emotions while women showcase them with different actions!

14. All The Females Have Unequal Sized Breasts

If you watch your breasts and feel they are perfectly equal sized, you would get shocked to know that no females ever can have two equal sized breasts. One breast of a woman is always little or bigger than the second one!

Some women have two uterus! Generally, we have an idea of one uterus which grows during pregnancy but some women are blessed with two uterus and that’s quite shocking! This is generally, a kind of abnormality which several women can face. With this abnormality though, women can get pregnant and deliver the baby normally!

Don’t miss these helpful guide on missed or irregular periods!

Women have more brain power and awesome memory than men! Women tend to remember and recall all the words used frequently and also can remember names, human faces, colors and such elements very easily!

On an average, women live more than males.  The female body shows healthier behavior throughout their lives and is more active than males. With all the immunity, emotional behavior, healthy habits, and activeness, females do live longer than males. Thus, all of this makes them free from different diseases and live longer!

We finally got an answer to the troubling question we all had “why women speak too much?” . Simply because they have two word centers help them speak like 8000 words a day! In general, women speak around 13000 words more than men. The proteins and elements in female body make women talk more frequent!

You would simply get surprised to know absolutely the superelasticity of your uterus. Generally, uterus is tough of as a 3 inches long organ but during pregnancy, the uterus gets extremely stretchy and grows long till the navel.

Males have a single X chromosome but females luckily are studded with 2 X chromosome factors which are very advantageous for them. The X chromosomes are loaded with the well-known microRNA’s which are immensely important for a strong immunity. These elements reduce the risk of life-threatening disease like cancer and protect women from such disease. Thus, females are protected against such disease and enjoy stronger immunity!

22. Females Have Colder Bodies Than Males

Female bodies are immensely cold than that of males. Due to hormones and especially due to the formation of the body, women have more tendencies to distribute fat and have the fatter layer under the skin. There are various processes like metabolism which create heat in the body. In females the metabolic ratios are low and thus, this keeps the female body colder. Also, cold temperatures and different hormones can affect the body temperature of women!