10 Unimaginable Secrets No One Ever Tells You About Menopause! 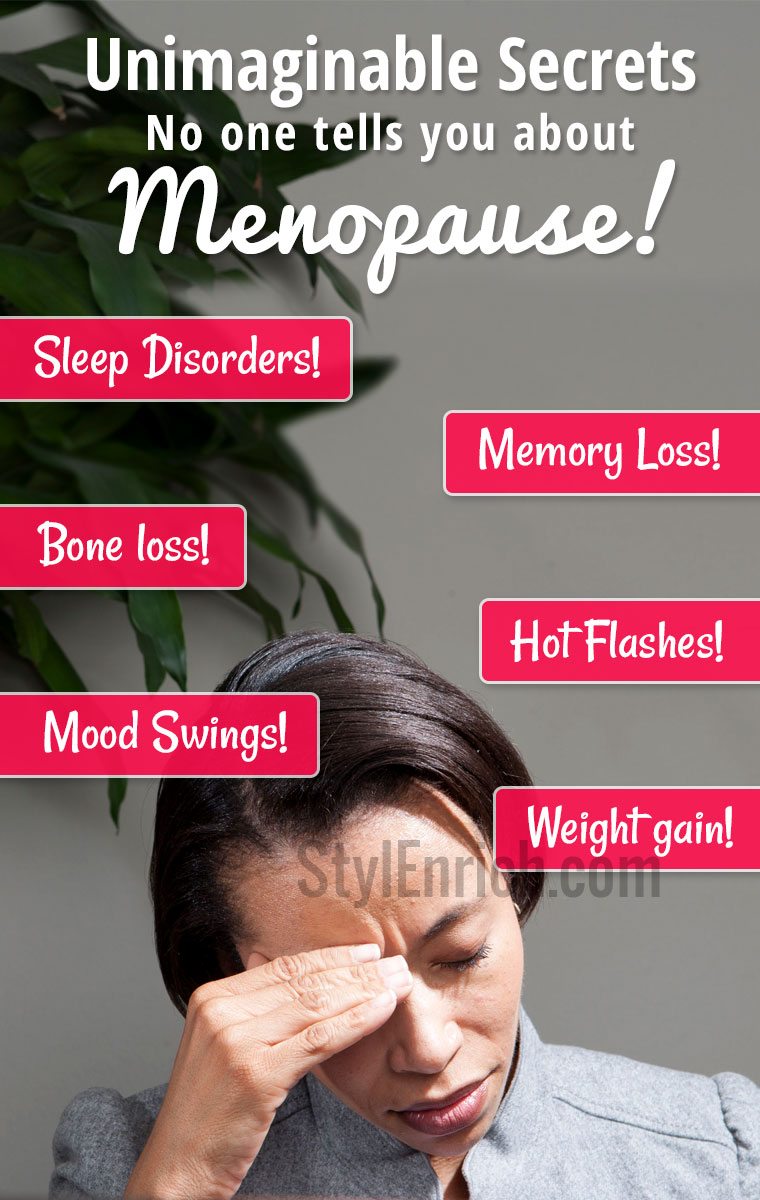 Secrets No One Ever Tells You About Effects of Menopause

Though menopause is characterized by the absence of menstrual periods, weight gain, and hormonal changes there are several changes that a woman will undergo in her body that no one dares to mention. Following are some secrets that no one ever tells you about the effects of menopause.

The first thing that gets affected when you attain menopause is sleep. Due to hormonal changes, there is a drastic reduction in the estrogen and progesterone levels that result in disturbed sleep. Researchers state that there are 3 ways in which menopause affects sleep. First is the development of mood disorders that leads to insomnia, second is the prevalence of sleep-disordered breathing, and third is the development of fibromyalgia.

Forgetting where valuables are kept or misplacing them can be one of the first signs of memory loss which is the main symptom of the onset of menopause. Short term memory loss is inevitable when menopause strikes. Memory loss and poor concentration are mainly due to the hormonal changes that occur during menopause.

Adding on extra pounds is normal after menopause. But most women are not aware of the fact that weight gain occurs gradually over the period of years without noticing. This gradual weight gain is more dangerous and poses several health issues like obesity, cholesterol, heart diseases and diabetes.

The hormone estrogen helps maintain the bone strength. Bone related disorders are more common in women rather than in men. The main reason behind this is menopause. We have noticed that women above the age of 50 are most commonly affected with arthritis and osteoporosis. Due to menopause, the ovaries stop producing the hormone estrogen and due to this there is a gradual loss of bone mass in the body. This leads to rapid loss of bone density causing arthritis and osteoporosis.

The sudden rise and drop in body temperature are referred to as “Hot Flashes”. Hot flashes are one of the most common symptoms of menopause. Hot flashes can lead to dizziness, anxiety, palpitations and sleep disorders. Episodes of hot flashes can be lengthy and come in stages before the onset, and during menopause.

Although this might seem surprising, feeling less social is one of the major symptoms that will attack in menopause. If women are extroverts, they may suddenly feel less social and may want to spend time alone. Menopause is an “introspective” period, which means women would like to spend time alone time with self and undergo emotional changes. This could, in turn, lead to being anti-social.

As if the weight gain, bone loss, and hot flashes weren’t enough, hair fall is yet another plaguing symptom of menopause. Due to changes in the body and hormone fluctuations, the hair becomes dry and brittle. This leads to hair fall and in some women even baldness. Bad hair days are extremely common in menopause. Thinning hair can last for several months in menopause.

As the estrogen level in your body reduces, the oil production in your skin also drops. Due to this, the skin becomes extremely dry and flaky. More intense moisturizers are required for the skin to prevent it from getting dry in menopause. Although no one will warn you about dry skin, be ready to welcome it with the onset of menopause.

Along with the fluctuating hormones also accompanies frequent mood swings which can in turn lead to depression. Researches state that women undergo episodes of depression in the early postmenopausal or perimenopausal stage. Mood swings and depression in menopause brings on additional feeling such as anxiety, irritation, and sadness.

Although menopause is a different experience for each woman, it helps to be aware of the warning signs that will attack on the onset and during menopause. Being aware of the changes that will come will help you be prepared and cope with the effects of menopause that are bound to happen.

Exercise, a well-balanced diet, adequate rest, good sleep and improvement in lifestyle can go a long way in improving or preventing these effects of menopause from occurring. Make a conscious effort to eat well and maintain good physical activity. A good mental state of mind will also help to deal with menopause and effects of menopause.

You have spent a good 25 years working at home and outside, taking care of family and children. Now it is time to take care of yourself. Menopause is a stage where every woman should take care of her healthy physically and mentally. Since there is no way around it, one cannot escape this stage. Say goodbye to the uncertainties and worries about menopause and welcome this stage gracefully.

How to Take Care of Skin in Winter?

Amazing Health Benefits of Asparagus That You Didn’t Know Before!

Sweaty Palms and Feet or Hyperhidrosis – Amazing Natural Remedies To Cure Them!

Top 10 Best Sources of Antioxidants You Need to Check Out!