Turmeric is an ingredient which has been regularly used in India as well as a number of other Asian countries in the form of a spice, for medical purposes as well as a food. The roots of turmeric are taken and then powdered to be used. However, a number of other forms of turmeric are also available such as tincture, capsules, fluid extracts as well as tea. There are a number of turmeric tea benefits. If taken regularly, this form of tea can help in reducing low level as well as chronic inflammation which are caused by uric acid, oxidised lipoproteins, glycation, enhanced blood sugar level as well as general metabolism which is a continuous process of the body.

Chronic inflammation poses a lot of risks to all kinds of diseases, health issues and the pain which accompanies them. The curcuminoids in 1 single cup of this tea taken regularly would help in modulating several pathways which contribute to the inflammatory processes. 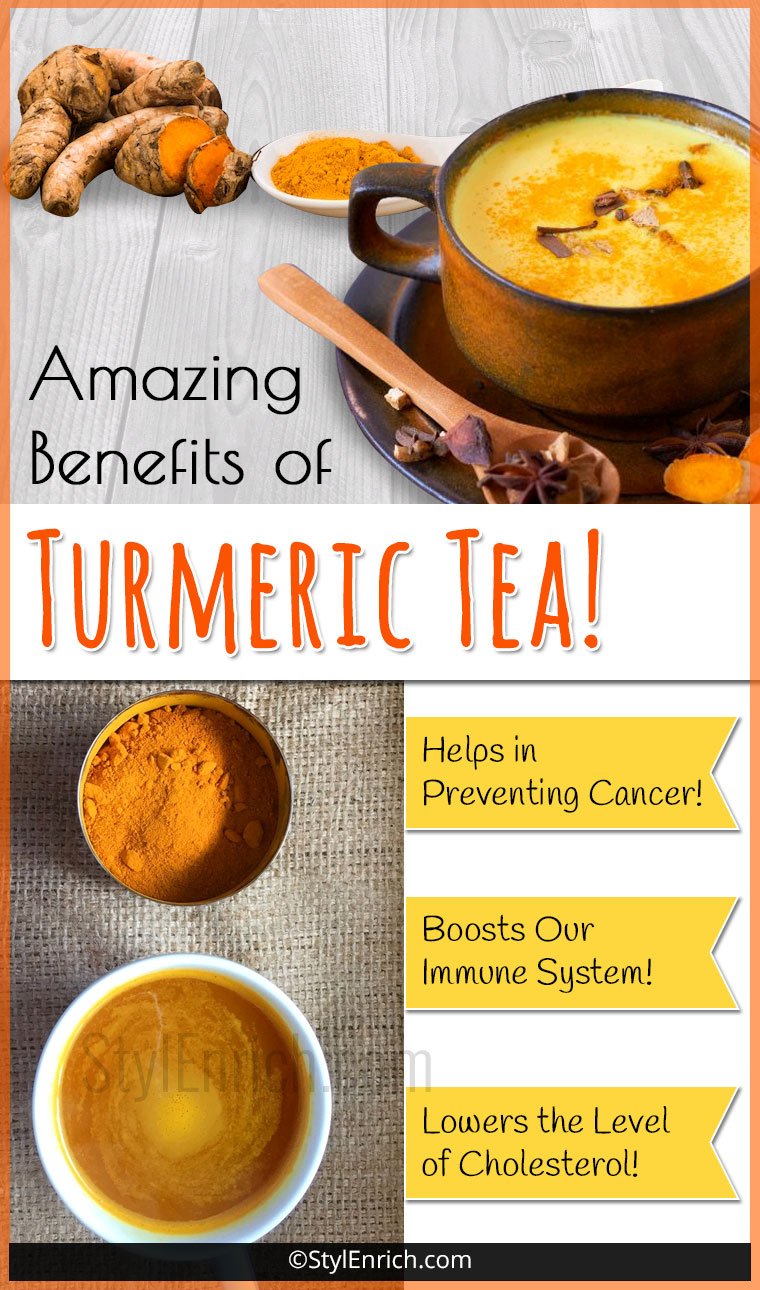 Apart from having antioxidant and health edifying qualities, there are several other benefits of turmeric tea. It boosts weight loss potentially.

According to several researches, turmeric has more than 600 health benefits. Turmeric has a number of anti-inflammatory properties which help in the treatment of different health issues such as rheumatoid arthritis, osteoarthritis, ulcerative colitis, etc.  It even helps people suffering from cancer, Alzheimer’s, multiple sclerosis disease, high cholesterol, etc. It may offer a number of benefits to people who are suffering from lichen planus which is a chronic disease which mainly affects the mucous membrane of the mouth, skin and tongue and it is also beneficial for people suffering from chronic anterior-uveitis which is inflammation of middle eye.

The anti-oxidant properties of turmeric tea help in preventing cataract as well as cancer. It can drastically reduce the risk of contracting atherosclerosis. It basically prevents the blood clots. The diabetic patients and people who are suffering from viral infections may also benefit a lot from turmeric.  You don’t need to take drugs when you can easily use turmeric in different forms without having any kind of side effects.

Turmeric even helps in preventing blood clots. It drastically reduces inflammation caused by acne, wounds and all the other skin conditions. Thus, just a pinch of turmeric added to different foods may offer all these benefits regularly.

As there are a number of health benefits of turmeric tea, you should include it in your daily diet.

1. Eases All The Symptoms of Arthritis

The very strong anti-inflammatory properties of turmeric tea may help in easing inflammation as well as swelling in case of arthritis. It reduces all the painful symptoms. A research has proved that an active compound contained in turmeric, known as curcumin is quite effective in eliminating pain in people suffering from osteoarthritis.

While researches are still being conducted regarding the cause of Alzheimer’s, it looks like the curcumin compound found in turmeric can help in preventing it. The antioxidants in turmeric may help in preventing damage which may lead to the disease. More importantly, some of the researches have shown that turmeric may even help in reducing the synaptic marker-loss as well as accumulations associated with the development of Alzheimer’s disease.

There are a number of medicinal properties in turmeric tea including anti-inflammatory and antioxidant properties. These properties contribute towards prevention of cancer. The “National Cancer Institute” has considered curcumin to be an efficient anti-carcinogen or a substance which helps in preventing cancer.

UC or Ulcerative colitis  is basically a chronic condition which causes ulcer in lower part of the gastrointestinal tract. Turmeric helps in maintaining the remission from the symptoms. As per the researchers of the University of Maryland Medical Centre, it has been found that the patients suffering from this disease had prominently low relapse rates when they consumed turmeric.

Several medicinal properties of turmeric can also boost your immunity even in people who are suffering from immune disorders. A study even theorised that it can easily moderate our immune system.

6. Lowers The Level of Cholesterol

Lowering LDL cholesterol can be quite helpful in reducing the risk of suffering from any serious condition like a heart stroke or a heart disease. There are several evidences that turmeric is very effective for this.

7. Can Help in Treating Uveitis

Uveitis is basically inflammation of iris. Some early researches indicate that curcumin which is found in this herb can actually be very effective for treating corticosteroids and that too without any side effects.

You must be wondering how turmeric tea benefits boosts weight loss. It is very simple. The excess weight develops a low grade or chronic inflammation. This is just like a continuous fire in cells. Due to its very strong anti-inflammatory properties, turmeric tea can help in diminishing the excess weight related inflammation and enhance the process of fat burning by restricting the inflammation messages that the cells receive.
By simple altering the way the muscle, fat, pancreatic and all the other cells receive the messages, curcumin can be quite helpful in curbing resistance form insulin, high BP and various metabolic conditions which are caused due to obesity. When our body does not fight inflammation it functions well and we start losing weight.

Just take 4 cups water and boil it. Add one teaspoon turmeric. Lower the flame and let the water simmer for 10 minutes. Strain the water with the help of a sieve. Add lemon for taste. If you want you can also add one teaspoon ginger to this.

So these are some of the Turmeric Tea Benefits which may be realised if it is consumed regularly. It is simple to make but has a large number of remedial and medicinal properties which help us improve our life.

3 thoughts on “Turmeric Tea Benefits That Do Wonders for Your Health and Beauty!”