7 Whiskey Benefits Will Blow Your Minds!

Everyone has a favorite drink. It could just be a cup of coffee or a cup of tea! Or it could be a shot of beer, whiskey, rum and so on. ‘Whiskey is a drink of an old man’. Have heard this statement? If not, good for you. If yes, then let me tell you it’s a myth! Let’s get here details and know the benefits of whiskey.

Whiskey is referred to as an old man’s drink because it has a got a strong taste. Nothing more than that. So, next time someone tries to make you feel guilty about drinking whisky telling that it’s an old man’s drink, you know what to do! Right? Whiskey has got wide range of preferences like the Fireball, Wild Turkey, Jim Beam and Jack Daniels. Regardless of the brand, all these taste almost the same. 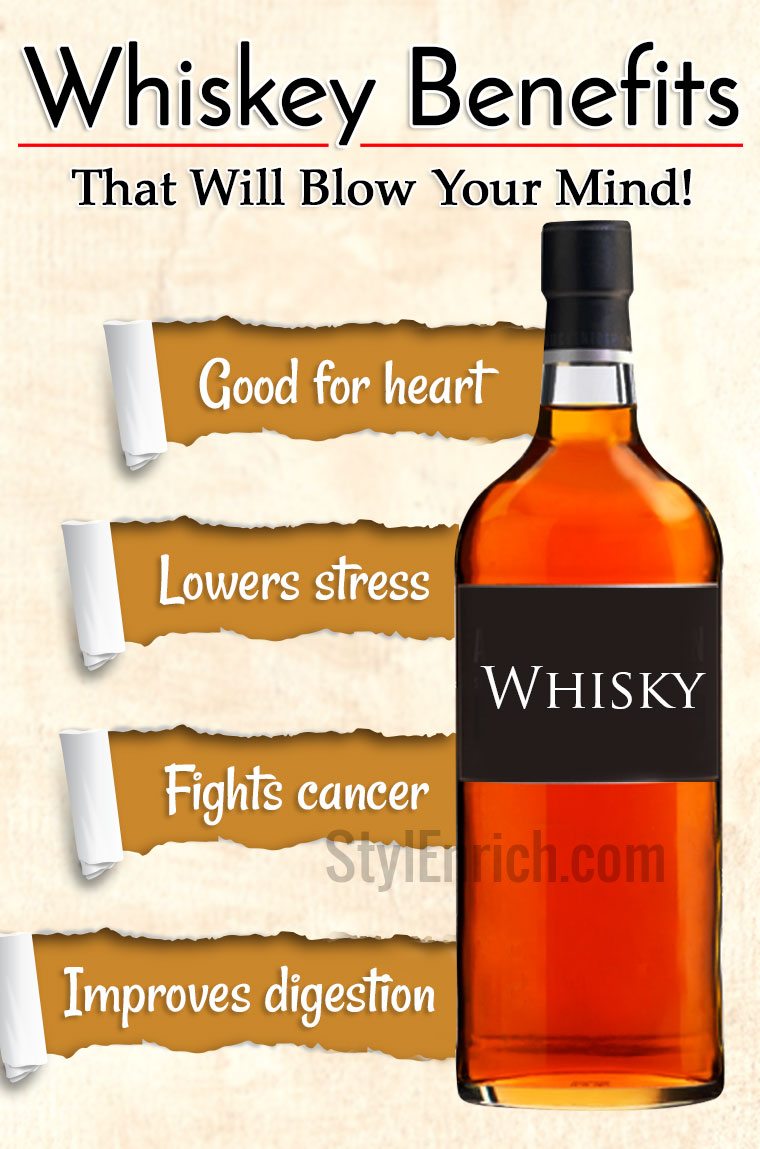 We cannot deny that there are some people who hate whiskey so much that they get down to criticize it. They might even label you a big time alcoholic because you drink whiskey. And you don’t know what to tell them all because you probably don’t know the benefits of whiskey. Let us admit! Most of us drink it for the taste of it or just the fun of it. But, would you be surprised if I tell that drinking whiskey has got many benefits! Well, most of you would be! Dig into the benefits of whiskey which will surely blow your minds! Let’s get started! Be prepared to be surprised!

Now, don’t take this article as a permission to drink a full bottle or half a bottle every night after work! But, two to three shots will not do any bad for your health. In fact, it is downright good for you! No more ado!

1. Cheers to All Diabetics

Most of the Diabetics patients keep cribbing about how they cannot drink alcohol and savor the taste. For those, whiskey is totally a safe bet. Yes! Heard me right! Whiskey has very low sugar levels which makes it a perfect drink that you can consume without having to bother about checking your sugar levels every now and then. It also lowers the extra sugar levels in your body. Excessive whiskey consumption is however not recommended. But, a shot or a two shouldn’t be an issue to you! There are hardly any times that the diabetic patients get to do this, so what are you waiting for? Go grab your favourite brand.

Although it is not false that excessive consumption of alcohol can lead to greater risks of Cancer, studies have revealed that moderate intake of whiskey can reduce the chances of Cancer. Whiskey which is very rich in antioxidants like the ellagic acid that can help you in fighting cancer by avoiding your cells from getting in contact with the carcinogens or other kinds of toxins which lead to cell mutation. The effects of chemotherapy too can be reduced by moderate consumption of whiskey.

Is very hard to believe, right? But yes, I am not kidding. It is a proven fact that whiskey has properties that can lengthen the life. It is absolutely loaded with tons of healthy antioxidants. These antioxidants will increase the power of your immune system. And what happens when your immune system is too strong? Are you less prone to getting attacked by the diseases right? It will keep you at bay from contracting various kinds if diseases and viruses.

Drinking considerable amount of whiskey can also help you to stop the free radicals which will damage your body. These damages cannot be seen or recognized at an early stage but they will slowly damage your body at a cellular level. What follows next is that you will not experience premature aging and other chronic diseases. So, think twice before you vomit whiskey!

When whiskey is taken in moderate amounts, it can improve your digestive process. The digestive enzymes that are released by our stomachs during digestion are regulated well by whiskey such that it is not in excess nor it is in very lesser quantities. Whiskey aids in requisite release of digestive enzymes which will improve digestion. It also prevents stomach aches and keeps you at bay from indigestion. However, you should note that consuming whiskey in large quantities can cause you irreparable damage to your stomach and the whole of digestive system. Only a shot or a two should be taken. Careful about that!

5. Aids in Healthy Functioning of Brain

A 2003 study conducted in the United Kingdom revealed that by drinking moderate quantities of whiskey, you can reduce the chances if developing Alzheimer’s and also other kinds of dementia. Thus drinking whiskey can actually help in the healthy functioning of your brain. So, stop giving ears to things like “If you drink too much whiskey, you will turn into a whiskey logged person”. Now you know how to shut them up!

6. Good For Your Heart

The high levels of antioxidants that are found in abundance in whiskey can reduce the chances of having a heart attack. Initially, you might shake your heads to this but let me reassure you this one’s a proven scientific fact. Dark beer and red wine too are believed to reduce the risks of stroke and heart attack. Drinking considerable amounts of whiskey will definitely reduce the chances of developing various kinds of heart-related problems and not just stroke. Try it out now!

This one’s something that probably most of you all have experienced yourself. Isn’t this also one of the major reasons why people drink whiskey? Stress is something that attacks your brain cells and slowly ruin your entire body healthy bit by bit. If left unattended, stress can lead to a lot of serious problems damaging your body. Whiskey is believed to calm the nerves of your brain and relieve you from stress. Various nervous system related problems can easily be avoided if you drink whiskey in limited quantities. This explains why many people turn towards whiskey when they feel blue or have had a bad day.

They were some of the benefits of whiskey that you probably weren’t aware of! Knowing the benefits of whiskey  can not just make us feel guilt free when we’re drinking but can also be used as a strong defense when someone’s trying to stop us from drinking whiskey. However, it should be noted that whiskey is basically an alcoholic drink and it should only be consumed in limited quantities.

Going overboard on drinking whiskey can put you to a lot of troubles. Know how much you’re drinking and just make sure you are only drinking it in considerable quantities to grab all of these benefits. Now, you might be feeling that “Had I known all of these earlier, I would have peacefully enjoyed my drink instead of cribbing about how people are criticizing you”, right? Well, better late than never! You know the benefits now! Go on to grab your favourite brand and drink it without having to be guilty about it. Having said that, Cheers!

Deodorant Mistakes You Are Making!

Being a post graduate in Home Science with Food and Nutrition as a major from Mumbai University, I am a promoter of DIY Home Remedies that are easily available in our house. I spend lot of time learning the use of organic herbs and their benefits. I come from Chennai and currently living in Mumbai.