Since several years green tea has become immensely popular among all age groups. Today, people opt for green tea rather than the conventional black tea, as green tea has numerous health benefits. Green tea is known to contain anti-oxidants that help boost immunity and protect the body from all infections. Have you heard of Benefits of Matcha Green Tea? 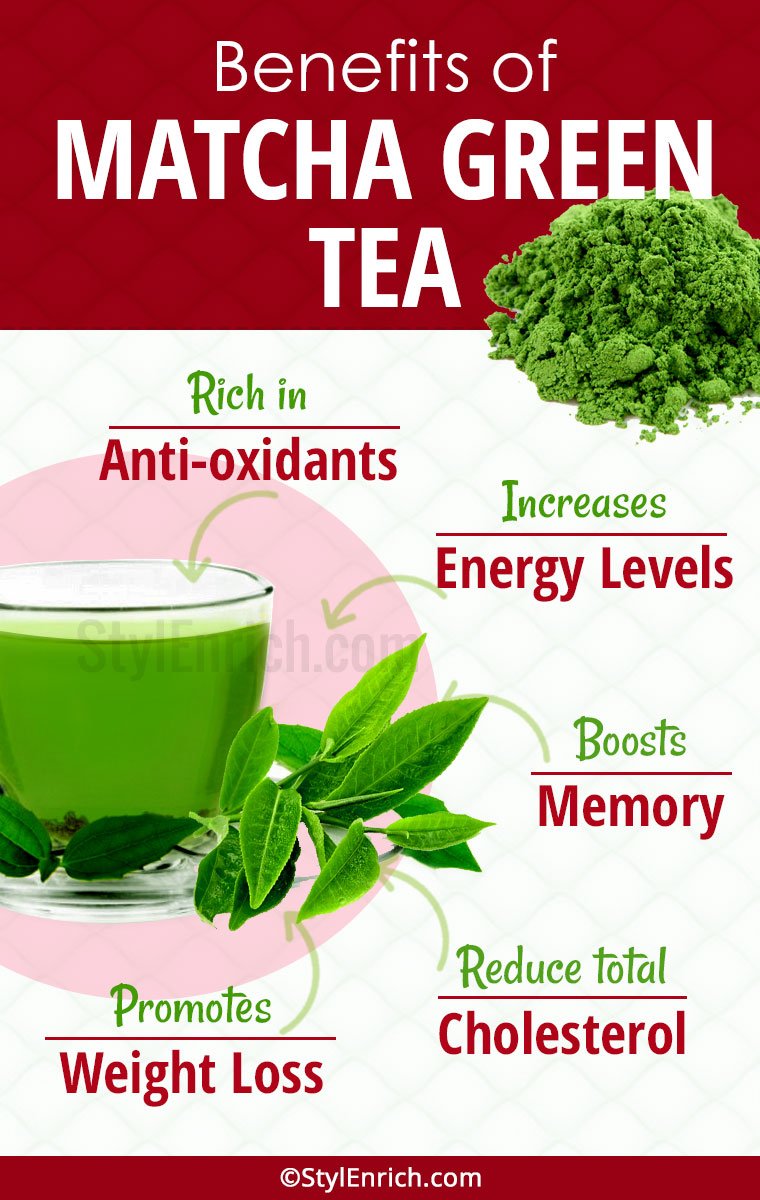 Before understanding the benefits of matcha green tea, it is important to know what is matcha tea and from where is its origin. Matcha, also known as the health elixir by Buddhist monks is bright emerald finely ground green tea powder. Matcha tea has been part of a Japanese tea ceremony for over 900 years and is immensely believed for its health benefits. Matcha originated in China in the 9th century and was commonly used as a drug to cure various ailments and infections. However, matcha slowly disappeared in China until the Buddhist monks from japan realized its true potential in the 12th century.

Matcha is prepared from a high quality leaf called as “trench”. These leaves are a darker shade of green as they are sheltered away from direct sunlight which reduce photosynthesis and slows down the growth. The darker shade of green color in leaves stimulate the production of amino acids and chlorophyll. The harvesting of matcha tea is done by selecting the smallest and youngest leaves to obtain the finest quality of matcha green tea.

One of the most popularly known matcha tea benefits is that regular consumption is believed to prevent cancer. The group of catechins (EGCG, ECG, EGC, and EC) is known to potentially reduce the risk of developing cancer. Some of the cancers known to be prevented are prostate cancer, bladder cancer, Colon and rectal cancer, and breast cancer.

Did you ever know that matcha tea benefits your gastrointestinal system as well? A recent study conducted on benefits of matcha green tea indicates that consumption of matcha tea stimulates the fecal extraction and gets rid of harmful toxins and chemicals from the body. Matcha tea is also known to treat gastrointestinal disorders.

Matcha green tea benefits for a healthy heart too. An importance action caused by the exertion of anti-oxidant epigallocatechin gallate helps in the maintenance of cardiovascular health. This component in matcha tea also potentially keeps the cholesterol levels low. Epigallocatechin gallate promotes autophagy in endothelial cells and reduces the accumulation of lipids in the body.

10 super foods for healthy heart that you must know…

Stress is the most burning down factor among the younger generation. Hence it is important to beat stress, boost memory, concentration and mental alertness to stay fit mentally. Benefits of matcha tea play a role in reducing stress and inducing a calming effect on the body. Matcha green tea leaves contain a unique amino acid called “L-theanine” that possesses anti-anxiolytic properties. This assists in sending alpha waves to the brain. The alpha waves in turn induce mental clarity, alertness, memory and a calm feeling of relaxation. Consuming matcha tea regularly causes a calming effect on the mind without inducing drowsiness.

How to Make Matcha Tea?

Now that you know the numerous benefits of matcha green tea, the essential question arises on how to make matcha tea? Matcha tea is readily available at health stores, groceries stores and shops online. When you are looking for matcha tea, opt for organic and non-GMO if available. Following is a simple recipe to make matcha tea.

You can use plain milk or coconut milk as a substitute to water. For sweetening you can add raw honey.

Green tea in general has many health benefits, but when you consume matcha green tea you are consuming its benefits in the most concentrated form. Due to this the health benefits are amplified. This miraculous elixir of health has been consumed for centuries in the Far East and is now considered very popular all over the world.