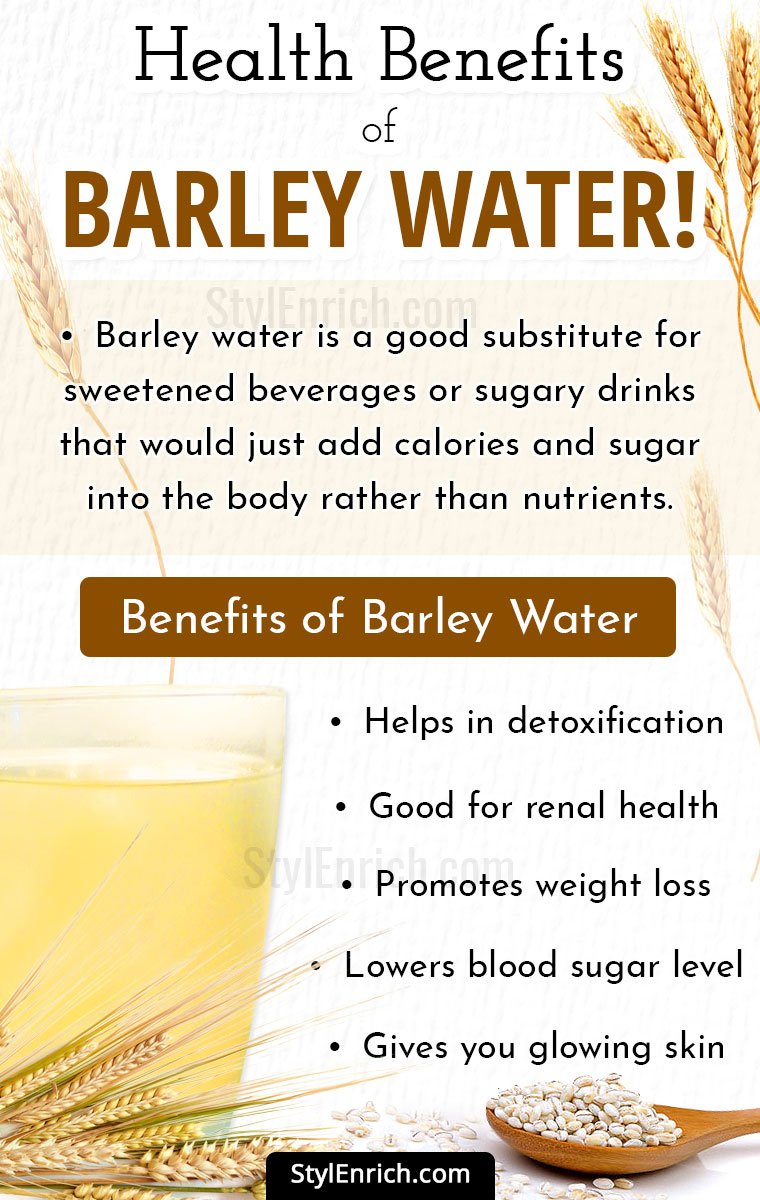 Barley, which we generally attach with a beer in our generation, has been used by our ancestors for years as a substitute to rice and also in many delicacies that are considered intrinsic for the regional cuisines. One of the popular variants called the pearl barley which has gained effect where barley grains are tossed into salads and stir-fries, the barley from which is reaching people is barley water.  Various cultures have opted for barley water as a beverage or as a cure for various ailments. Like in Greece, one of the favourite beverages called kykeon is made of barley water which is a cure for various ailments. In Britain, barley water is consumed as a hot beverage which is flavoured with lemon, sugar or other fruit juices. Even the athletes at Wimbledon are served this health drink flavoured with orange during the summers.Even we enjoy this drink, hot or cold; either it is consumed plain or flavoured with lemon.

Barley water is considered as a health booster as it is brimmed with essential nutrients like soluble and insoluble fibre, vitamins and minerals like calcium, manganese, magnesium, zinc and copper, antioxidants and phytochemicals. Let’s see the health benefits of barley water.

Use of barley water helps in removing toxins from the body and the intestinal tract and cleansing the internal organs. This occurs due to the presence of beta-glucans in the cell walls of barley.

If we look at the nutritional facts of barley water, barley water prepared from 200 gms of barley gives about 704 calories which can be burned if you walk for 200 minutes. Now that’s a turn off for weight watchers if you literally count the calories, but this water contains only 19 gms fat and most of the calorie count is from complex carbohydrates, 20gms from protein and 2 gms from fat. Hence if we look at the statistics, it is an effective weight loss drink. As it contains fibre, this drink helps to remain full for longer period of time and the cravings to keep on munching whatever comes in your hands will be reduced. Due to the presence of beta-glucan, it is good for lowering the cholesterol levels.

Diabetics can vouch for Barley water as it stabilizes the blood glucose levels.The reason behind Barley being the favoured option is it contains beta glucans that can slow down the absorption of glucose after the meal and slow down the spikes in glucose and insulin. Beta glucans can reduce the risk for obesity and can control the blood glucose levels. Barley is a low glycemic food which is helpful in glucose management. Barley also contains phytochemicals that are beneficial for controlling diabetes.

5. Gives You A Glowing And Clear Skin

As barley water is a detoxifier, it helps in removing the toxins from the body thus helping to maintain clear and glowing skin. Barley water contains a compound called azelaic acid which is used to treat mild or moderate acne and also helps to reduce inflammation associated with skin. It is also beneficial for anti-ageing as the antioxidants present in barley water helps to fight free radicals.

Barley water contains insoluble fibre available from barley that allows the good bacteria to grow and reduces the population of pathogenic bacteria in the intestine, a property referred to prebiotic. Ayurveda prefers barley water, a drink good for people with weak digestion. Barley water has a laxative effect and essential for good digestion.

Barley water helps to quench our thirst especially during summers. Barley water is a healthy substitute for caloric and sugary beverages. Energize the healthy drink with squeezing lemon juice and rock salt. It soothes the body and improves the circulation.

Hence Barley water has been used to cure kidney stones, to lower cholesterol and treat the urinary tract infection and also to clear toxins from the stomach and remain hydrated during the summers. With all the benefits of barley water, we need to know how do we need to prepare barley water.

Barley water is generally mixed with lemon, sugar or rock salt to quench our thirst. Barley can also be consumed as it is or mixed with fruit juices and relished.

Wash and soak barley for few hours. Pressure barley for 5 to 6 whistles or boil barley in water till it becomes soft and mashy. Cool the barley water very well, strain, you can add a dash of lemon juice and rock salt.

However, Barley water has the certain side effect which needs to be monitored well. Barley can lower the blood sugar level if you are consuming it extensively. Hence a regular check on blood sugar level is necessary. If you are suffering from celiac disease, you need to avoid barley as it contains gluten.

Barley water is a good way of getting your dose of fibre, vitamins and minerals. Too much of unstrained barley water can put a strain on the digestive system, hence you need to drink barley water only a few times a week that can be beneficial for losing weight and controlling diabetes and heart diseases.

Hence this summer, forget about sweetened beverages or carbonated beverages, let’s grab a glass of barley water which is an epitome of health and nutrition that hydrates and soothes our body and provides nutrients to our body thus making it a most incredible beverage in our daily diet.