Various kinds of spreads have existed in every culture depending on the season and food grains that grow in the vicinity. As kids, we have grown up on these delicious spreads. Just like ghee and white butter in India, peanut butter is a gift to the world from the United States of America. Thanks to the technology which has made everything available everywhere and lets one choose what one likes the most.

The same is with the wonder food peanut butter which has become a household item and is easily available in the market. There are many benefits of peanut butter.  Of late this particular item has become a hot favorite with the kids and is a regular item in the lunch boxes along with bread. It is also a great snack item if consumed post workout or in the morning along with wheat toast. In this article, let’s discuss the details about peanut butter nutrition facts and its benefits. 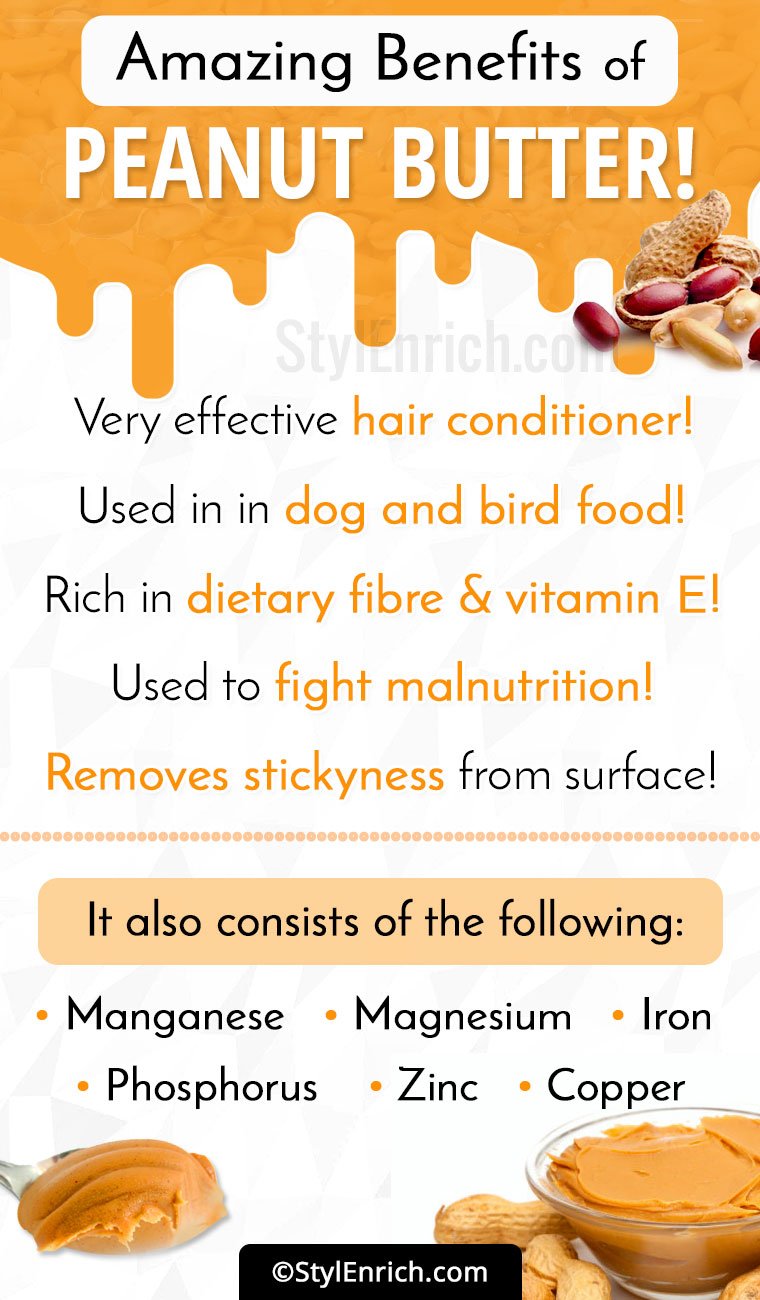 According to an article, China and India are the first and second largest producers of peanuts. The United States of America being the third largest producer of peanuts where Georgia and Texas are the major contributors and half of the American peanut is used for making peanut butter. In India peanut is consumed in large number in form of peanut oil, peanut and chili paste. Salted peanut is also consumed by a large number of people and these days it is manufactured and sold commercially in small packets.

Is peanut butter healthy is a question which runs through our minds very often simply because as per the assumption healthy food cannot be tasty. Well, the myth is busted as it is recommended by dieticians.  It is a food in form of a paste or a yummy spread made with roasted peanuts and a lot of ingredients are added to it to make it taste better such as salt, sugar or any other sweetener. Unites States is the leading exporter of this product.  It is mostly served with brown bread, toast or as a spread in the sandwich. It is also used to make granola bars. Many people look at it as an alternative to almond butter. Many confections store also sell healthy peanut butter cookies which do not contain sugar.

Peanut butter comes in two variants which are as follows:

Organic peanut butter is also available but the market is very small for this particular variety and the price is high. According to the food regulations, any product sold as peanut butter must consist of ninety percent peanuts and the remaining can be salt, sweetener, oil and tastemakers. Peanut butter nutrition is high because the authentic product does not contain any kind of artificial sweetener, coloring additives or preservatives. Hence always look for the food regulation stamp before buying it from the supermarket shelf. Most of the brands selling the product add white sugar.

Apart from using it as a spread the peanut butter has many other uses and some of them are as follows:

It is a very effective hair conditioner. Use it after shampoo and keep it for 5 minutes. Wash it off using cold water and see the difference.

it is used in dog food and the bird food in various forms.

Peanut butter cookies and balls are famous but it is also used for making flavoured jelly sandwich, crunchy bars and candies. It can also be combined with oatmeal, cheese, curd and sauces.

Plumpy nut is a variety of peanut butter that is used to fight malnutrition in various countries faced with famine. A single pack is packed with five hundred calories. It can be stored for two years. It does not require any refrigeration, cooking or any other kind of preparation. It can be consumed as it is.

It can be used to remove very sticky substances from any surface. Children often remove stuck chewing gums from the sole of the show or when the chewing gums get stuck to the hair one need not cut the hair instead apply peanut butter, leave it on for ten minutes and then slip it through. The moisture content in the butter helps to reduce the adhesive power of the gum hence it slips down.

Peanut is a very healthy snack and has amazing health benefits. It is loaded with nutrients required for a healthy body and good skin. It is used in raw form as a snack in most parts of the world and salted version is sold in many places. It is cheap, filling and easily available. Hence the how much protein in peanut butter question has been answered? Peanut oil is used for cooking as well and is good for the heart. Hence go and consume a handful of this wonder nut or enjoy this in the butter form popularly known as peanut butter with your toast. Stay healthy, stay happy!!

Peanut Butter nutrition facts, in a nutshell, can be summarised as the following:

Calories in peanut butter are around six hundred in a small hundred gram amount the smooth variety. It is composed of fifty percent fat. The protein content in peanut butter is around twenty-five percent and twenty percent is carbohydrates with includes six percent in form of dietary fiber and two percent of water. The peanut butter also has the saturated, monounsaturated fats and polyunsaturated fat.   It is also rich in dietary fiber, vitamin E, pantothenic acid, niacin, and Vitamin B 6 and B 12. It also consists of the following:

Calcium in peanut butter is around five percent, As per hundred grams of peanut butter there is fifty four milligrams of calcium.

The Process of making the wonder product is as follows:

1. Planting Of The Peanuts

The peanut is usually planted during the spring and it comes from a yellow flower. It is grown in the soil. The harvest period starts from August and lasts till October since the weather is clear. The dry weather ensures that the soil id dry and does not stick. The peanuts are then removed and go through the process of mechanical drying. After which they are unshelled in silos.

2. Shelling of the Peanuts

It is ensured that the smallest damage to the seed is prevented. It is done in a moisture controlled environment. Then the shelled peanuts are sent to the rollers for getting cracked and then start the screening process which they are checked for any kind of contaminations.

3. Roasting of the Peanut

The peanuts are dry roasted. There are two methods of roasting the peanuts which are as follows:

In the batch method, peanuts are subjected to heat in large number in an oven that revolves at about for hundred degrees. After which, they are held uniformly and roasted in the oven at one hundred and eight degrees for almost an hour. This method is effective in  use when the peanuts have different moisture contents.

In this method a hot air roaster is used. For even roasting the peanuts are rocked as they pass through the roaster. An instrument called photometer is used to indicate the completion of dry roasting. This method is preferred by large manufacturers as it lowers the rate of peanuts being spoilt and requires less labour. This method is more cost-effective

4. Cooling Of The Peanuts

After the roasting process is over, peanuts are removed from the oven. They are then placed in a blower or cylinder for cooling. There are suction fans placed in the metal cylinder which can pull a large volume of air for the peanuts to cool down more effectively. The cooling process is done keeping in mind that the moisture is retained and also the oil.  When the temperature reaches to thirty degrees in the cylinder the process gets completed.

After the cooling down process, the peanuts undergo either heat blanching or water blanching to remove the remaining coatings from the seeds. There are two processes by which the process can be done and they are as follows:

Peanuts are heated at around three hundred degrees using hot air for twenty minutes so that the skin becomes soft and it splits. After which they continuously exposed to steam in a blanching machine. The skin is shelled with the help of bristles or rubber belts that are soft. Then the skins of the peanut are put in the waste bag through blowing and the hearts are inspected and segregated.

7. Water Blanching Of The Peanuts

After being arranged in troughs, the skin of the skin of the nut is cracked on opposite sides by rolling it under sharp blades. While the skin is being removed, the kernels are subjected to a one-minute hot water bath and placed on a swinging pad with covered with a canvas on the top. The swinging action of the pad rubs off the skins and helps in fast removal. Afterward, the blanched nuts are dried for at minimum six to eight hours using hot air at fifty degrees. After which screening process id has done, inspection is carried out to eliminate the infected, burnt or the rotten variety of peanuts. In this process very often the lightweight peanut and discolored peanut is removed as well with the help of a blower. A color sorting machine can also be used for the following process.

8. Grinding Of The Peanuts

After the blanching process is over the peanuts are sent to grinding machines so that it can be manufactured into the wonder food known as peanut butter. The peanuts are then subjected to sets of grinders of different sizes. The first grinder is used for medium grinding, and the second grinder is used for fine grinding. At this point, salt, vegetable oil and sugar and other ingredients are added to the grinded product to produce the final peanut butter. This flavour is added and the process is allowed to stay homogeneous. Chopped peanuts can also be added during this stage to produce the chunky variety of peanut butter.

9. Packaging Of The Peanut Butter

Before being packed the peanut butter has to be cooled so that it be put into the jar and sealed. The mixture is pt into a heat exchanger till it cools to about fifty degrees after which it is put in the jar, vacuumed and sealed. The vacuum process ensures that oxidation does not happen and hence the food item is preserved.  The jar is labelled and kept aside till the process of crystallisation occurs. After which is is transported to the retailers and sold to consumers. It must always be stored at room temperature.

A Few Things To Remember When Buying Peanut Butter

It should always be remembers that according to the food regulations peanut butter labelled product will contain at least ninety percent to peanuts where as a peanut spread contains less amount of peanuts and is more soft and moist.  Hence do not confuse peanut butter with peanut spread at any cost. There is difference in colour, taste and more importantly the nutrition value of the two products.

So next time you go to the super market make sure to pick a jar of this yummy yet healthy snack. At times it can also be used as a comfort food and used a mood elevator. Children eat this directly out of the jar. Make sure to keep this out of their reach as the product shall get over in no time. Always store this at the room temperature. Peanut butter can also be easily made at home however it must be consumed as soon as possible for getting the maximum nutrition.