Iodine Deficiency – Signs You Are Suffering From It!

Some Surprising Facts About Iodine 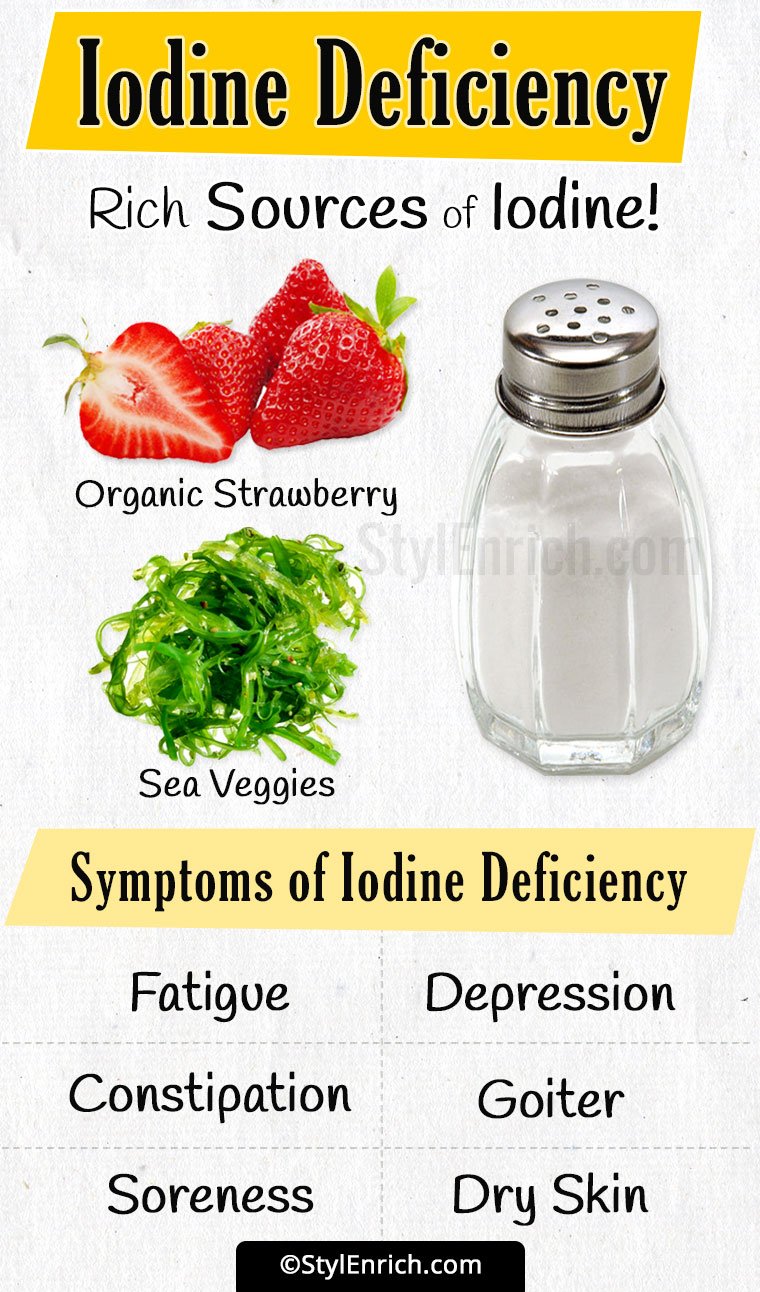 Trending
How to alleviate painful dementia

Iodine – A Key To Thyroid Health

Iodine, when this name is heard, the first thing that comes to the mind of anyone is salt. This happens because it is the most common manner to provide people with required amount of iodine. The fact is that iodine is a non-metallic mineral, which is essential for the body in a minimum quantity. The element is required for the effective synthesis of the thyroid hormones, namely thyroxine and triiodothyronine popularly known as T4 and T3 respectively. Iodine is mainly important for four functions, namely fertility, in stabilizing the metabolism in the body and body weight, in the optimization of your immunity, and for the development of the brain in the children.

Iodine is also known as a precursor to the thyroid hormones, that is widely found on the outer side of the thyroid gland along with the hormones that release from it. From the total intake of iodine, nearly 70% of the iodine is found in the tissues of various body organs like the mammary glands, thymus glands, salivary glands, the walls of the body vessels, cervix surface, eye surfaces, the mucosal surface of the mouth, gastrointestinal tract, and much more. It also holds a vital role in the growth and development of the infants and the fetuses and hence, it is found in the mammary gland too.

Reasons Why Are The Iodine Levels Are Dropping

Although iodine is taken through salt in regular meals, there are still some issues that have given rise to the deficiency of iodine. This happens due to its absence in the meals or due to the exposure of iodine to the toxic halogens like fluorine, bromine, perchlorate, chlorine, etc. in increased form. When you intake any of these halogens through medicines, food, environment or water, they occupy the iodine receptor in your body that leads to deficiency of iodine in the body.

Some of the factors that lead to the deficiency of iodine are:

Hence, it is better to have proper meals and make sure you include a required amount of iodine to avoid any kind of health problems.

Here are some of the common symptoms that indicate the deficiency of iodine in your body.

When some swelling is observed in your thyroid gland, which is visible in the form of a lump in the throat, it is known as goiter. This has been a quite common symptom of having a deficiency of iodine. Just as the swelling continues to increase, it also results in difficulty in swallowing eatables and even water in serious cases. It leaves a deep impact on the thyroid gland and also hinders its process of producing thyroid hormones. In worse conditions, goiter can also get converted into a serious condition hypothyroidism.

The patients suffering from iodine experience weakness due to low levels of energy every now and then. It leaves you tired and wiped out throughout the day, leading to fatigue. Some people also have experienced frequent blackouts in serious conditions. Hence, if your body is feeling any of these conditions, it may be the primary stage of the deficiency of iodine. Visit your doctor for quick solutions.

3. Lack Of Focus And Memory

As mentioned above, iodine is also important for the proper functioning and development of the brain. When the iodine level decreases in your body, the memory functions in the brain get compromised, due to which, your nervous system gets a deep impact. Due to this, your learning capabilities get affected, and you might also lose your focus on studies. Clouding of thoughts leading to mental confusion has been the widely seen brain damage due to deficiency of iodine. When you face difficulty in focusing or memorizing, it can lead to serious issues like Alzheimer’s and Parkinson’s diseases also.

Another widely observed symptom of iodine deficiency is sudden increase in the body weight. Even though you have improper meals, you would experience bloating. The body organs, especially the internal ones would not work properly, due to lack of required energy or potential. This may result in a decrease in the appetite or vomiting in various cases. Apart from this, the patient may also accumulate unwanted gas in the body. Hence, if you have experienced the increase in your weight all of a sudden, while your diet is normal, check out with your nearest doctor.

Depression is another symptom of having the deficiency of iodine. Iodine is an essential mineral that aids in increasing the activity of the nervous system, which also reduces other health issues like irritation, anxiety, restlessness, etc. An adequate amount of intake of iodine on a regular basis would also promote sound sleep. When you lack proper sleep it also results in the depression that is also related to deficiency of iodine. Hence, if you are facing any symptoms of depression, iodine deficiency can also be a reason for it.

Studies have proved that deficiency of iodine also leads to soreness of the breasts in women. Sufficient iodine levels help in improving conditions in fibrocystic breast disorders. Iodine has also proved to be beneficial for the women suffering from breast cancer. Hence, if you are having breasts that are painful, tender or with some swelling, during or after menstrual days, the reason behind it can be the deficiency of iodine.

Yes, the deficiency of iodine can also lead to problems in your digestive system by hindering its functionality. When your body doesn’t receive enough amount of iodine, it hinders the ability to work of the stomach muscles, which don’t contract properly. The stomach muscles hence, don’t function properly that burdens the removal of waste through the way of intestines. Thus, if you are facing constipation problems frequently, you might be lacking the adequate amount of iodine in the body.

Do you think you are getting sensitive to cold than before! This happens when your metabolism slows down. When your metabolism decreases, along with it, the flow of blood would also decrease in your body, specifically to the limbs, and your body starts freezing. However, the main reason for the reduction of your metabolism is due to lack of iodine in the body. So, if you feel cold even in the moderate atmosphere, check out with your nearest doctor for knowing your iodine levels.

Hence, iodine is surely an important element for the body, one must look after. The list of people suffering from iodine deficiency mainly includes people who are far from marine life, expecting women, the ones who are exposed to radiation and individuals facing selenium deficiency. Apart from this, the deficiency is also caused through some chemicals like thiocyanates, perchlorates and goitrogens too. The consumption of alcohol or tobacco can also increase the risk of developing the deficiency of iodine.

Although people carry a myth that iodized salt is the best source of obtaining iodine, the fact is something different. Apart from salt, there are some other sources too that come with a good amount of iodine in it.

Some of the popular sources of iodine are:

The main source of obtaining iodine is through sea veggies like kelp, hiziki, arame, wakame, kombu, and much more. As they come from the sea, they are rich in iodine, naturally. The sea veggies can be included in various salads or soups that would fulfill your daily intake of iodine in the body.

When it comes to yogurt, it is better to go with organic yogurt, that is also known as a natural probiotic. It is an excellent source of iodine, that should be added to your meals. Just one cup of organic yogurt, and you would be served with nearly 90mcg of iodine, that accomplishes half of your daily requirement. Other than yogurt, other probiotic ingredients rich in iodine are miso soup, pickles, kefir, and much more.

There are several beans that come with a good source of iodine, among which navy beans ranks the top among all. The navy beans contain nearly 32mcg of iodine in just ½ cup of navy beans. Along with iodine, they are also rich in fiber too.

Just as they are tasty, the strawberries are also helpful in getting the required amount of iodine from the body. This delicious red fruit gives you 10% of your iodine requirement, with 13mcg in it. Having fresh raw strawberries, or including the organic strawberries to juices would be much helpful.

This might surprise you, but cheese is also a rich source of cheese. You might be knowing that raw and organic cheese is rich in Vitamin B, protein and calcium, but it is equally a good source of iodine too. It provides you with 10-15mcg of iodine with only in a single ounce. Cheese obtained from goat’s milk is quite healthy as it is easy to digest too. The dairy product whether taken in raw form or pasteurized would be healthy for you if looking for a rich source of iodine.

This is mostly found ingredient in anyone’s kitchen. But did you know that it is rich in iodine too! Yes, it is the richest vegetable that contains a good amount of iodine in it. All you need to do is bake the potato along with its skin, and even a medium size of the potato would provide you with 60mcg of iodine. However, for obtaining the iodine, make sure you select only organic potatoes as the iodine can get sucked by the pesticides on other potatoes.

Along with all these, other ingredients that come with a rich amount of iodine are corn, green peas, lima beans, crisped rice, shredded wheat, raisin bran, oats, tortilla, bread, soda crackers, and much more.

Hence, if you feel any of the above symptoms, it is important to visit your doctor to get the exact solution for your health problem. Along with the natural ingredients, there are supplements available in the market that would help you obtain the required amount of iodine for routine basis. Hence, check with your doctor and begin with the best possible solution related to iodine before its too late to avoid it.

Table of Contents Hide Causes of Headaches & Migraines? Know how to…

Table of Contents Hide What is Reflexology? Time testedOrigin of Reflexology-A time…

Dementia is painful Know how to alleviate it

Table of Contents Hide What Are Illuminators?Do You Know Why Does An…