If you are having trouble in passing the stool or the bowel movement is not happening on a daily basis, it is a sign that you are suffering from constipation. Having an unhealthy lifestyle where you do not have your meals on time, do not exercise, and eat a lot of junk food, can be the reason for constipation. Other reasons for this digestive disorder are stress, dehydration, an imbalance in hormones, etc. Constipation can happen to any age group, but with few changes in lifestyle, or with the use of some known remedies, it can be cured very easily. Castor oil for constipation is one of the best-known remedies. Castor oil is so good to cure constipation that castor oil and constipation can be regarded as enemies. 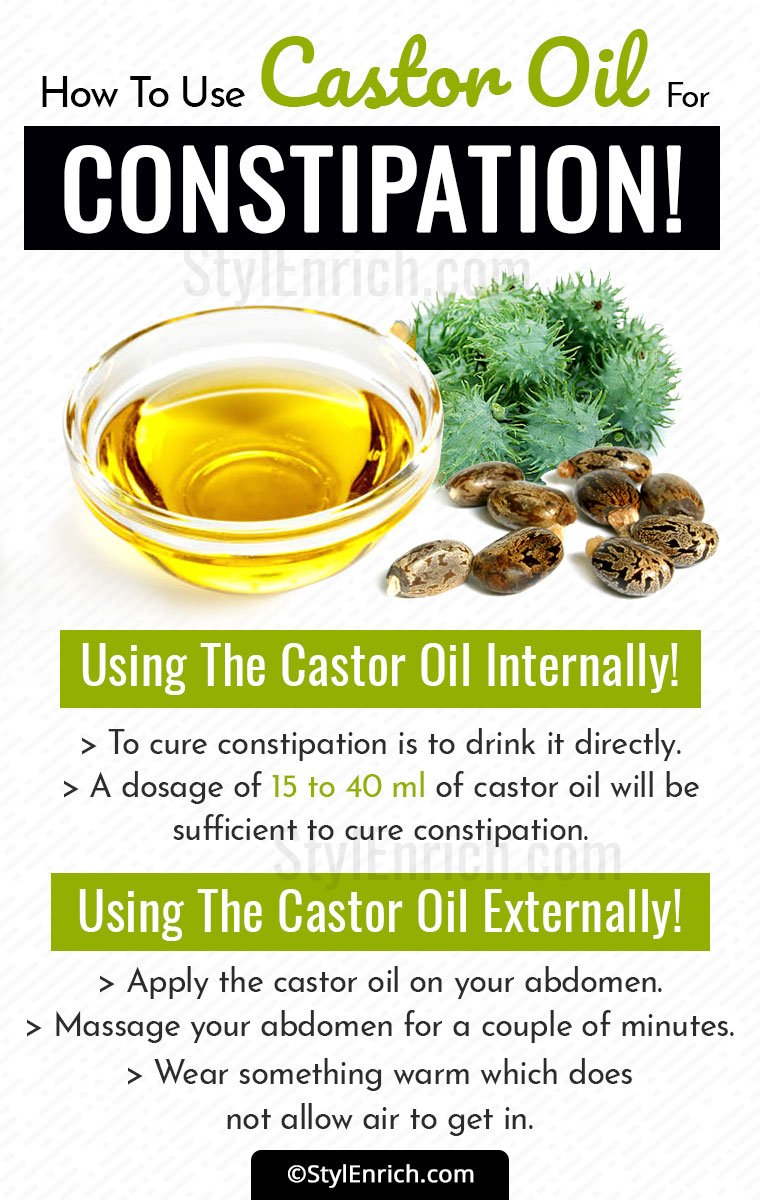 The taste of the castor oil is definitely like one of the worst nightmares but if you are constipated and want to cure it as soon as possible, you must try this ancient remedy. In this post, you will learn how to use the castor oil for constipation.

How To Use Castor Oil For Constipation?

One of the most common ways of using the castor oil to cure constipation is to drink it directly. When you are using the castor oil like this you have to be precise with the quantities of the oil. A dosage of 15 to 40 ml of castor oil will be sufficient to cure constipation in an adult’s case. In case you consume more, it may lead to diarrhea even. So taking the right quantity is very important. You must consult a doctor to find the quantity that is right for you.

Here is a list of right quantities of castor oil for different age groups.

Now you can either drink the oil directly by taking it with a spoon or if you cannot bear the taste of the castor oil as it has a foul stench, then you can even mix it with water. If you want to try it with a juice then the best options are orange juice, cranberry juice, ginger and lemon juice, or prune juice.

You need to apply the castor oil on your abdomen to restore your normal digestive system and cure constipation. For the best results make sure you are using pure castor oil and also using the right quantity.

After you have massaged your abdomen with castor oil for a couple of minutes wear something warm which does not allow air to get in. You can even wrap your abdomen with a warm piece of clothing. Let the warm cloth be wrapped around your abdomen for a while and in some minutes you will start feeling the bowel movement.

You must understand that if you are using this method instead of drinking it directly or with something, you will have to use more quantities of the oil.

Is Castor Oil Safe To Use For All?

The castor oil is not recommended to be used by all the people because of its properties. It might have some side effects on people with a medical condition. Following people are not advised to use the castor oil:

Other Precautions To Take With The Use Of Castor Oil

1. Do Not Use It For A Long Period

If you start using the castor regularly for a long time, then you might be affected by the side effects. The castor oil tends to make the intestine muscles weak which will lead to chronic constipation. The castor oil also decreases the quantities of potassium inside our body’s system. With a use of castor for a long time may also prevent your body from absorbing the required quantities of potassium.

2. Be Punctual With The Timings Of ConsumIng Castor Oil

3. Do Not Use The Castor Oil For Constipation For More Than 7 Days

If you have been using the castor oil and you see no positive effect in your digestive system, then you must consult your doctor and definitely not use it for more than 7 days. Using it more can lead to severe pain in the abdomen area, nausea, diarrhea, and even make your intestines weak permanently.

4. Avoid Giving Direct Dosage Of Castor Oil To The Infants To Cure Constipation

The castor oil should not be given directly to the infants but should be massaged on their belly instead. The direct dosage will make the situation more complicated in case of the infants if a direct dosage is given to them.

FAQs Related To The Usage Of Castor Oil For Curing Constipation

1. How Much Castor Oil For Constipation?

The dosage of castor oil depends from person to person. Yes, the dosage for different ages is different, but the amount of dosage also depends on body type and how bad is the problem of constipation. The best way to find the appropriate castor oil dosage for constipation is to consult a doctor.

2. Is Castor Oil Good For Constipation?

Yes, the castor oil is good is good for constipation, but only if taken in right quantities.

Read more – A To Z Guide On The Miraculous Effects Of Castor Oil For Hair!