Goat Milk – Is It Really Healthy for You?

When it comes to milk, generally people go for either cow’s milk or buffalo’s milk as it is considered to be healthy or used on a regular basis. However, they are also a prime reason for gas, bloating or any other digestion related problems. In such conditions, even the doctors would advise having goat’s milk, which is also a healthier option. It is highly recommended to be consumed raw or organic. Regular intake of goat’s milk lowers the chances of allergies and digestive disorders to a great extent. Hence we bring here amazing health benefits of goat milk. 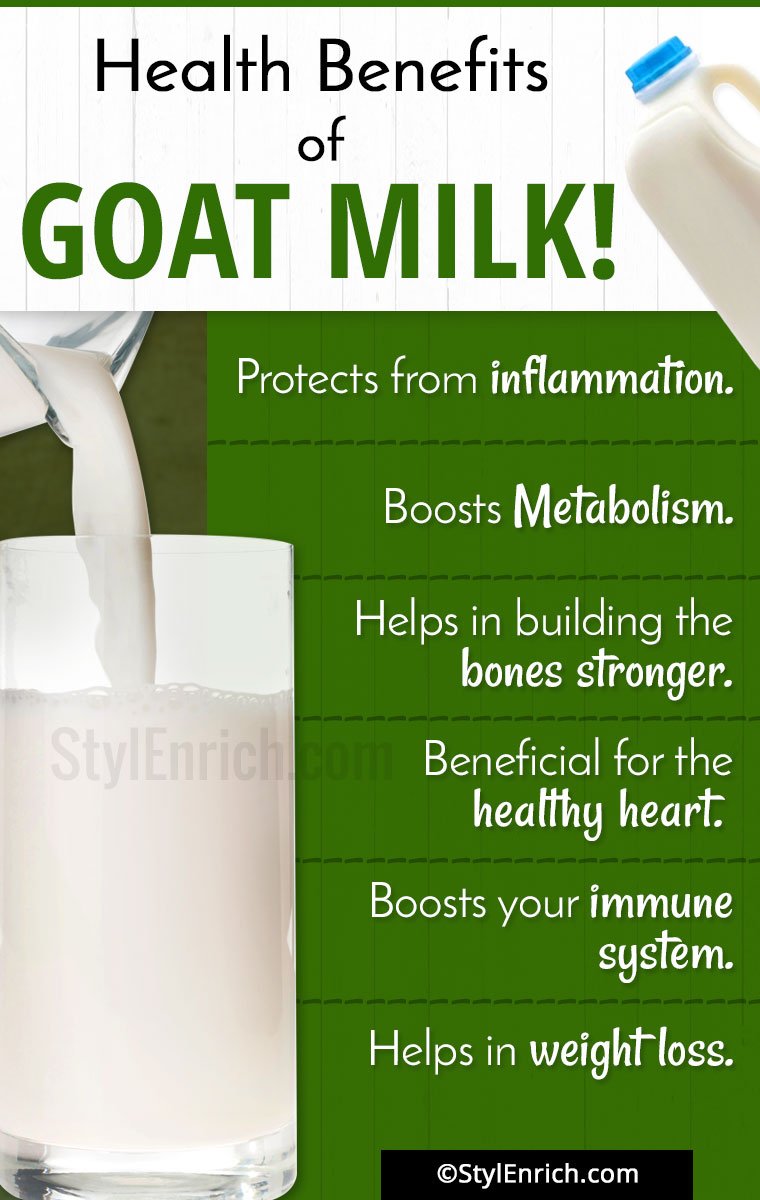 Goat’s milk is rich in nutrients like proteins, calcium, Vitamin A and potassium. However, it contains folate, selenium, omega-3 and Vitamin B12 in a very low quantity. Here are some health benefits of goat milk.

A popular reason for the increased consumption of goat’s milk is that doesn’t instigate inflammation. The doctors highly recommend patients having bowel inflammation to consume goat’s milk as it protects against the reactions leading to inflammation, and also controls them. The goat’s milk contains specific enzymes that help in smoothing the gut from inflammation. Hence, it is beneficial for a healthy tummy.

2. Boosts Metabolism In Your Body

Consuming goat’s milk would boost your metabolism for elements like copper and iron. This is necessary for the people who are facing digestion problems or having limitations in absorption. It provides you nearly all nutrients you require on a daily basis like calcium, Vitamin B, phosphorus and potassium which is helpful in the metabolism of your digestive organs and process. This helps in quick recovery for anemia patients.

3. Helps In Building The Bones Stronger

As goat’s milk is rich in calcium, it is obvious it helps in building your bones strong. When compared to other milks, it gives you a much amount of calcium as compared to others. It comes without any kind of side effects, and also confirms that the calcium gets deposited well and remains steady in your body. Hence, in this way, your bones wouldn’t feel the density of calcium and would remain strong.

The chemical composition of the goat’s milk is that it is similar to that of human breastfeeding. It is far more healthy than other milks, as it gives more nutrients to your body, as the chemicals move through the various systems of your body. It gives less pressure on your digestive system, so that your digestion process moves smoothly. The goat’s milk is also espousing in the body.

5. Beneficial For The Heart Health

A number of fatty acids in goat milk is twice than the cow’s milk. This maintains the cholesterol balance in your body. The balancing of the fatty acids is quite critical for your body to avoid situations like strokes, atherosclerosis, heart attacks, coronary complications, etc. The milk also contains a good level of potassium, which is essential in reducing the blood pressure in your body, and also gives relaxation to the blood vessels by reducing the stress on the cardiovascular system.

7. Essential For Growth And Development

Protein is one of the richest elements obtained from goat’s milk. Protein is quite necessary for the development and growth of body cells, muscles, tissues and bones. The proteins are also important in mending the blocks of the same and giving you a smooth working of the systems. The adequate amount of proteins it gives also protects the process of metabolism and helps in the overall growth for a healthy life.

No doubt goat milk contains a good amount of fatty acids, but it is low in fats. This makes it beneficial for the people who are looking for a healthy diet, while losing weight. It gives you a benefit to reduce the extra kilos, without making any changes in your regular diet for getting complete nutrients. The calcium in the milk cuts off the unwanted body fats, a part of extra calories, controlling your diet for weight loss.

9. Protection Of The Environment

The digestive process of the cows makes them suffer from risky flatulence, which is extracted from them in the form of methane. This gas is highly destructive for the atmosphere as well as the ozone layer, leading to ozone degradation plus global warming. Increasing the production of goat milk would protect from all such problems, which tend to be dangerous for the global climate.

The milk obtained from cows contains elements like bovine growth hormones, as well as, bovine somatotropin. These elements increase the production of milk in the cows artificially. When it comes to goat milk, these elements are found in rare quantity. The milk is used for tassels in agriculture, it is nutritious and not lethal.

11. Acts As A Nourisher And Rejuvenator

The goats are related to characteristics like vitality, flexibility and stamina, which make them a bioorganic sodium animal type. This element is vital for supporting the functioning of the joints. In the ancient times, the raw milk of the goat was used for nourishing and rejuvenating the exhausted nervous system.

Having the problem of lactose intolerance? Make sure you don’t include goat milk in your diet. Goat’s milk contains less lactose as compared to the cow’s milk, and hence, it can be easily adopted by the human body. The goat’s milk is easily digestible, so it is also recommended to the people who are facing lactose intolerance to a limited quantity. However, it is advised to visit your doctor before starting with goat’s milk.

Here we have seen health benefits of goat milk. Henceforth, a cup of goat’s milk in a day would provide you with all the necessary nutrients for the day to day life.

Reasons Why Goat’s Milk is Better Than Cow’s Milk

Confused whether to select goat’s milk or cow’s milk! Let’s try to solve your confusion with the following question answers.

1. Which Of The Milk Is More Allergenic?

When it comes to allergenic, goat’s milk is less allergenic as compared to the cow’s milk. There are many people who face allergies from cow’s milk like diarrhea, vomiting, skin problems, etc. A major effect of the allergy is marked as anaphylactic shocks. The reason for the allergy is the protein present in the milk named Alpha s1 Casein which is less in the goat’s milk. As the cow’s milk contains it in high quantity, it is considered as an allergenic ingredient.

2. Have You Heard Any Of Them Being Naturally Homogenized?

Just take a glass of cow’s milk and a glass of goat’s milk. Place both the glasses in the refrigerator for a night. Check the glasses the next morning. Which one is the same? Yes, the goat’s milk would be in the same texture as you would have placed. While the cow’s milk would have departed into two portions, the cream milk on the top and the skim milk at the bottom of the glass. This separation is caused due to the compound agglutinin present in the cow’s milk. Hence, the cow’s milk goes under the process of homogenized at the dairy. This process works on the cell wall of the fat globule which releases free radical. This free radical can cause serious damages to the DNA resulting in cancer. When it comes goat’s milk, it contains small fat globules and zero amount of agglutinin, and hence, it is a natural homogenized, safe for your DNA.

3. Which Of Them Is Easy To Digest?

The goat’s milk includes small fat globules and rich amounts of chain fatty acids. At the time of digestion, the fat globule and the fatty acid would have a good area, resulting in the quick and easy digestion process. The proteins present in the goat’s milk get clumped up in the tummy and form soft curd like a bolus, which is not formed in the cow’s milk. This also activates the digestion process of the proteins, which is not similar in case of cow’s milk.

4. Which One Deals With Lactose Intolerance Easily?

Nearly all kinds of milk contain a good level of lactose, popularly known as milk sugar. There are many people who are facing the deficiency of lactase, which is also known as digest lactose. This deficiency is known as lactose intolerance. Goat’s milk contains less amount of lactose as compared to the cow’s milk, and hence, it is easy to digest. It is, thus, recommended to the people suffering from lactose intolerance deficiency. The goat’s milk also has a good capability to absorb the left-over lactose, preventing from the disorders resulting in indigestion.

5. Which Is More Matching For The Human Body?

While looking at keeping the biochemical issues of both the goat’s milk and the cow’s milk, the goat’s milk includes a good quantity of fundamental fatty acids, namely, linoleic and arachidonic acid. It is also rich in Vitamin B6, A and niacin. The goat’s milk is also a superior ingredient containing potassium too, which acts as an alkaline to the body. All these qualities are missing in the cow’s milk. The cow’s milk doesn’t have potassium in it, which results in a reaction in acidic ways. Hence, consuming goat’s milk for the human beings is quite indorsed.

The cow’s milk is no doubt good for health, but in some cases, and on the basis of thermodynamic studies, goat’s milk contains more nutrients, for a healthy body.

Cautions To Look After Before Beginning With Goat’s Milk

Goat’s milk henceforth is a superior choice than any other milk, especially the cow’s milk. The health benefits of goat milk carry like minus allergenic, quick to digest, excellent biochemically, etc. makes it healthy for daily consumption, leading to a healthy and strong growth and development of the body organs with a smooth functioning. So, it can be said, yes, goat milk does body good.