Is your clock alarming you that you are late and have no time to spend with your hair? This is the case with nearly 7 out of 10 women, even though they come with short hair. Apart from this, short hair is also carried out by women who find it hard to manage their long or medium hair daily while trying to meet the routine tasks. Here is a solution to your daily chaos of managing your short hair. Here is a collection of cute easy hairstyles for short hair that would give you a relief and that appealing look you want to carry while stepping out. 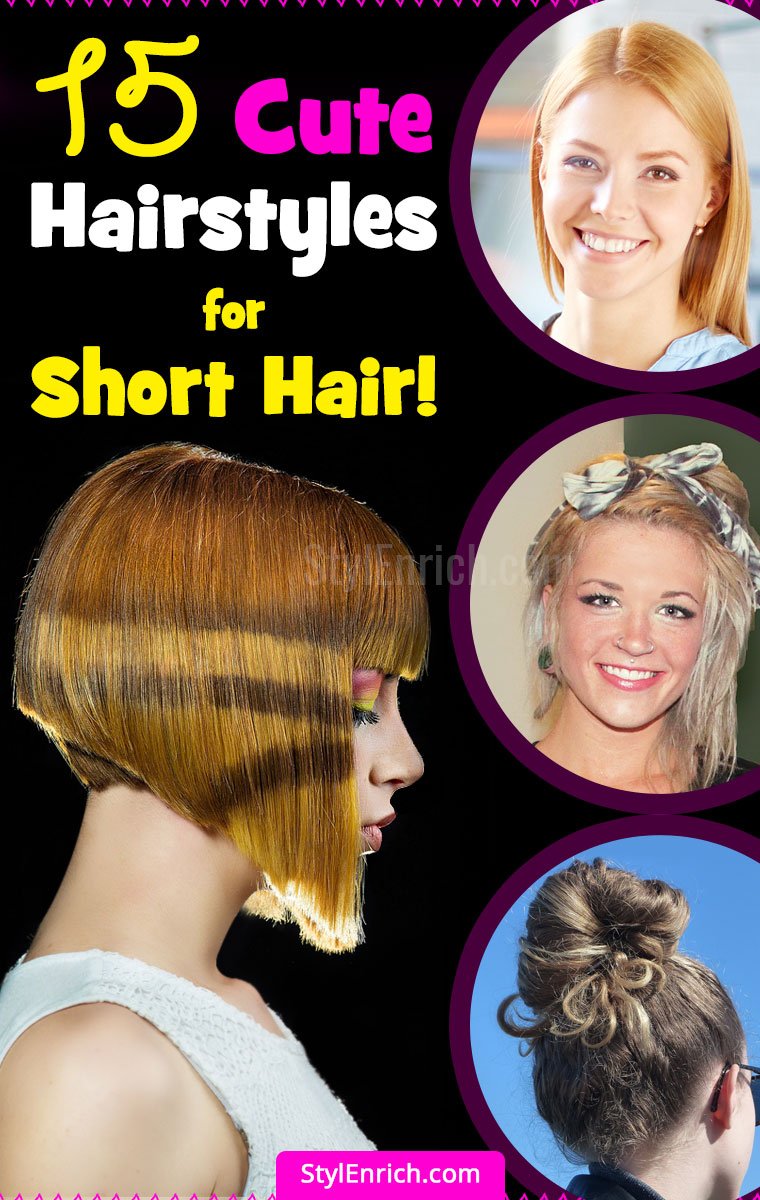 Trending
How to alleviate painful dementia

Messy buns have always been the priority of women who are looking for the quick hairstyle for both occasional and formal looks. The hairstyle is simply made out by getting a slightly loose bun on the mid back side which is a little high. The bun is given a messy look. You can also add a headband to the bun with dual strands to create a hill like puff in the centre.

This is the best hairstyle for women who lack volume and have thin hair. The ponytail is given both normal and high tie up. Forgetting this hairstyle, the hair is divided into two portions, vertically. From the lower portion, a ponytail is formed that is slightly up than the lower area, while the other ponytail is tied on the top and is then flattered to give volume.

Want a quick yet dazzling hairstyle for your picnics or other parties? Here is a hairstyle for short hair that is simple to make. The hair is given a folded braid and is pinned up in the side of the head. The folded braid is further gently pulled on the top side for giving it some volume. The hairstyle gives a clear front as the hair is completely tied up.

Tensed with the natural curls you are having? Here is a hairstyle that would give you a fashionable look quickly. The hairstyle is made by simply placing the headband covering your head completely from the front and back. It also looks similar to a huge ponytail which is carried out during beach vacations, or summers.

The reverse French-twist ponytail is a hybrid of French buns and ponytails. The modern hairstyle is carried out simply by making a French roll and twisting it on the reverse side and then forming a ponytail out of it. The hairstyle not only gives you a volume but also ties the hair behind. For more attention, you can add some side straight strands to the hairstyle.

One of the quick hairstyles, this hairstyle is used for the neat bun for the women with layers short hair. For making this hairstyle, a lower ponytail is made using a rubber band and a braid is formed from it. The braid is then knotted to a lower bun fixing the end of the hair inside the bun using pins.

This hairstyle is quick to get and also gives a cool look over casuals. The hairstyle can be made by taking a small portion from the top side of the head and giving it a firm twist. After fixing the twist with a pin, the hair is slightly spread on the top. The end of the hair is given curls in the end for a curvy look. You can also add some highlights to the hairstyle.

This hairstyle is proper if you are looking for some volume to your hair and your bun too. For getting this look for casual and formal events, you simply need to carry out high ponytail by finely combing the hair. After that, simply wrap the ponytail and during the final knot, leave the ponytail half while removing. Spread out the bun forming a fan and pin out the remaining ponytail using pins.

This hairstyle gives a funky look for colleges, outings, picnics, etc. The hairstyle is made by forming three ponytails in more a low situation which are tied using rubber bands. The ponytail is then folded and twisted using ends forming updos. For more elegant effect you can have some hair colour to highlight the ending and the twists.

Want to have that Vintage effect on your facial looks? This Vintage short hair hairstyle would surely bring you towards it. The hairstyle is carried out by simply pinning up the front forehead hair giving a puff like a look on the top side. The sides are left open for a wow effect to the pug. For more styles, you can gently pull the puff outside to add some volume.

Waterfall braids are the best hairstyle for every kind of face cuts. The hairstyle is made by driving a braid from the top side of the hair while in the middle, small strands of the hair from the side are brought and given throughout weaving from the braid. To add more attractive styles, the hairstyle is given curls at the end for giving volume.

Want a sophisticated look with short hair with a clumsy look? The hairstyle is simple and is also carried out for routine wear. To get the hair look, every hair is combed on the right side. After that, tie a small braid using a rubber band. The hair is given side look with a puff like an appearance. The braid is given a loose look with straight side flicks.

Want to give your short hair a curly look with a primary school hairstyle? This is the perfect one that would suit you. The hairstyle is made by combing out two ponytails by dividing the hair into equal portions. The ponytails are then given curly ends for that flawless look. The hairstyle is mostly carried out by kids in schools or parties over casuals.

This hairstyle would surely give your toddler that wonderful angel looks in functions. The hairstyle is the best if your baby hates the front coming hair strands and want the hair to remain backside. For making the hair, small strands of hair are taken and tied with a rubber band. After that, the half portion of the tiny pony is taken while forming the second ponytail.

The short hairstyles come with an adorable touch whether it is carrying braid, bun, puff, updo, and much more. The hairstyles can also include haircuts and after that gently designing the hair with fingers for dressing them. The easy hairstyles for short hair are widely selected by working women or female attached to sports.

If you are also passionate about getting new styles on your short hair, try out any of the hairstyles above and see the magical changes it brings to your look.

Read Next – How to Get Fabulous Haircuts for All Types of Face Shapes!

Table of Contents Hide What is Baking Soda? Make your face masks.Benefits…

Table of Contents Hide Smokers worldwide continue to rise, and become the…

Dementia is painful Know how to alleviate it