Eyeliner Ideas – Top 20 Eyeliner Styles Which You Will Surely Love!

Some Secret Tips For Using The Eyeliner 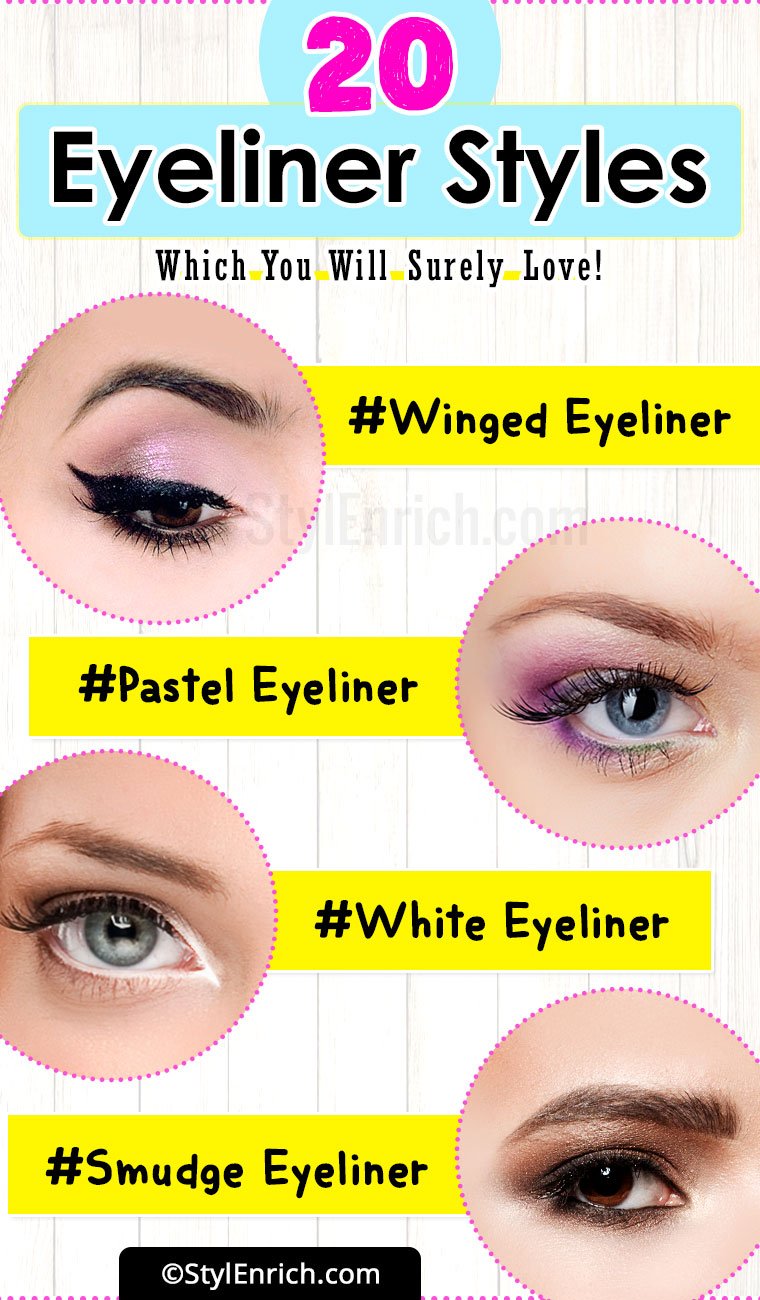 Different Eyeliner Ideas You Would Love To Apply

Eyeliners simply add magic to the look of the eyes. Simple a dark stroke of the eyeliners would transform thefacial look, especially the eyes. There would be no makeup styling that would be complete without that dark black line over the eyelids. They simply help you boost your facial look with a dramatic touch. No matter whether you go for an eye pencil, liquid liners, or gel liners, you would be provided with the best eyeliner styles for that bold and wild look.

When it comes to using the eyeliner, there are a number of different tricks and tips that give out the best results with the desired finishing look to the eyes. Here are some of the best eyeliner ideas for decorating the eyes to give them a distinguished look. 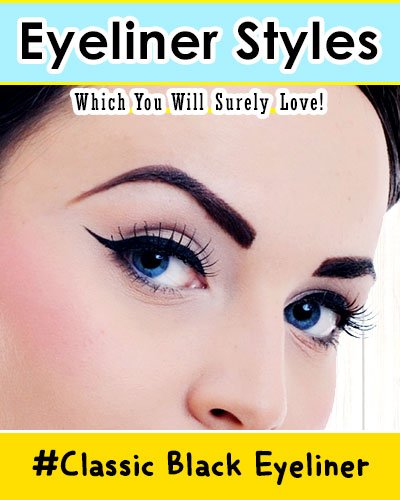 The classic black eyeliner is among the best eyeliner ideas for the beginners. It comes similar to the cat eyeliner, with a dark flaunting slight curve line over the eyelids sharpening on the inner ends.They are adapted for a simplified look by the girls getting ready for a small occasion in casuals or evening parties. 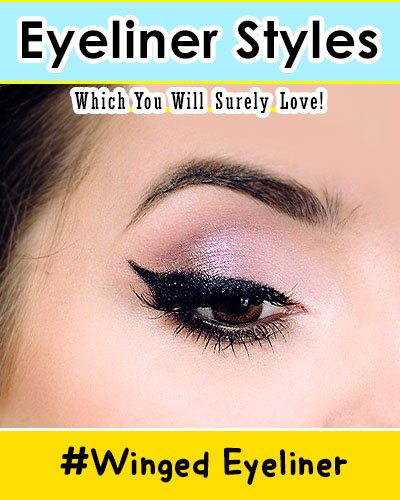 Nothing can give you that retro touch except the winged eyeliner styles. With a bold look, the eyeliner is given a thicker stroke on the eyelids, which slants and gets a thick curve on the end forming a wing shape. The winged shaped eyeliners come with a sharp corner in either straight or curved line. 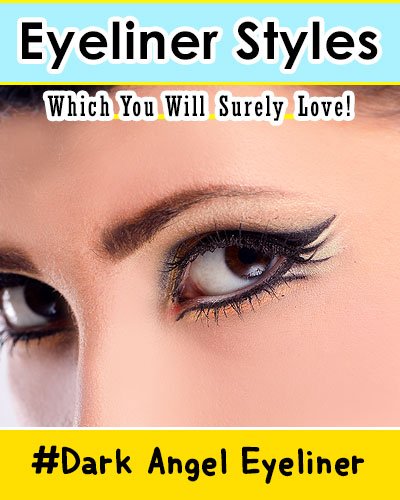 Want to add some themed look to your eyes and makeup! The dark angel appearance is the ideal one to select which comes with both black and silver shades on the eyelids and below the eyelids giving a curvy opening. The dark angel look is mostly combined with colors of which, one is black and the other is based on golden or silver grounds. 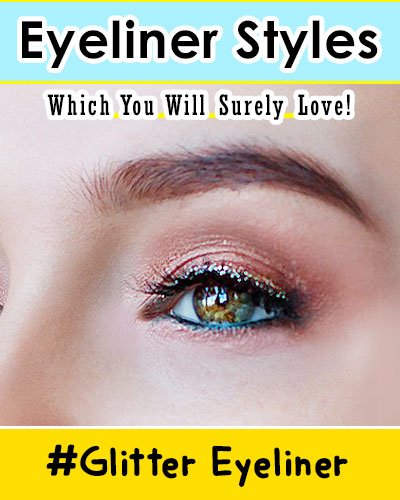 This has been a widely opted look for festivals or marriages. The eyeshadow and the eyeliner are given similar color effects, while a thin line is drawn with ended curve forming an eyeliner. The glitter eyeliner can be used in a number of designs with curves, dark lines, in either gold, silver or other colors. 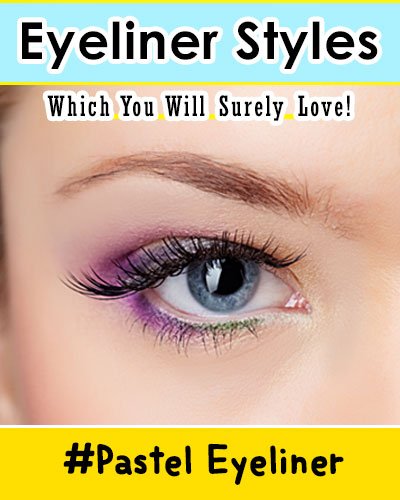 One of the trendy eyeliner looks that give a colorful look to the eyes is the pastel eyeliner styles. The eyeliner is made using either a single color or combination of various colors forming a rainbow on the eyelids in a curve and sharp end. 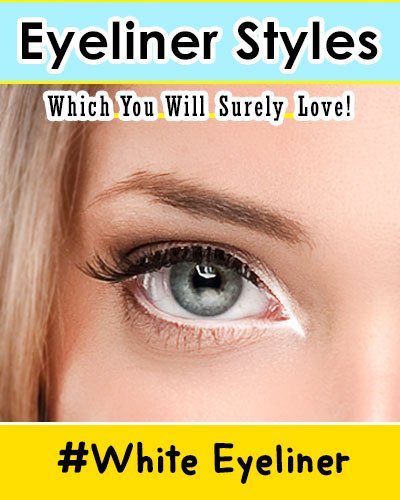 The white colored liquid eyeliner styles are much helpful in giving your eyes a brighter look. It simply adds some lavishness to the eyes with curve beak like ends in the inner corner with thick strokes. 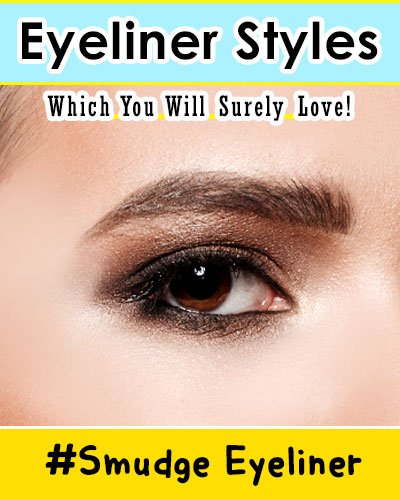 Preparing to go smoky look for any party! The smudged eyeliner would give you the best look with an eyeliner shade giving black a greyish look. The eye corners and both the upper and lower portion are given similar effect using black eyeliner and spreading it out. 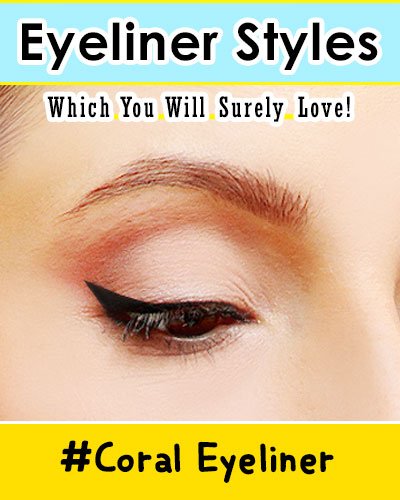 A magnificent look is obtained for daytime events and parties with the help of liquid eyeliner styles by forming a coral designer. The eyeliner is given a sharp curve in the upward direction forming a triangle. You can go for any color for the same, however, black is widely used. 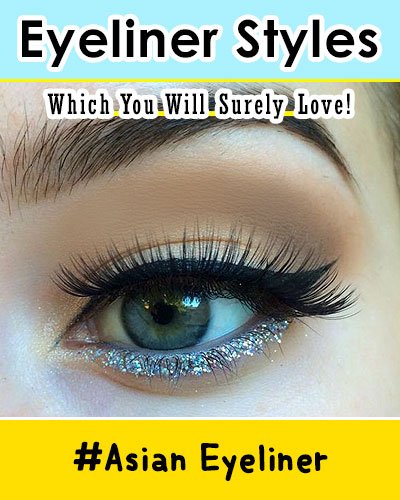 The winged eyeliner styles are given a new decorative touch when it is mixed with other colors with black. The eyeliner is made with long curves in separate style giving the eyes a long look. To make it more adorable glitters is also added to it. 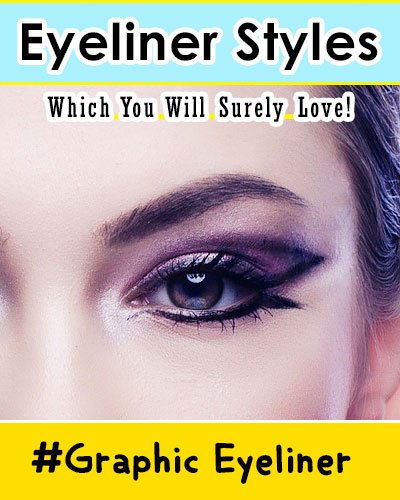 If you are looking for eyeliner ideas for beginners the graphic designs would be perfect for you. With a number of variations, they come with dark black forming different geometrical shapes. You can also make the pattern using colorful eyeliners.

Let us see the cool tips for applying black eyeliner in different ways. 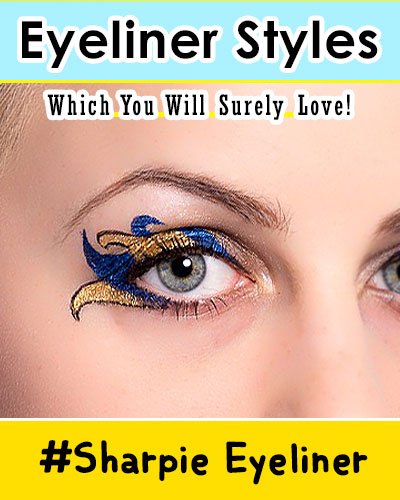 Sharpie eyeliners are popular for their floral looks they give out. With lovely colors, they make floral designs on the upper eyelid, and can also be made on the lower portion. The upper eyeliner is given broad base which is perfect for the girls having small eyes. 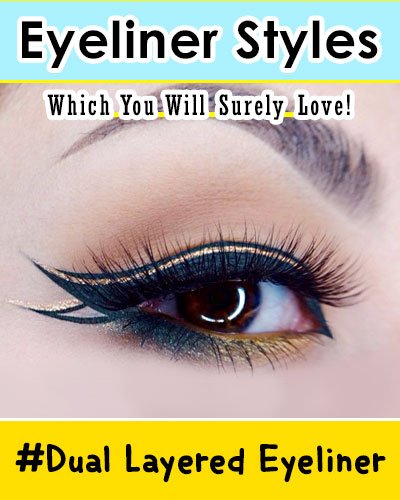 The dual-layered eyeliners have been the most opted winged eyeliner styles that are also given dual color shades. The eyeliner is given a dark and thick winged look which is further joined with another below it. The lower eyelid is given a smudge effect in black and golden. 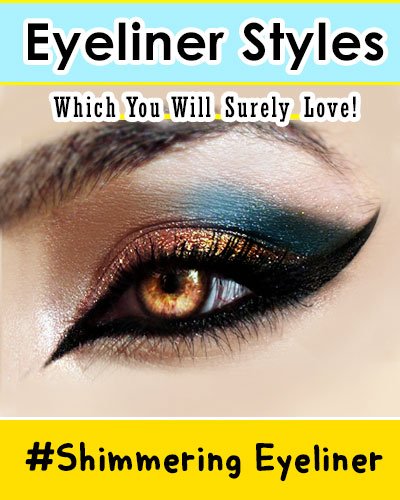 The liquid eyeliner styles are mostly adopted for special occasions or parties. The eyeliner is given a wavy look on both the corners in black, while the upper lid is given a shimmering effect with dual colors in the shiny layer. 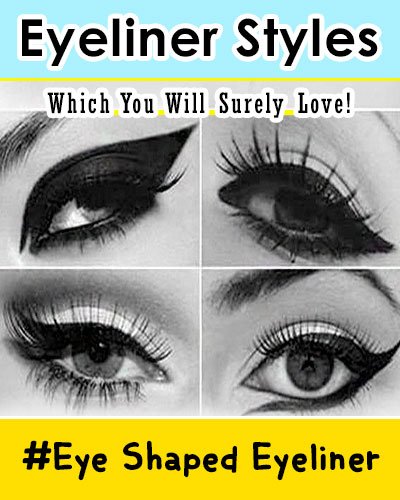 If you are not good at getting any kind of styles, the eye shape eyeliner is the perfect design for you. All you need to do is stretch out the lines according to the shape of your eye and you are done. You can carry out with black or any other colorful eyeliner, mostly gel or liquid. 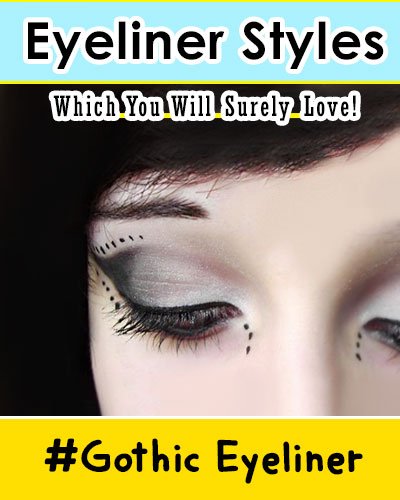 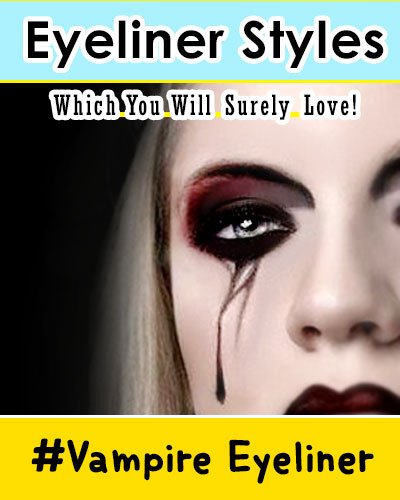 Vampire look is one of the best liquid eyeliner styles. It is given dark upper and lower eyelids in black and red color. The eyeshadow is also given a dark color while the lower eyelid is given embossed falling lines for giving it actual effect. 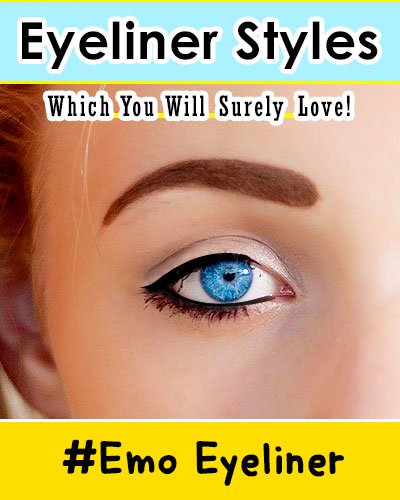 Emo eyeliners have been worn mostly by the teens preparing for parties or even for outings. This eye makeup is simple to apply as the inner eye is filled completely with eyeliner in dark black color. With points on both the corners, it gives the best outline effect. 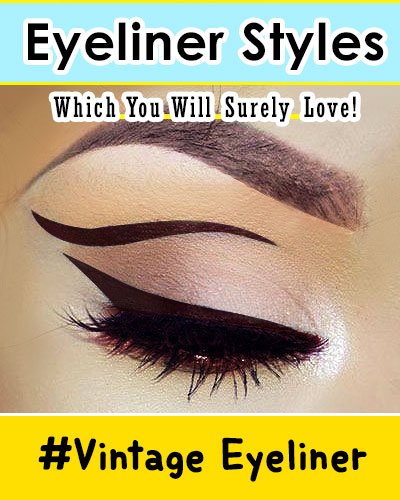 This kind of winged eyeliner styles is also known as mirror effect styles. The liner carried out on the eyelid is simply copied over on the upper side forming the same curve in dark and thick outlines. They give a complimenting look when the eyes are closed. 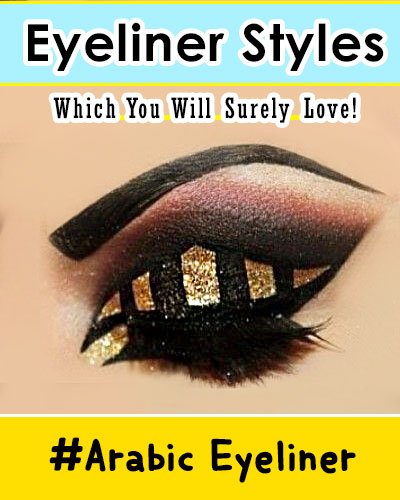 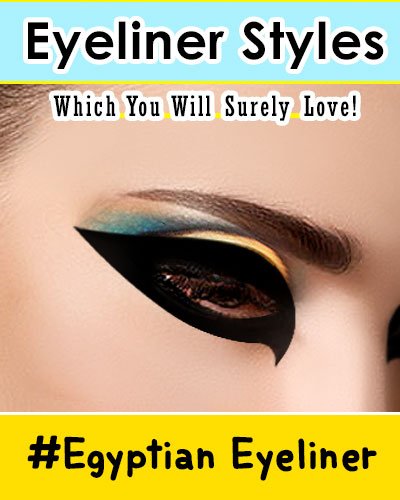 The Egyptian eyeliners ideas are well known for the long ending lines they come with. Usually carried out in dark black color, they are now also given greyish or any other color shade that covers the complete eye along with the upper eyelid. They can also be stretched with a single line or other shapes inspired by the Egyptian mythology.

The eyeliners are generally stretched out on the basis of the shape of the eye or according to the facial shape. No doubt the pencil eyeliner is quite popular and the basic one, women are now moving towards the cream eyeliner or the liquid eyeliner. They are hard to use but give a completely finishing look whether you go with curves or straight lines. However, if you are willing to for a darker and bold look, you better go with the gel eyeliner.

So, what are you waiting for? Grab your best suitable eyeliner and give yourself that wildcat looks for a stunning impression.

30 Secret Eyeliner Hacks To Get That Perfect Eye Look!

How to Get Bigger & Fuller Lips With Makeup Tricks, Tips & Hacks?

I have a keen interest in natural & herbal remedies. I prefer to use organic ingredients in day to day life wherever possible. Researching and sharing my knowledge about organic lifestyle is what I enjoy the most. I stay in Mumbai, India with my family.

How To Grow Tomatoes Step By Step?

How To Overcome The Weight Loss Plateau?