Some Fun Facts About Eyeliner 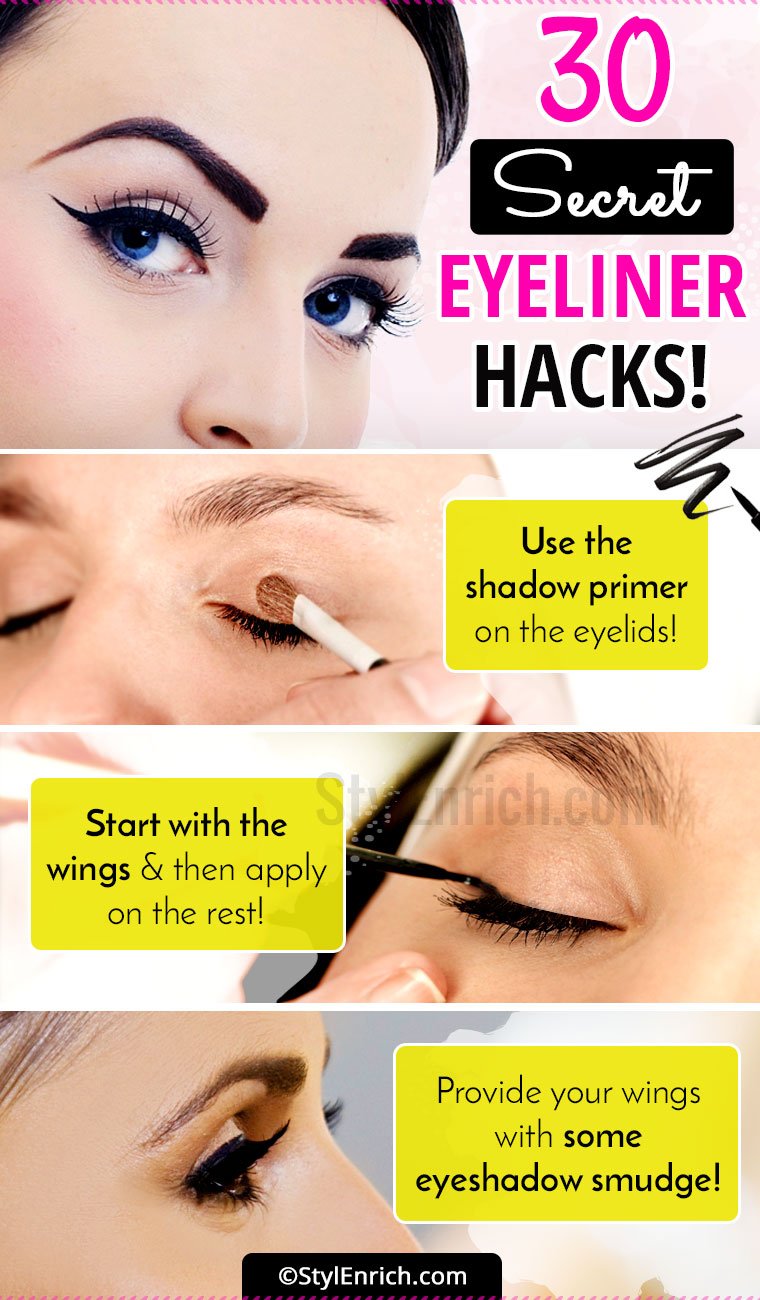 Eyeliner –An Important Ingredient For A Perfect Makeup Kit

Have you ever imagined getting ready for any occasion without eyeliner in the makeup? 9 out of 10 would admit that decorating the eyes with eyeliner is equally important as other makeup ingredients for getting a completely embossed outlook. Hence, to give your makeup a really appealing look, you must have that bold eyes highlighted using eyeliners. Priory, the eyeliners were used in the form of Kohl by the women, men,and kids also. However, with the passage of time, it got an advanced form, eyeliner, which was then after used by women only. The eyeliners are no doubt used by everyone, it is the best for the women having small eyes for giving their eyes proper look. But make a point, getting that cat look is not as easy as you are thinking. It is one of the hardest parts of getting that perfect makeup on the face. There are various ways you can apply the eyeliner, using a number of eyeliner hacks for making the application easy and simple.

So, gather your eyeliners, kohl, eye pencils, etc. and let’s start practicing some of the best eyeliner tricks that would make your tough job easy in few minutes.

1. Know Which Eyeliner Is Best For Your Eyes

Different eyes have different shades, and so does the use of eyeliner vary. The eyeliner applied to eyes that have monolid eye shape would be different than that applied to the almond eye shape. Similarly, other eye shapes include round, hooded, downturned, upturned, etc. So, have a look at the eyes shape you carry before heading towards the eyeliner for getting that desired look.

3. Begin The Experiment Rather Than Just Watching

The eyliner hacks tutorial would no doubt give you the best guidance for making your eyes look awesome, but merely looking different tutorials isn’t enough. You need to experiment what you are taught in the tutorial. Don’t be afraid of taking a chance to apply getting conscious about the thickness and the angles as they would become perfect once you start practicing it on the eyes.

4. Want That Straight Line! Use A Paper Piece For It

This has been one of the various eye makeup hacks to line up a straight line giving the eyes a perfect corner and angle. For this, take a thick piece of paper, and line it up at the corner of the eyes and place it at the desired angle at the wing corner. Now, take the eyeliner crafting a line as you press the paper drawing a straight line.

Do you wear glasses? Here are useful makeup tips for you with glasses on!

7. Start With The Wings And Then The Rest

According to the winged eyeliner hacks, the eyeliner should be first used to make the wings on the corner.This would be a smart move for getting a stunning eye outlook. Take the eyeliner pen and use it similar to the marker making a wing at the corner. With the help of a cotton swab, make the wings even. The last step is simply color the triangular shape. Also, make sure you don’t pressurize yourself while applying the eyeliner as getting nervous would make you draw a straight line instead of a curve.

8. Provide Your Wings With Some Smudge

This is one of the best liquid eyeliner tips one can use for smoking eyes. The tip is beneficial for eyes that are hooded, downturned, and close-set eye shapes. It is also the best tip for the women who are applying eyeliner both inside and outside lids. For continuing these steps, use a defined pencil which comes with the smallest line near to the eyelashes. For the ladies who are not comfortable with the flicks and the wings, darker eyeshadow smudge is the best supplement.

9. Replace Liquid With Gel And Get A Firm Brush

Want to make the application process quick and easy! Go for an eyeliner gel and use a firm brush for getting a foolproof design. Compared to the liquid eyeliner, using gel eyeliners are widely preferred as it doesn’t move as the liquid liners creating a mess around the eyelids. When a stiff brush is used, it gives you the wanted curves and straight lines that don’t spread out.

10. Made Mistakes While Using Eyeliner? Apply Darker Eyeshadow For A Soft Touch

Are you still in the practicing stage of applying the eyeliner! This might have given you several mistakes as it gets spread on the surroundings of the eyelids, or while drawing out the wings. To soften this kind of mistakes, instead of wiping out the eyeliner completely, darken the eyeshadow on the eyelids. This would not only provide you with a smoky eye effect but would also thinner the eyeliners in a shaded effect.

11.Don’t Use Eyeliner On The Curler For The Eyelashes

12. Say No To Felt Tip Hype If You Are A Beginner

There are many beginners who make a makeup mistake by starting with the felt tip hype. However, according to the eyeliner tips, this is a wrong initiate. It is the most uncomfortable way,to begin with, eyeliners. Instead, go for brushes as they would help you in learning in the best way.

13. Use Concealer For Giving Your Wings A Curvy Shape

While learning or applying the eyeliner, in case you make a mistake, or the eyeliner gets spread, instead of going of scrubbing and removing the eyeliner, go for a concealer. Erasing would leave dark black spots as you try to use the remover. For a change, use a concealer over the spoiled areas to fix the curve of the wings.

14. Begin Your Eyeliner With A Pencil And Cover It With Liquid Eyeliner

Whether you are in a learning phase or have already learned, this cat eyeliner trick has helped to a great extent. Avoid using eyeliner directly on the eyelids. Firstly, use the eye pencil on the lids, and cover it with liquid eyeliner which would provide you with thinner lines in a darker form.

15. Avoid Getting Nervous While Using The Eyeliner

This is a common mistake found in most of the girls using the eyeliners. Getting nervous while using the eyeliner or hesitating would shake your hands which would surely spoil your curves and straight lines. Be confident, no matter how many mistakes you have made or are going to make an eyeliner with fewer mistakes.

16. Keep Practicing For Getting The Most Wanted Look

Failing while applying the eyeliner is one of the results of those following the eyeliner tutorial.Keep on practicing the application of eyeliner as that would help you in getting professional in it. Also, make a point that the eyeliner would sit down as you open the eyes, for which you can learn and apply different mediums and techniques that would suit you completely. Begin with the eye pencils slowly moving towards the liquid eyeliners.

17. Check Out Which Suits Your Eyes And Face, The Soft Line Or The Sharp Line

The eyeliner ideas come in two different types, namely the sharp line and the soft line. Hence, before wearing the eyeliner on a daily basis, it is better to check out both the types on your face and decide which one would give you that appealing look. Liquid eyeliner and gel would be helpful for thesharp line, while the soft line would be made using the smudge brush.

18. Make The Gel Eyeliner At Home

Yes, you can now also make organic eyeliner at home itself. The homemade gel would be easy to apply than the liquid eyeliners and would give an equally thick line. For this, you need to melt your kohl pencil liner. This would make it a gel-like substance. You can apply this using a small brush on the eyelids.

19. Use A Tape For Getting The Perfect Cat Flick

Using a tape is one of the trendiest ways for having a cat eyeliner. For using this trick, you simply need a bit of tape. Take the tape and put it down. Tear the tape off from the surface until the glue on it loses its stickiness slightly. Place the tape along the sides of the eyelids in the form of a template. Use the liquid liner on the eyelid. This would help in getting the correct curve to the eyes.

21. Get The Terrific Winged Look With A Credit Card

22. Eyeliner On The Eye-Opening

Want to have that dazzling ombre effect for any party! This is an eyeliner tutorial that is easy and can be obtained by three simple steps. You just need three different lash lines of white, gold and another matching color with a darker eyeliner from the corners and then slightly rushing it to the corners using smudge brush, eyeshadow brush, etc. Gently overlapping would also be helpful.

23. White Eyeliners For Giving Your Eyes A Bigger Look

This eyeliner trick is widely opted by the women with small eyes. Using black eyeliner would not give your small eyes a big look. But a single stroke of the liquid eyeliner in white on the lower lash would help your eyes look big.

Shocking, but it is true. You can now also use a Mascara for getting that striking thin line on your eyelids. All you need to do is use a brush you use for lip liner and simply swipe it on the eyelids. This would also give you a smudge-free appearance.

This has been an inspiring eyeliner technique. For this, the eyeliner doesn’t need to be dark. For the inner portion of the eyes, use black eyeliners while the winged portion over the eyes is made using white eyeliner combined with some other colors, glitters, etc. for the eyeshadow.

This is a stylish way to wear eyeliner for a daily purpose. The wing design is made similar to the original long wing design; however, the end of the wing is given a slight round shape and is kept thelight in shade for a clean look.

This kind of liquid eyeliner tips is mostly used by the teens while attending theme parties. The eyeliner is made using two different colors. The prime winged line is followed by a different color over the black liner. It gives a perfect look for beach wear.

This eyeliner hack is getting favored these days. The eyeliner in this trick is given eyeliner on both sides that are over the eyelid and below the eyelid. With theperfect opening and closing curves, it gives aneye-opening look narrow near the nose and broad on the outer side.

It’s not necessary that the eyeliner needs to be thick. Thin eyeliners are also adopted by the women with big eyes to give some decorative touch to the eyes. Using the eyeliner, a thin line is stretched on the eyelashes. However, this technique needs a lot of practice.

Glitter has been a prominent one among the eyeliner hacks. The eyeliner in this makeup kit comes with glitter and is available in various colors. All you need to do is apply the eyeliner similar to the normal black one forming a thin layer.

The eyeliner gives the eyes a polished, clean and beautiful appearance. No doubt it is a little tough to draw out the lines, practicing the same would surely give you different ways to enhance the eyeliner designs adding colors and shapes to it.

So, if you haven’t tried out using the eyeliners, try with some useful and simple eyeliner hacks and add some more charm to your outlook enchanting the viewer with your eyes.