Cold and flu, as we all know has become extremely common today. Blame it on our lifestyles, eating habits or the pollution surrounding us. It is not always advised to take pills for cold and flu. People have increasingly become conscious of the side effects of these pills. They are moving towards healthier and organic alternatives. While there are innumerable home remedies for cold and flu, we often neglect little lesser known superfoods. One among these is oregano oils. Oregano oil for colds and flu is extremely useful. 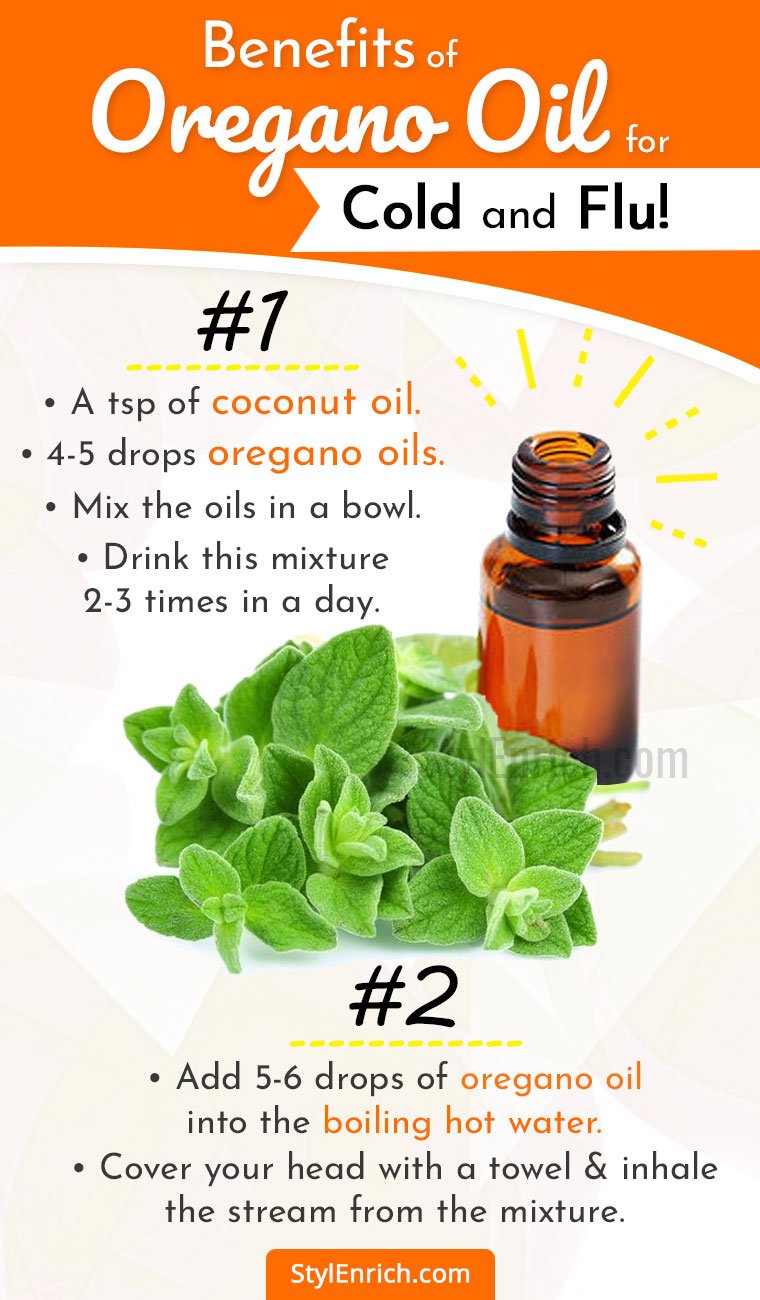 Let us first try to understand the composition and the varieties of oregano oils.

What Is Oregano Oil??

Oregano oil belongs to the mint family. The other members of the family being basil, sage, peppermint, thyme, rosemary, etc.  Oregano oil extract has a high content of essential oils that are secreted from the plant’s leaves underside. It has been used for a variety of medicinal purposed since time immemorial. Recent studies suggest that oregano oils are quite effective in treating cold and flu as well. It is also an effective micro bacterial agent.

Oregano oils are a result of the distillation of the leaves of the oregano plant. The scientific name of the most common variety of the oregano plant is called This powerful oil is distilled from the dried leaves of the oregano plant, the most common variety of which is known as Origanum vulgare. Oregano is primarily used as a seasoning in a variety of Italian as well as continental dishes as it has a powerful and distinct taste that adds that extra edge to any dish. Recently, people have started to use the concentrated oil of oregano leaves and it is being widely praised globally for its properties and benefits. The origin of the oregano oils is from the Mediterranean. The colour of the oil is dark yellow. It has a very strong aroma. This is the reason it is mostly used in cooking for adding a flavour and aroma.

As mentioned earlier, oregano oils are increasingly being used for medicinal and therapeutic purposes. The reason behind is the composition of the leaves. Let us discuss it in brief.

Benefits Of These Elements In Treating Cold And Flu

Common cold and flu are amongst the most common diseases that often attack the human body. Also, the body has become so vulnerable and fragile to outside viruses and other elements, it is very important to treat the body organically. Oregano has proved to be very effective because of the health benefit of the following elements.

The presence of this particular element accounts for the innumerable health benefits of oregano oils. The concentration of carvacrol is quite high in the oregano leaves which accounts for the health benefits. It has high antimicrobial properties. This property of the element helps improve the immunity system of the body and hence makes the body more resistant towards cold and flu.

The benefits of Vitamin C are innumerable and are known to all. It not only increases the immunity system of the body but also stimulates the production of white blood cells in the body which in turn helps in making the body more resistant to cold and flu. Not just this, it also works as an antioxidant and helps in soothing inflammation and other related diseases. Apart from this, it is quite involved in collagen synthesis which further protects the body from cold and flu.

Thymol is an essential element of oregano oils which gives it the distinct quality as a healer. Thymol has anti-fungal and antiseptic properties. The presence of these properties helps in detoxifying and cleansing the respiratory tracts. Apart from this, thymol also promotes healing and it also protects the tissues of the body’s respiratory system when the body coughs.

The presence of Vitamin E in oregano oils adds to the properties of the very enriching oil. Vitamin E protects the first defence of the body, our skin. Hence, the presence of this vitamin is a major immunity booster for the body.

This element has not one but many properties. This basically helps in the healing process when the body suffers from cold and flu. This is not only an antioxidant but also an antihistamine. This acid is quite volatile which helps in regulating the immunity system of the body. It also helps in removing excessive stress due to oxidation. This, in turn, allows the body to rejuvenate its natural defensive system against the elements of cold and flu. All these features help in the treatment of cold and flu.

Use Of Oregano Oils In Treating Cough

This is how oregano oils help in treating cough. It basically cuts through the mucus and phlegm in the body which in turn, reduces the inflammation levels which arises in the respiratory tracts. It also helps in eliminating the bacteria and the viruses which causes a cough. It also stimulates the healing process of the tissue in the affected area. If there is waste which is built up in the body, the body needs to cough to eliminate it from the body. But coughing is quite painful and harmful to the body. Oregano oils help in reducing the whole coughing process. Thus, helping the body by decreasing the pressure on the respiratory system.

Coughing is a result of infection in the respiratory tract of the body and it usually takes a chronic form. If a cough is not cured in its initial stage, it may give rise to acute and chronic diseases such as emphysema and bronchitis. Instead of going for long and expensive treatments, we can always choose more organic ways of treating our body problems. Here comes the role of nutritiously rich oils like oregano oils, the problem with these treatments it can only decrease the condition, cannot eliminate one. Oregano oils is a very good alternative to these treatments as it is quite rich in vitamins, minerals, antioxidants and antibacterial elements. They not only help in improving the immunity system of the body but also helps in reducing the inflammation of the respiratory tract which helps in reducing the pressure exerted by the body during a cough and cold.

How To Use Oregano Oil For Colds And Flu?

Process: The compounds and elements present in the oregano oil help in reducing the chest pressure. This basically reduces the chances of coughing so that you enjoy a good sleep in the night.

This will help you boost your immunity system. As the mixture will be rich in antioxidant and antibacterial activities, this will relieve your body from cold and flu.

The aroma of the mixture will be so strong that it will ease out the respiratory tract and in turn, will help in reducing the cold and flu.

A Word Of Caution

The use of these remedies should be limited to around 1o days at a stretch. The reason is the presence of extremely complex compounds and elements in the oils. Also, pregnant women, infants and breastfeeding women should not use oregano oils. People with high blood pressure should also refrain from using the oregano oils.