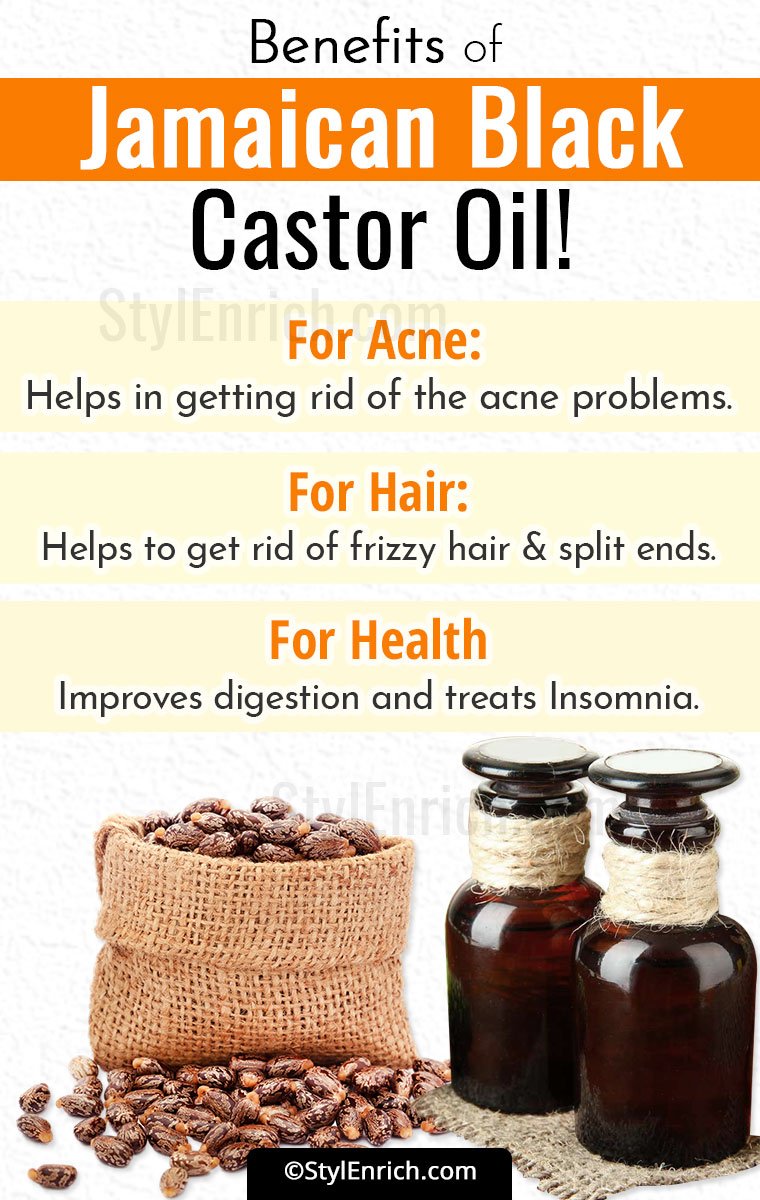 How Is The Jamaican Black Castor Oil Different From The Castor Oil?

The Jamaican black castor oil uses are similar to that of the castor oil, but there is a difference in the effectiveness and purity of both.

Both the oils are prepared from castor oil plant’s seeds but there is a major difference in the extraction. While the general castor oil is prepared by cold pressing the transparent pale yellow seeds, to extract the Jamaican black castor oil there are a number of traditional processes are involved. First, the seeds need to be roasted, then they are crushed well and then finally slow-boiled on the heat of the wood fire. This gives a thick residue which is pungent in smell, and dark brownenter.

2. Difference In The pH Levels

3. Difference In The Appearance

The appearance of both the oils is different because of the color. The color of castor oil is pale yellow while the Jamaican castor oil is dark brown which appears to be black and thus it gets the name Jamaican black castor oil.

4. The Difference In The Health Benefits

Both the oils have similar health benefits, but since the Jamaican black castor oil is prepared without any chemical processes it is healthier.

In this post, we will be talking about the various benefits of the Jamaican black castor oil for skin, hair, and health.

The Jamaican black castor is rich in omega-9 fatty acids which work wonders for the skin. It also has antibacterial and antifungal properties that can be used to cure ringworms and other skin related infections. Here are the benefits of this oil discussed in detail.

The Jamaican black castor oil has a cleansing effect on the skin and thus it can help in getting rid of the acne problems. Even the process of using the oil for acne is very simple.

To begin with, you would need the oil, hot water, and washcloth. You will have to apply the oil to the area affected by acne, but before that, you will have to warm the oil by rubbing it on your palm and between the fingers. Now the oil has to massaged gently to the face especially on the area affected with the acne. Let the oil stay for a while and to clean it up later, use the washcloth soaked in hot water.

Your face might feel tight after the treatment but you can fix it by massaging your face with few drops of general castor oil.

A combination of Jamaican black castor oil, butter, beeswax, and your favorite essential oil can make a perfect resolution for the chapped lips. Heat the Jamaican black castor oil, beeswax, and butter together. Later simply add 4 to 5 drops of the essential oil you are using. Just stir the entire mixture well and let it cool down. You are ready with your remedy for fixing chapped lips and to make it handy to use you can even use your old empty lip balm containers to store it.

The Jamaican black castor oil can not just cure skin infections but even prevent them from spreading more. The oil has antibacterial and antifungal properties which make it efficient to get rid of the skin infections. Since the Jamaican black castor oil has no chemicals the skin absorbs it easily and as it is absorbed the blood circulation also gets enhanced.

To treat the skin infections like moles, toenail fungus, and cysts, just add a small amount of baking soda to a portion of castor oil and treat the affected area. If you want, you can even consume the castor oil directly, to get rid of bacterial infections.

Since the Jamaican black castor oil is good to provide moisture and also has antibacterial properties, it can fix various issues you have with your hair. People suffering from hair problems like dandruff, hair loss etc. should definitely make use of this remedy. You can even get rid of frizzy hair, split ends, with the help of Jamaican black castor oil.

1. For Treating Dandruff And Itchy Scalp

Nutrients of the Jamaican black castor oil like Vitamin E and fatty acids are really good to add moisture to the scalp and hair, which helps in getting rid of the itch in the scalp and dandruff both. Along with the Jamaican black castor oil, you will also need a lemon and virgin olive oil. Just warm all three ingredients together on a low flame, so it does not get too hot and becomes impossible to apply on the scalp. Now you need to just massage it like any other oil and let it stay for about half an hour and wash it later.

2. For Strengthening The Hair

Take 3 tablespoons of the Jamaican castor oil and add a tablespoon of jojoba oil to it. Use this combination for your scalp. To make sure that the oil is applied directly to the scalp and does not get absorbed by the hair, make a partition in your hair, and use a dropper to apply the oil. After you are done with the application, let it stay overnight. Wash it the way you normally wash your hair. Apart from strengthening hair, the Jamaican black castor oil hair growth effect is also quite popular and is used by people who want their hair to grow in less time duration.

3. For Treating The Split Ends

Split ends not just destroy your hair but also your confidence. But if you use a mixture of the Jamaican black castor oil and mustard oil you will never have to worry about this problem. Mix equal amounts of both Jamaican black castor oil and mustard oil and use the mixture to massage your hair and scalp both. Make sure you do not forget to treat the split ends with this mixture. After you have applied the mixture, let it stay for about half an hour and wash it off with a shampoo mild in nature. You need to do the oiling only 2 times a week to get great looking, frizz and tangle free hair.

Jamaican black castor oil can help in boosting the respiratory and digestive system and even help in curing the pains in the joints.

Here are some tips on using the Jamaican black castor oil for health benefits.

If you are suffering from digestive problems like constipation, you can use this oil as a laxative too. The Jamaican black castor oil has ricinoleic acid present in it which helps the muscles of the intestines to contract and thus makes the stool pass easily. Though make sure that you are taking your doctor’s consultation before you start using for digestion purpose.

People who have insomnia can start having other major problems like losing a lot of weight, not able to work or perform well, not having an appetite, etc. This can lead to major dysfunction but it can be relieved with a variant of Jamaican black castor oil.  You just need to massage the oil to your eyelids without letting it enter inside the eyes and it will induce a comfortable and sound sleep.

1. From Where Can The Black Jamaican Castor Oil Be Purchased?

Finding the Jamaican black castor oil is not so tough as it can be found both in stores in your vicinity and in online stores too.

2. What Are The Precautions That Should Be Taken While Using This Oil?

If you are consuming the oil for digestion, and other illnesses then you must consult your doctor. You can have a problem with the Jamaican black castor oil if you are allergic or are on any kind of medication.

3. How Effective Is Jamaican Black Castor Oil On Skin

Since the oil is chemical free, you can be sure that it will not have any side effects. Moreover, the nutrients of the Jamaican black castor oil like vitamins, fatty acids, make the skin look better with regular use. It can cure problems like acne very easily and boost the confidence.

Using the Jamaican black castor oil on regular basis can be effective for alopecia too.

5. How To Use Jamaican Black Castor Oil On Natural Hair?

Using it on hair is not rocket science and has to be used just like any other hair oil. If you want, you can use the circular motion as it will improve the blood circulation.

Read on –Use Castor Oil for Acne and See the Result Overnight!

19 Amazing Reasons To Have A Cup Of Chamomile Tea For Health!

Soup – Should You Take It As An Appetizer Or A Meal?

How to Do Hot Oil Treatment for Hair at Home?

I am an avid follower of DIY home remedies and advocate of natural lifestyle.

How to Lose Arm Fat : A Complete Guide to Flaunt Well-Toned Arms!

Broccoli Nutrition : Let Us Explain Why Broccoli is Your Superfood!