Home Remedies for Ringworm – How to Get Rid of Ringworm!

Some Quick Myths and Facts About Ringworm Infection

The actual cause of ringworm is a worm.

Ringworm is caused by a particular type of fungi, dermatophytes as it is called, which is caused due to skin infection.

Ringworm appears only on the skin.

The fact is ringworm can also appear on the nails of both fingers and toe.

Ringworm appears only in red rings pattern on the skin.

Ringworm can appear in red patches that are bumpy on the skin, however, it is not necessary they are round in shape.

Ringworm is an infection that affects the kids only.

Ringworm is a fungal infection that can infect an individual of any age.

Ringworm is not a contagious infection.

Ringworm can spread from one person to the other, particularly in areas like pools, locker rooms, or even through combs, hats, brushes, etc.

Having flakiness on the scalp is dandruff and not ringworm.

The flaky scalp can be ringworm as sometimes it doesn’t form ring shape but can turn the scalp scaly similar to that of dandruff. 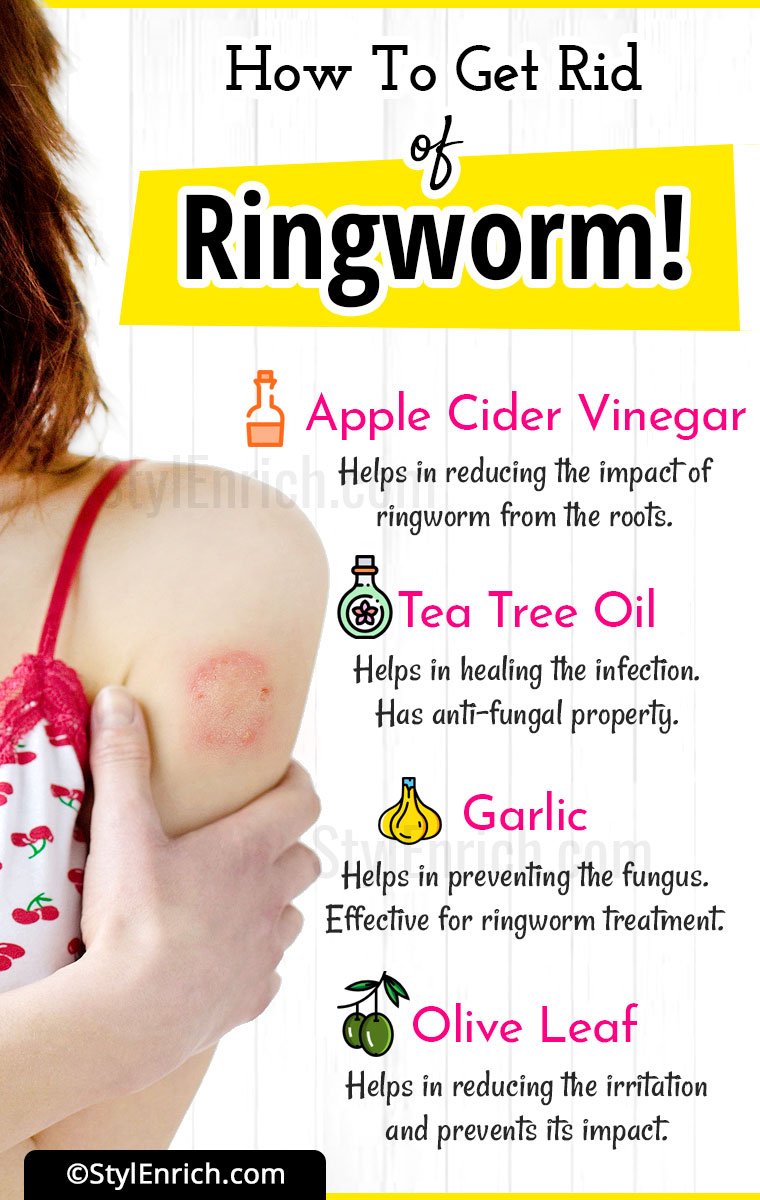 What is Ringworm? What are The Different Types of Ringworms?

Having ringworm? Thinking how to get rid of ringworm? People generally have a misconception that ringworm is a disease that is caused by particular types of worms. But the fact is that ringworm is merely a fungal infection which is quite commonly found.

Wondering what causes ringworm? Also known as dermatophytosis, ringworm is a type of infection that is caused due to a particular group of fungi on the skin, scalp or even in the nails. The affected area gets a red rash like patches, that are generally formed in a circular pattern. Sometimes, they are not also found in circular shapes too.

Thinking how do you get ringworm? The infection is basically caused when there is skin contact with the pet or individual that is already suffering from the infection.

Medically known as Tinea corporis, the infection generally is related to jock itch, athlete’s foot, scalp ringworm, etc. There are different types of ringworms that human beings experience. Some of the common ones are:

The infection is caused due to three different kinds of fungi namely epidermophyton, Microsporum, and Trichophyton that can easily spread when the infected animal or person comes in contact with another individual. The fungi are sometimes also observed in the garden soil which can lead to ringworm.

What are The Symptoms and Causes of Ringworm?

As we answered the question what is ringworm, it is known now that it is caused due to a fungal infection, known as dermatophytes. The fungi feed on the keratin levels that are produced by the body that is available on the nails, hair shafts, outer level of the skin.

But what causes ringworm? The ringworm fungi are widely present in the locker rooms, tanning beds, pools, showers, etc. They are also found on the products used by the infected person like hairbrushes, combs, towels, clothing, etc. Hence, the main cause of ringworm is when the infected person comes in contact with any individual by accident, or when the person comes in contact with the fungi itself.

The ringworm infection is not limited to the human beings only. The pet animals like the cats, horses, sheep, dogs, etc. are also responsible for carrying and passing the infection. Also, if the climate is warm, people are more likely to get infected by ringworm with ease. Are you a sportsperson? You are also likely to get the infection. Yes, if the individual is connected with sports like wrestling, mountain biking, etc. there are high chances of getting ringworm.

Thinking what does ringworm look like? The common symptoms of having ringworm are red patches that come with itching on the skin, scalp or nails. The infection is primarily observed in the form of red bumps which later gets converted into circle shaped patches that are clearly seen on the skin. When it comes to the scalp, there are small sores observed first, that later turn scaly making your scalp sore and tender on touching. The infected person may also observe loss of hair.

How to Get Rid of Ringworm Naturally?

Here are some of the commonly used remedies for curing ringworm. 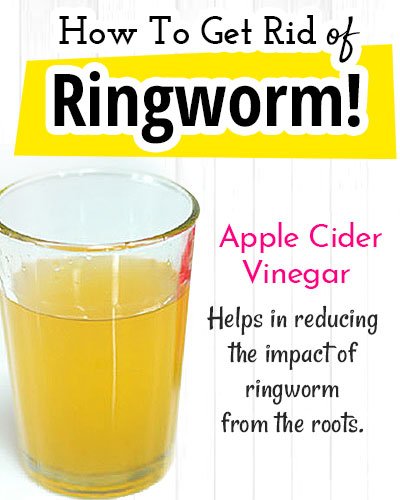 When it comes to how to get rid of ringworm, apple cider vinegar is the prime suggestion that many would provide you with. It comes with a good portion of anti-fungal properties that helps in reducing the impact of ringworm on the roots. It is applied directly on the ringworm on a regular basis which eliminates the fungi. It is also safe to use for children and parents as it is not toxic. 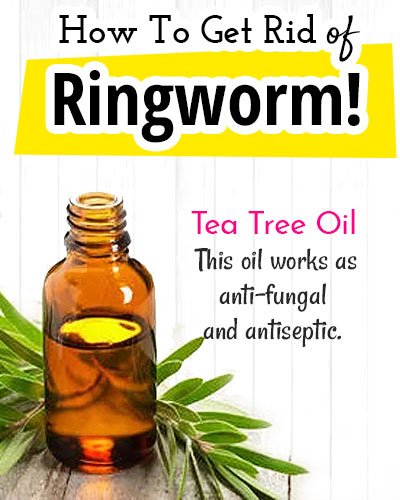 Tea tree oil for ringworm has been an ancient way of healing. The oil comes with excellent anti-fungal and antiseptic features that make it the best ringworm remedy. For using the tea tree oil, you simply need to apply the pure oil to the affected area around 3 to 4 times in a day using cotton balls. 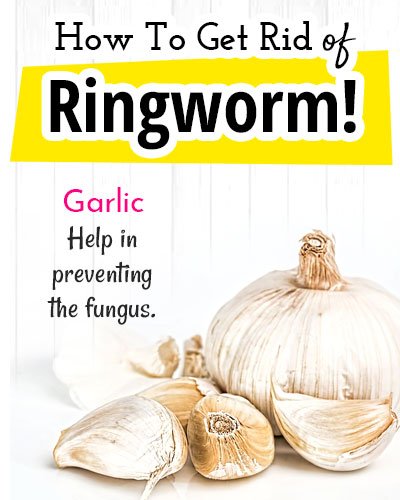 Garlic is a natural herb that comes with anti-fungal properties. It consists of a compound that is much more effective for ringworm treatment. For using this herb, you need to get the paste of garlic and apply it on the infected portion. Keep the garlic on the skin for few hours and rinse off using lukewarm water. Also, the individual having ringworm can eat around 2 cloves of garlic every day which would help in preventing the fungus. 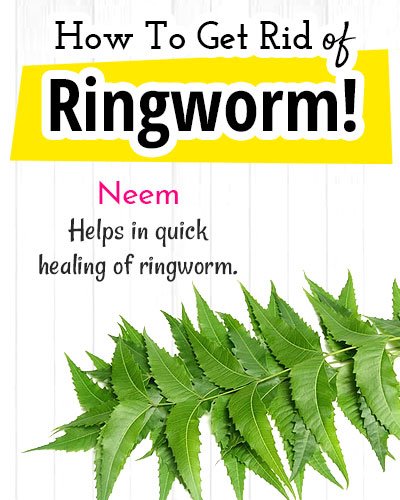 While thinking about how to get rid of ringworm, neem is also much beneficial for the process. Popular by the name Indian Lilac, it is used in the treatment of various skin problems. It comes with antifungal properties that help in quick healing of ringworm. For using this ingredient, you need to take few leaves of neem and crush them for making a paste. Add some sesame oil and turmeric powder to the paste and apply it on the ringworm. Leave it for an hour and rinse using lukewarm water. Repeating this process twice a day would provide with rapid improvement. 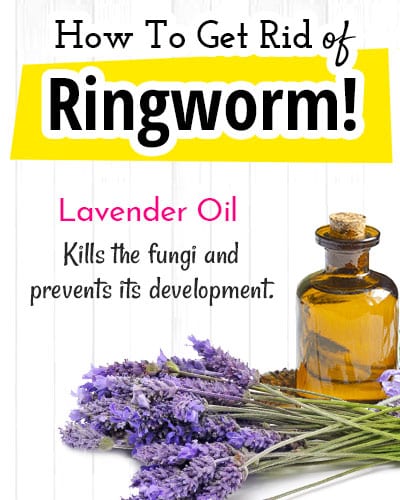 If you are concerned about sensitive skin, this is among the safest home remedies for ringworm. In case of babies, this combination is widely used for quick healing. Lavender oil comes with strong anti-fungal properties, and hence, some people use it alone for treating ringworm. It not only kills the fungi but also prevents its development. For using the oil combination, mix equal proportions of both the oils and apply it to the infection. Leave it for an hour and wash away. The process remains the same even if you are using only lavender oil. 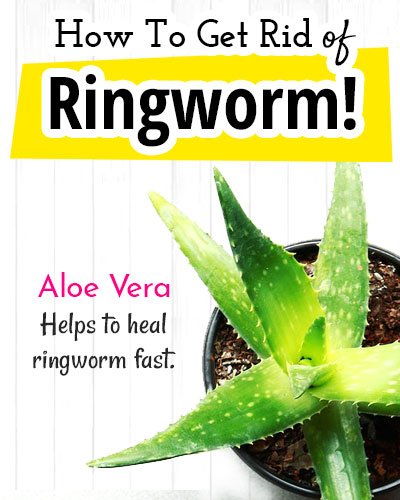 Aloe Vera is a multipurpose ingredient. Just as it helps with various skin and hair problems, it is also helpful while you are looking for tips on how to treat ringworm. For using Aloe Vera to treat ringworm, remove the gel from it and apply on the infected portion and leave it overnight. Wash away with lukewarm water. Aloe Vera is mostly used for ringworm on the scalp. For quick results, you can also use Aloe Vera on daily basis. 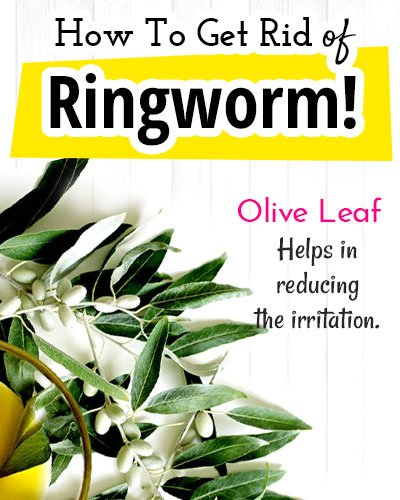 Olive leaf serves as the best ingredient that comes with a number of health benefits. Just as it is the best oil for body massage, similarly, it is the best oil used for ringworm body and scalp infection. It comes with anti-fungal features that help in reducing the irritation and the impact of ringworm on the body. For the treatment of ringworm, olive leaf is also consumed which not only reduces ringworm but also boosts your immunity to fight against it and other health issues. For quick results, consume the leaves for nearly 3 times in a day.

Apart from all these, other remedies while you are looking for how to get rid of ringworm includes Myrrh, Lemongrass tea, colloidal silver, vinegar and salt, turmeric, grapefruit, oregano oil, camphor, goldenseal tea, basil, mustard seeds, coconut oil, and many more. The ingredients not only help in eliminating ringworm from the skin but also helps in fighting against the fungal infections to avoid ringworm.

What are The Precautions One Needs To Take While Having Ringworm?

Henceforth, ringworm is an infection that can be cured very easily and effectively with natural ingredients. So, look for the symptoms well and protect yourself before it spreads wide.

Today, we present to you some interesting facts about sodium and the…

Headaches and migraines are always mentioned together and not separate. Both are…

Do cockroaches really worry you in your kitchen? Do they take a…

The sour, round and bright green limes belonging to the citrus fruits…

Obsessive-compulsive disorder is a mental health condition that involves distressing,…

Acidity can give you a hellish experience. You might experience stomach aches,…
Posting....