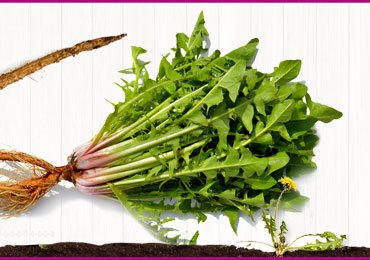 Today, we will discuss dandelion benefits. They are an excellent herbal medicine. It will give you relief from various health issues. 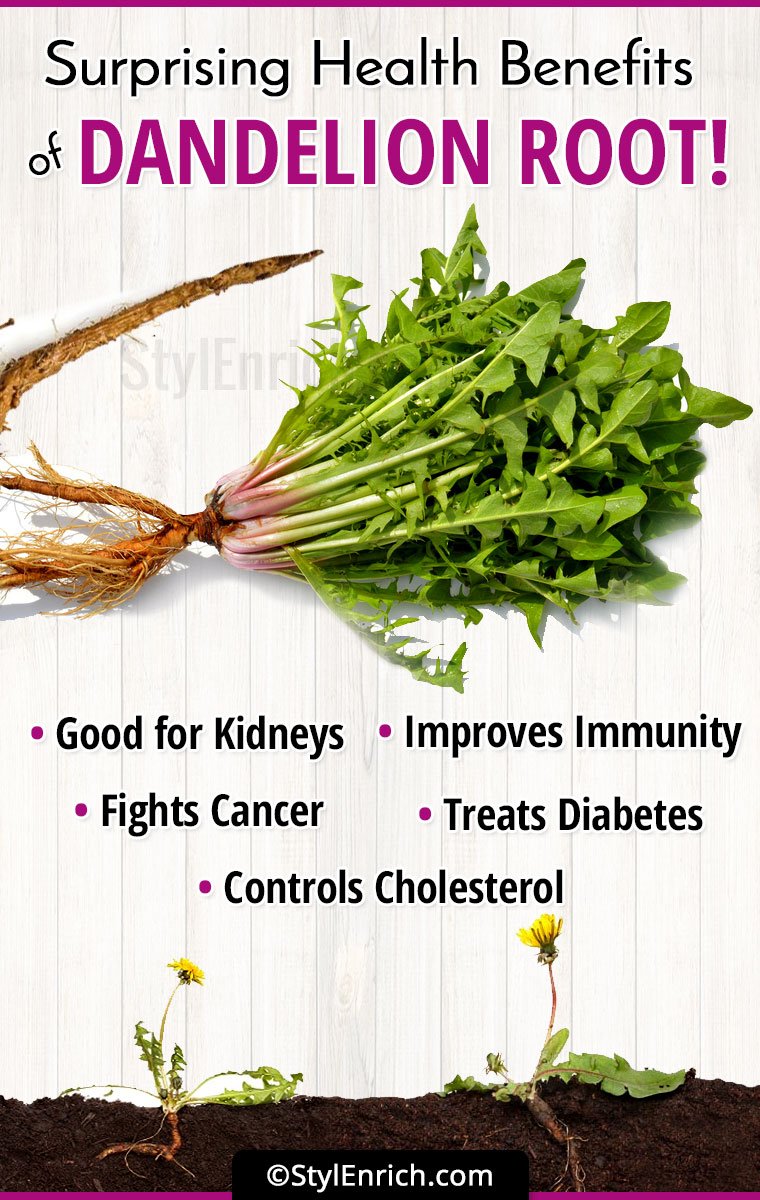 Don’t you wish for a magical plant that could cure all your illnesses and problems? Just take a puff of the plant and the illnesses would disappear. Well, there are a lot of natural and organic plants that give you loads of health benefits. And, one of them is the dandelion root. The dandelion benefits are plenty, and they give the body a much-needed detox and rejuvenation. Drink a cup of this tea and you can feel all your tensions and worries dissipating away.

Dandelion are those irksome weeds, which usually spread across the gardens and lawns. You can see them in the meadows, golf courses, soccer fields, and even on the pavement and sidewalks. When you see them, you would feel like cutting them off and throwing them away, little knowing about the medicinal powers in them. They are an excellent herbal medicine, which can be grown by anyone with very little efforts.

What Does Dandelion Contain?

Dandelion is loaded with beta-carotene that can be converted into Vitamin A. It is also rich in fiber, potassium, Vitamin B, Vitamin C, Calcium, Iron, Zinc, Magnesium, organic sodium, Phosphorous and some traces of Vitamin D, as well. It also has more protein than spinach leaves. This medicinal plant is quite useful for treating anemia, blood disorders, scurvy, skin problems and depression.

What Are The Dandelion Benefits?

The dandelion benefits are many, and some of them are listed below:

Dandelion is very good for digestion, as it acts as a mild laxative. It stimulates the appetite and tries to balance between the beneficial bacteria and the natural bacteria in the intestine, by increasing the release of the acid in the stomach.

Being diuretic in nature, the dandelion roots are used for the kidneys in clearing out the excess water, waste and salt. It also increases the production of urine, by inhibiting the growth of microbes in the urinary system. It also helps in replacing the potassium that gets lost by the kidneys in urination.

3. Improves The Functioning Of Liver

Consuming dandelion can ensure an improvement in the functioning of the liver. It removes the toxins and re-establishes the balance between electrolyte and hydration. It also tries to enhance the bile release. By helping the liver, it also treats the hormonal acne problems.

One of the main dandelion benefits is that each and every part of the plant has powerful antioxidants in them. These can help in preventing the free radical damages to the DNA and cells. The plant has Vitamin A and C, which increases the production of the super-oxide dismutase in liver.

As per studies, it has been proved that dandelion can actually slow down the growth of cancerous cells, and prevents them from spreading. The leaves of the plant contain phytonutrients and antioxidants which fight with cancer.

One of the effective dandelion benefits is that it helps in regulating the blood sugar and the levels of insulin the body. This is because it has the ability to control the lipid levels.

People suffering from gallbladder problems can also find effective relief with dandelion. By increasing the production of bile, it reduces the inflammations so that the blockages and problems in gallbladder gets resolved.

10. Helps In Treating Swelling And Pains

It contains all those antioxidants and essential fatty acids, which can be useful in reducing overall inflammation from the body. This helps in providing relief from swelling and pain.

Immunity is the best health benefit that can be had with dandelion. It fights with the fungi and microbes and boosts the immunity in the system. When the immunity is strong, a person cannot contract diseases, and remains immune.

How To Cook With Dandelion?

All parts of dandelion plant, including flowers, roots and leaves are edible. The leaves are tender, so they can be used in making raw salads. The leaves and roots can also be cooked. One can also make dandelion tea or coffee with them. For making coffee, one will need to roast the dandelion roots.

The leaves and roots of dandelion plant are dried and crushed for making dandelion tea. The tea contains Vitamin A, Vitamin C, Vitamin D, Zinc, Iron, Potassium and Magnesium.

Dandelion tea can assist in easing out the symptoms of various ailments, such as diabetes, bloating, liver dysfunction, etc. The dandelion plant consists of two parts, which can be used for making tea – the leaves and the roots. While the root of the plant is considered good for the liver problems, the leaves are helpful in treating the kidney related problems.

The dandelion root extract blocks the invasion of the non-invasive breast cancerous cells. So, it is useful in preventing the growth or the metastasis of the breast cancer cells.

Sometimes, people feel bloated due to the weight of water itself. Dandelion root tea is quite effective for treating bloating. Due to the diuretic properties that it has, the tea has a considerable impact on the water content. People, who drink this tea will see an increase in the urinating frequency. So, this will automatically reduce the bloating and the water weight.

One of the main dandelion benefits is that it is quite useful for detoxifying the liver. By increasing the detoxifying enzymes, it proves to be quite effective for the liver functioning. It promotes the health of the liver and is also known as a liver tonic. It is because it increases the bile flow. The tea can also cure skin problems and eye problems, and give relief from symptoms of diseases related to liver.

Dandelion is also quite effective in bringing down the blood sugar level. And, due to that, people find it good for treating their diabetic problems.

Coffee is a very addictive beverage, but it has lots of caffeine in it, which tend to be harmful for the body, if consumed in larger measures. So, you can substitute the dandelion tea for coffee by roasting the roots of the plant till it becomes a dark brown colour. When you steep it in the hot water and strain it out, you will get a drink which is quite similar to coffee, but without having any side effects or bad chemicals.

The dandelion tea is quite similar to a weight loss drug. It has similar kind of effect on the body. It inhibits the pancreatic lipase, which is an enzyme that is released during the digestion process. It is useful in breaking down the fat. So, the tea is quite effective in its anti-obesity mission.

As per the studies conducted on the plant related to its potential for fighting with cancer, the results have been quite promising. The extract of dandelion root induces the death of cells in melanoma. It does this without impacting the non-cancerous cells. It also kills off all the cells related to pancreatic cancer.

When you pair the dandelion leaves and the roots with another natural herb called urva ursi, you will get a fantastic blend, which will help in preventing urinary tract infections. This is due to the fact that this unique mixture has anti-bacterial compounds, which helps in increasing the urination. And, this helps in keeping the tract clean and free from infections.

What Should Be The Dosage Of Dandelion Tea?

Before you embark on the journey of dandelion tea, ensure that you consult with your doctor. It is very easy to grow dandelion in your backyard. You will only need to grow them, chop the roots from them and steep them in water to make a regular cup of tea. But, a person should have sufficient training in herbs, to know how much dosage would be good for your body. Anything beyond normal is always counter-productive, and might prove to be harmful.

Where To Find And Harvest Dandelion?

If you have dandelions growing in your backyard or garden, then you can use the home grown roots and leaves. But, make sure that the plants are not treated with any kind of chemicals, pesticides or fertilizers, before you go about harvesting them. Also, try to harvest them while they are still young and tender. Do not collect them from the wild, as you wouldn’t know what all the plant has been treated with. Also, the ones growing in the lawn might not be the best. Try to pick them up from the mountain meadow or from abandoned lots. You can also buy seeds and grow them in your backyard. The seeds will grow readily and will bloom very quickly.

If you don’t have access to the plant, then, you could buy dandelion leaves from health food markets, where you could also get the dried and frozen herb. Or, you could buy readymade packets of dandelion tea, tinctures or capsules from a store.

How To Make Dandelion Tea?

The tea is an infusion that is made with the leaves of the plant. One can also make it by roasting the dandelion roots. Both of them are considered to be safe, and can be used for various purposes.

Before preparing the tea, wash the leaves thoroughly, as it might have other chemicals or pesticides. After washing them, let them steep in the hot water for about 15 to 20 minutes. And, if you are using the root of the plant, then, wash the roots thoroughly, and chop them into finer pieces. Heat the roots on a high in the oven for around 2 hours. Now, steep 1 to 2 teaspoons of the root mixture into hot water and let it steep for around 10 minutes.

Side Effects Of Dandelion

Dandelion is a safe plant but some people might have allergies. People, who are allergic to marigold, chrysanthemum daisy, chamomile etc. should avoid dandelion. Also, pregnant and nursing ladies should check with their doctors before consuming dandelion. Dandelion is also linked with irritable conditions of stomach or bowel. So, if a person feels obstruction in the bile duct, the plant should be avoided. Some of the medications related to diabetes and thinning of blood, and antacids are usually broken down in liver, and these may interact with the dandelion tea. People, who are allergic to dandelion, might face mouth sores.

The dandelion benefits are quite impressive. Drinking cups of dandelion tea will help you in reducing the water weight. And, this will give you relief from bloating. Just drink 2 cups of this tea and see yourself visiting the washroom more frequently. Urinating more is a good sign and it actually implies that your body is getting detoxified. So, go ahead and give your body the much needed dandelion detox.