Remember that nutty stuff on crunchy baked ingredients in the bakery? Yes, I am talking about those tiny poppy seeds, which are also known as khus khus. The seeds are added to the bakery items and other meals to add some crunch and color. The seeds come with a mutilated shape and contain a crumbly texture with a flavor similar to the nuts. Mostly used in bakery items, they are also used to decorate some dishes.

Although the flower from which the seeds are derived, is said to have some narcotic properties, the seeds are free from any kind of addictive drugs. The immature seeds may contain some portion of alkaloids in the form of morphine, which is an addictive painkiller, the ripe seeds don’t contain any kind of such substance in it. 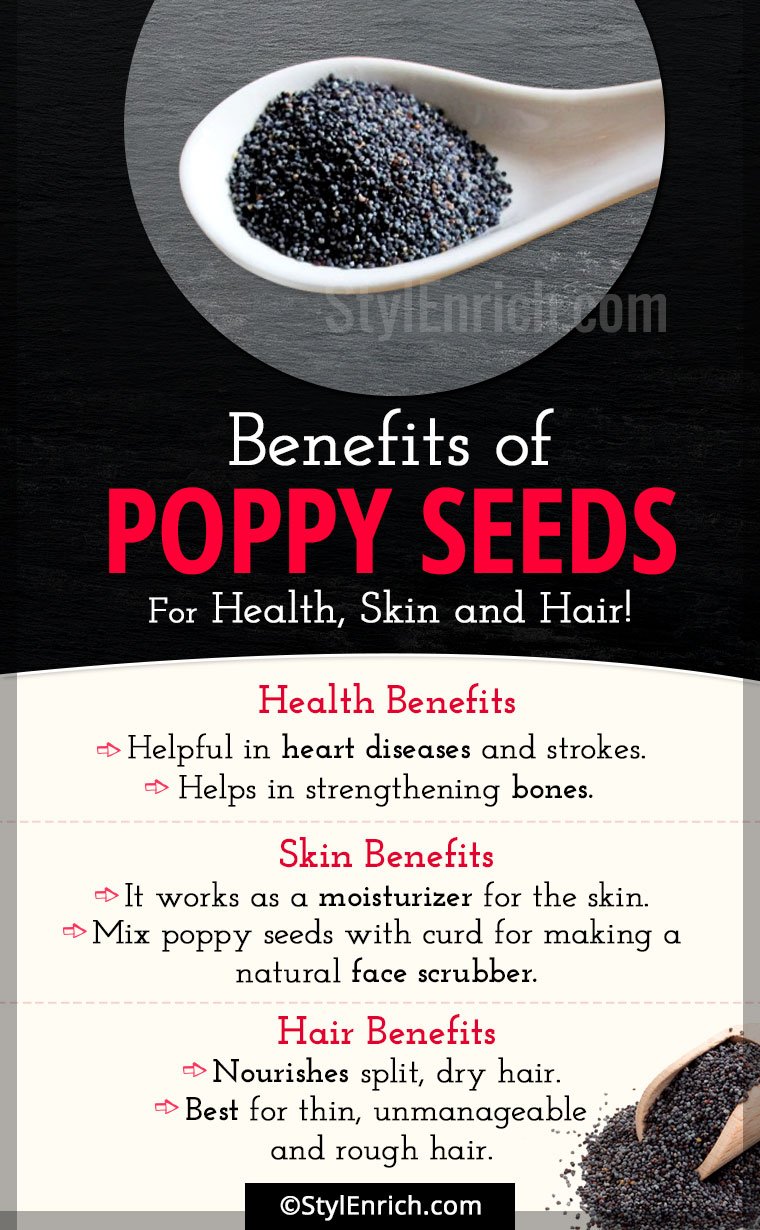 Have you ever thought that the miniature seeds would also be full of nutrients! Yes, that’s true. The poppy seeds are rich in folate, niacin, minerals, calcium, etc. Let’s have a broad view of the nutrient list it serves you with.

Poppy seeds contain a good amount of calcium and phosphorus required on a daily basis. They both are necessary for the growth and strength of the bones. The bones cannot be replaced with new ones, and hence, it is important for the elders to maintain them. Poppy seeds help them in not only maintaining but also preventing them from osteoporosis. Phosphorus, on the other hand, helps in the producing energy and forms the DNA cells.

Iron not only transmits oxygen to every part of your body but also stores some portion in your muscles. This stored oxygen is utilized when your body performs extra activities. The iron obtained from poppy seeds is also important for the proper functioning of your immune system. The iron helps in the production of neurotransmitters and proteins which improves your immunity.

Zinc is a nutrient which the body cannot store, and hence, you need to intake ingredients which are rich in zinc. Zinc is a supporting element for the formation of proteins. It also helps the new cells to produce and develop in a healthy manner. It also encourages the normal and neurological development of the body. It also boosts the cells, which fight against the bad bacteria in your immune system, by helping in its production.

The outer portion of the poppy seeds provides you with dietary fiber in a good portion. The fiber helps in absorbing the water, slowing the metabolism in the digestive region. It gives you relief from constipation problems and keeps you completely hydrated throughout the day. It also reduces the cholesterol level in the LDL blood with the help of bile salts and reducing the distraction of the colon.

Poppy seeds are also rich in Vitamin B-Complex. The list also includes thiamin, niacin, pyridoxine, pantothenic acid, folic acid and riboflavin. It helps in the process of metabolism, especially for carbohydrates and fat. A water-soluble ingredient of Vitamin B, Thiamin helps in producing energy from carbohydrates, which helps the nervous system, muscles and heart in functioning. The pyridoxine in the seeds helps in the process of conversion of food to glucose, generating energy. It also controls the blood levels, which reduces the risk of heart disorders. Pantothenic acid helps in using the carbohydrates, lipids and proteins which improve the health of your skin. Folic acid is obtained for producing red blood cells, which is helpful during pregnancy for the development of baby’s brain and spinal cord.

Vitamin E obtained from poppy seeds is very beneficial for disorders like heart disorders, neurological disorders, cancer, etc. which also includes dementia. The ingredient is also beneficial for the health of the skin. It also reduces the chances of beriberi, depression, anemia, etc.

The poppy seeds are filled with several ingredients, and hence, it has various skin, health and hair benefits. Here are few benefits which may shock you that a small ingredient, carries all these profits.

The poppy seeds are adequate enough for various small and big health disorders. The plant has several chemical compounds in it that is capable to prevent from various diseases. As it is also rich in various acids such as oleic acids, which are helpful in heart diseases and strokes. It also includes alkaloids which are equally healthy too. When included in various dishes, it gives remedies to the following health problems:

Just as poppy seeds are good for health and skin, they are also beneficial for the hair. Be it any internal problem or external, poppy seeds have always given amazing results for shining and smooth hair. The air pollution and malnutrition has led to several hair problems which can in a natural way be cured using poppy seeds. Some of them are:

Use of Poppy Seeds in Medicines

Points To Be Kept In Mind While Using Poppy Seeds

Poppy seeds are generally one of the safe ingredients to use. There are very rare people who might have met with any kind of allergies after having poppy seeds. They are also safe for the infants and the pregnant women. However, the people related to sports should keep in mind that the seeds contain morphine, codeine, etc. substances which are opiate and hence, it may result to fake positive results.

Poppy seeds are listed as one of the natural ingredients which include several beneficial elements in it. The multi-advantageous ingredient can be used in making several mouth-watering recipes like Flourless Blueberry lemon poppy seeds muffins, poppy seeds fig pancakes, spelt crackers, scones, baked eggs with lemon cream and poppy seeds, etc. It is also widely used in baked items, cereals, salad dressings, etc. to increase the taste of the meals. Have a taste of this marvelous kidney-shaped seeds, which would surely end with an unforgettable taste you might have ever had.