Salt – Is It A Healthy or Harmful To Health?

Have you ever thought of having meals without salt? Yes, your expression is true. Salt is the prime ingredient, without which, your meals would be tasteless. No matter whether you are having a raw, boiled or cooked food, all require an adequate amount of salt in for making it eatable. But have you ever thought “is salt healthy or unhealthy”?

Salt – Some Basics About It

The scientific name of salt is Sodium Chloride. Salt consists of 40% sodium and 60% of chloride in it. Other varieties of salts include some amount of iron, potassium, zinc and calcium in it, while iodine is added externally to make the salt more balanced for regular use. In ancient times, salt was used as a preservative to store the food items for a long time. It was also used to avoid the growth of bacteria that decayed the food items.

Salt is not only used to increase the flavor of the food. The minerals obtained from salt are quite vital for the body as they help in fluid balancing, functioning of muscles and transmission of the nerves. Salt is available in many different varieties like plain table salt, Himalayan pink salt, sea salt, etc., however, the origin of all is either through evaporation of the sea water, salt mines or by water rich in minerals. All of them carry different texture, color and tastes, but are equally healthy. 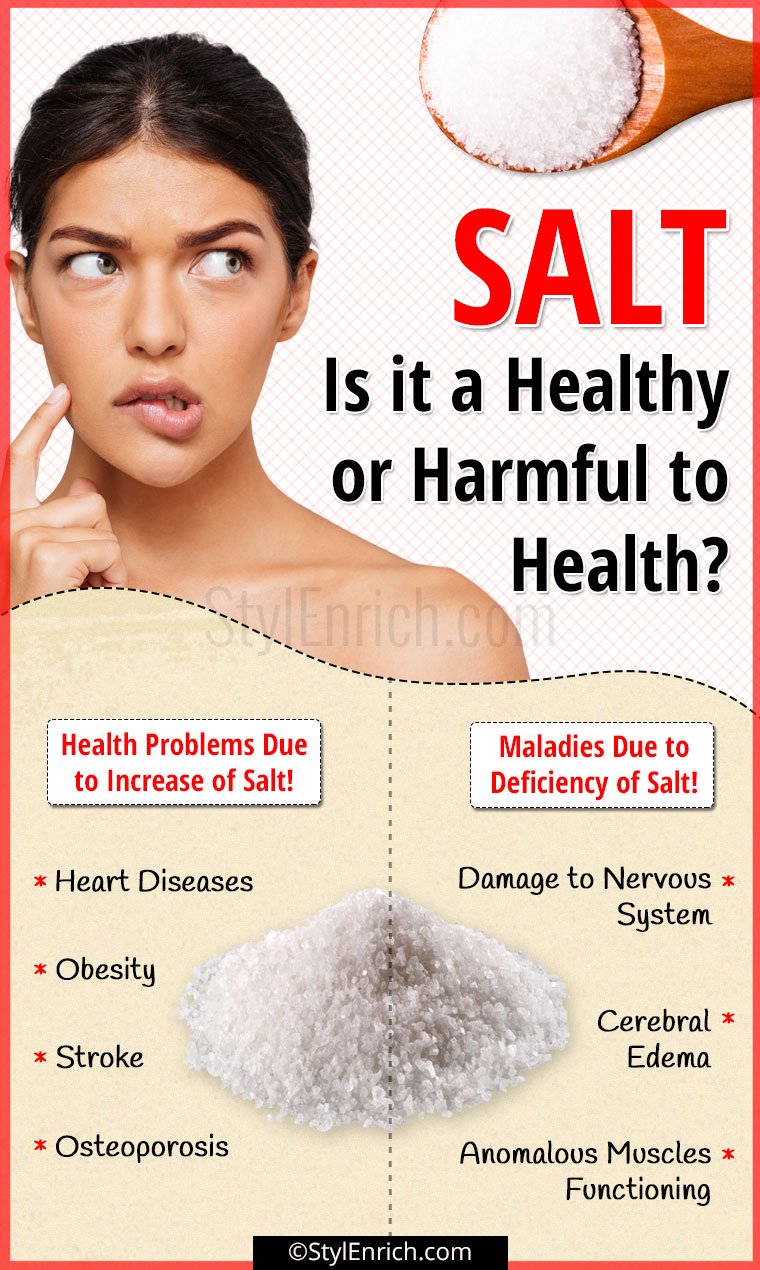 Salt And Its Effects On The Human Body

This tiny amount of salt is important for our health, however, the excess intake and the shortage of the same may lead to some serious health problems too. Generally, adults need approximately 1 gram of salt per day, which can be extended to a maximum limit of 6 grams for a healthy and balanced body. Increase or decrease of salt intake is surely going to harm your body.

Is Salt Healthy Or Unhealthy?

Salt is important for several functions in our body. Hence should be taken in appropriate quantity. When the intake decreases, or increases than required, you might have to face situations like:

When the circulation of blood to your heart reduces, or gets blocked, you might face situations like heart disease or heart failure. The increase in the intake of salt would raise your blood pressure, which increases the risk of coronary heart diseases to a great extent. The walls of the blood vessels get thick, which blocks the flow of blood to your heart resulting into heart attack. On the other hand, your heart muscle can also get thicken, which reduces the heart pumps and the circulation of blood in your overall body. To avoid such situations, it is highly recommended to reduce the intake of salt, which would also decrease your weight, reducing the chances of heart diseases.

Salt is the prime reason of the increase in the blood pressure. Due to the increase, the supply of blood to your brain decreases. Another side effect of the increased blood pressure is seen in the supply of oxygen to your brain, due to which, the cells die. As a result, the individual may face situations like ischemic stroke or hemorrhagic stroke, which if severe can result in death. To avoid strokes from banging you down, one should reduce the quantity of salt in their meals and also carry some exercises on a daily basis.

Just as overweight, zero exercises, etc. are the reasons for an increase in the blood pressure, the heavy intake of salt is the prime reason among all. Having excess salt in your diet, would result in an increase in the pressure your blood places over your blood vessels. This would affect the pumping of blood in your body, leading to situations like strokes or attacks. Generally, all the heart-related problems have blood pressure as the basic reason, which happens due to the excess intake of salt in your body. It is, hence, recommended to decrease your quantity of salt as you grow older for a healthy life and controlled blood pressure.

Surprised! However, it is true that high intake of salt would increase the chances to have stomach cancer in your body. When more than required salt is taken into the diet, it damages the stomach lining, and makes it easily susceptible leading to increase in the growth of bacteria in your stomach. As the bacteria in the stomach increase the inflammation, the risk of getting stomach cancer or ulcers also increases. This disorder is widely seen among men when compared to women.

This ailment is related to the bones. The individual facing this problem suffers from brittle and thin bones which are predisposed to breaking. The human body stores calcium in the bones. Having a diet high in salt would affect the stored calcium and remove it from the body through urine. Hence, your bones get weak and you might face fractures frequently. Along with it, if your blood pressure also increases, this damage can take you to a higher level of risk. The elder people and the women who have faced menopause are at high risk of getting into this troublesome disease quickly.

High blood pressure, Coronary heart disease, diabetes, sleep apnea, etc. are the basic reasons for having obesity. However, salt doesn’t increase your weight directly. By consuming more salt, you feel more thirsty, due to which you have more fluids. The fluids if are taken through sugary drinks, they would increase your weight. Obesity is widely spread among the teens, and now also among the children, as they consume soft drinks often. Hence, an increase in the intake of salt also leads to obesity problems.

When calcium increases in your body, especially kidney, it increases the chances to have kidney stones. Calcium increases due to increase in the blood sugar level and salt intake in the kidney which results in kidney stones. These painful stones in some cases also turn to severe kidney diseases. The main function of the kidney is to control the fluid balance and the blood pressure, which is lost in the urine. All these symptoms can lead to increase in the chances of having kidney diseases.

Dementia is a syndrome where the functions of the brain are affected. The individual having dementia might face problems with their memory, judgment, thinking, language, behavior, etc. This happens when a blood vessel is blocked in the brain, resulting in strokes, mini strokes, etc. This phase is known as vascular dementia. Having salt in an increased portion, increases your blood pressure also, which leads to strokes and then dementia. So, make sure you live a healthy lifestyle with a decrease in salt quantity with a healthy diet to avoid dementia.

Apart from this, reduction in salt can also protect you from syndromes like asthma, diabetes, water retention, nausea, tinnitus, etc. giving you a healthy routine. Also, the increase of salt in your body would lead to increase in the growth of a bacteria named Helicobacter pylori, resulting in problems like inflammation or gastric ulcers, which may lead to stomach cancer. Having a diet with increased salt also damages the stomach lining, exposing it to carcinogens.

Maladies Due to Deficiency of Salt

Just as the increase of salt is harmful for your health, the deficiency of the same is also harmful. The deficiency leads to a syndrome named hyponatremia, which may give you harmful side-effects too. Here are some basic maladies faced due to deficiency of salt.

The disorders due to deficiency may not directly show up. In the initial stage, symptoms like stomach upset, digestion problems, nausea, vomiting, abnormal fatigue, frequent headache, etc. If the symptoms are not considered on early basis, it may lead to some sober side effects. So, next time you feel any of the above symptoms frequently, make sure you visit your doctor quickly.

The nervous system needs salt in appropriate quantity so that it can function properly. Hyponatremia is also a condition that damages your nervous system. Salt, also known as sodium, plays a vital role in transforming the potentials of the nerve cells. This minor signal permits the communication among the cells. The deficiency of salt would fail the communication, resulting to neurological muddles. Along with this, other effects like stupefaction, seizures, brain damage, coma, etc. can also be visualized.

This is one of the serious side effect of salt deficiency. This is a problem mainly affects your brain by swelling it inside your skull. The increase in the swelling results to upsurge strain on the tissues of your brain, which may lead to bleeding in the brain as a severe side effect. The final result of this disorder is brain damage on long term. If you find yourself lacking sodium, consult a doctor as soon as possible to avoid this dangerous problem risking your life.

Hence, hyponatremia is a stern condition one must not neglect. Also, if you are performing a strong workout daily, similar to the athletics, you may lack sodium in your body. In case you face any of the symptoms, it is advisable to contact your physician and protect yourself from hyponatremia and other harmful effects.

Thus we have seen here “is salt healthy or unhealthy”. Henceforth, neither the excess use of salt in regular meals is healthy nor the shortage is healthy. One must know how to balance the actual amount of salt required which would allow your body to function well and also would provide you the desired taste for a healthy living.

Natural Home Remedies for Wrinkled Hands that You Can Try Out!

I have a keen interest in natural & herbal remedies. I prefer to use organic ingredients in day to day life wherever possible. Researching and sharing my knowledge about organic lifestyle is what I enjoy the most. I stay in Mumbai, India with my family.

Benefits Of Watercress On Skin, Hair And Health!

Health Benefits Of Pineapple – 12 Powerful Reasons To Eat It!