Foot Reflexology Massage Benefits and How to do It?

We bring here the best Sciatica Exercises that will give you immediate relief!

Thus it is a natural non-invasive method of reducing pain and stress in the body caused due to some illness or disease. 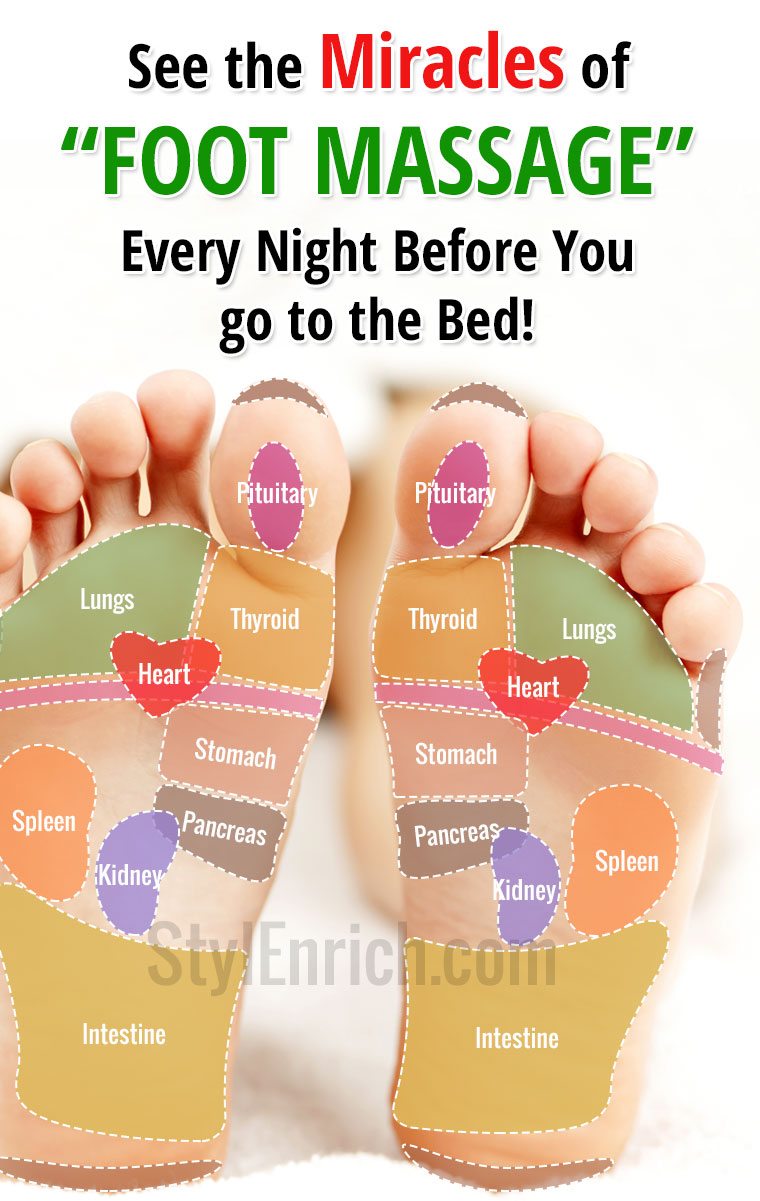 Reflexology is dated back to 2330 BC when a pictograph related to this was found in the Egyptian tomb of Arkhamor. The knowledge regarding Reflexology was passed down orally. Evidence of the same was also found in China and India. The book on internal medicine by the Chinese Yellow Emperor has references to foot examination and treatment. Marco Polo translated some of the Chinese work to Italian in the year 1300 introducing it to Europe.

Mr. William Fritzgerald MD of the United States wrote about the vertical zones of the body and the pain relieving stimulus points on the feet, hands and the outer ear. He was known as the “Father of Reflexology”.

Dr. Shilbey Riley did more research on Mr. Fritzgerald’s work and came out with a foot map depicting the different reflex points and areas. He also divided the body into horizontal zones and related those points to them. Eunice Ingham worked with Dr. Riley and brought out a detailed foot reflexology chart which is used even today. She found that the feet were more sensitive to Reflexology processes. Her nephew Dwight Byers worked on the Foot Reflexology chart further to give it a polished form at the International Reflexology Institute.

The benefits of Reflexology address holistic health as well as addressing of individual organ systems. Some of the benefits are listed below.

Rebuild nervous system – As we age our nerves get less sensitive especially the ones at the body extremities. You could enhance the sensitivity by doing reflexology.  During reflexology, nearly around 7000 nerve endings can be stimulated in a single session. This helps in increased sensitivity of the nerves and proper functioning of the nervous system. Any blocks in the neural system can also be removed.

By removing imbalances in the various organ systems with reflexology the general energy levels in the body will be raised. The metabolism in the body also improves bringing back the bounce.

This is one of the most important applications of reflexology.  It is commonly used to relieve pain due to headaches and migraines.  The tension in the underlying muscles is released by reflexology which causes the pain to disappear. Stress could also be one of the causes of a headache which can be tackled by this process.

Healing is one of the powerful reflexology benefits.  By improving circulation of blood in the body, cells can regenerate faster and hence the healing process is faster. Reflexology can be done along with conventional treatment method since it has no side effects.

Pregnant women can undertake reflexology to gather a number of benefits. Labour pain becomes manageable and painkillers may not be necessary post childbirth. Since the healing of the body is enhanced the women can come back to their normal health as fast as possible.

Since reflexology removes the energy blocks in the neural paths it brings in the peace of mind and reduces stress in the body. It helps to keep the body and mind calm and hence is a good form of relaxation.

The foot reflexology chart gives the specific points or areas on and under the feet and their linkage to the specific organ system.

The basic foot reflexology chart shows a reflection of the various regions of the body on the sole of the foot. Refer to figure 1 for the same.

Figure 1: Basic Reflexology chart for the sole of the foot 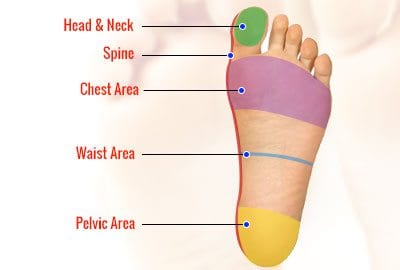 As seen in the figure1 the toes represent the neck and head region. Thus when you are doing reflexology on the toes, the head and neck region will get affected.  The chest is represented by the dark area below the toes. The area along the inside of both the feet is correlated to the spine. Just below the chest region, the part of the foot which is the narrowest is related to the waist. Thus stomach should be in a region above the waistline while the intestine should be below it. Since the stomach is on the left side of the body you will find it on the left foot. Thus organs found on the right side of the body are represented by the right foot while the organs found on the left side of the body are found in the left foot.

Once we understand the demarcation of the body regions on the foot we can get detailed information on the foot sole reflexology chart. Refer to figure 2 for the same. 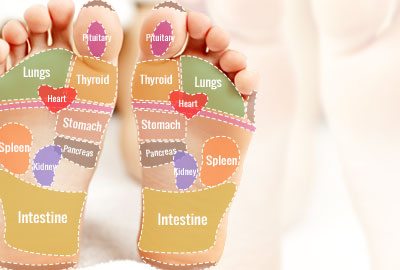 As you can see from the diagram eyes are represented by the 2nd and 3rd toes. Thus if you have some problems with the eyes applying pressure with your thumb on that corresponding area for a few seconds and a number of times will bring down the symptoms you have been experiencing. Similarly, if you have any issues with your ears you can massage the 4th and 5th toes to get relief.

3. Foot Reflexology on the Outside of the Foot

This chart can be used to reduce pain in any of the organ systems represented in the chart. Refer to figure 3 for the chart.

Figure 3: Reflexology chart for the outside of the foot 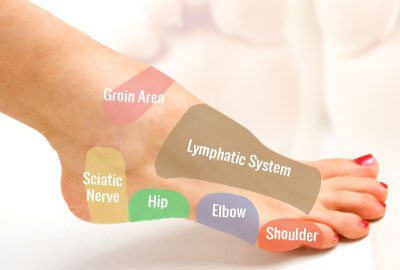 As seen from the diagram the lymphatic system, chest, elbow, hip, shoulder, knee, groin area and sciatic nerves is represented on the outside of the foot. Thus if your right shoulder is paining you could try reflexology on the shoulder area on your right foot for a few minutes. This action should bring down the pain.

4. Foot Reflexology on the Inside of the Foot

The foot reflexology chart for the inside shows the following regions of the body – Chest, Bladder, Spine, Groin, Sciatic nerve and the Lymphatic system. Refer to figure 4 for the same. Thus if you have any chest ailment you could massage the area representing the chest to get relief.

Thus the above charts are references for beginners to try out foot reflexology practices.

Figure 4: Reflexology chart for the inside of the foot 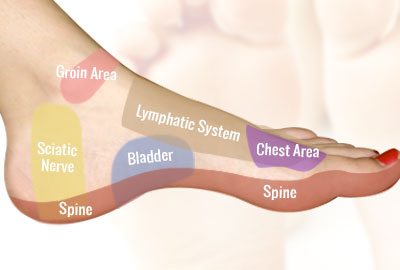 The meridian points for stomach, gall bladder, liver, bladder, and spleen exists on the tip of the toes. Refer to figure 5. Except for the middle toe, all toes represent some meridian point. By applying pressure to these points in both clockwise and anticlockwise directions the particular organ function is stimulated.

Figure 5: Reflexology chart for meridian points on the foot

There are some techniques you should be aware of for doing foot reflexology. They are listed below.

Thumb or Finger walking – This is the most commonly used technique. Here the last part of the thumb/ index finger just below the last joint is flexed up and down on the reflex area. A crawling movement is enacted with the thumb/finger without leaving contact with the skin. By flexing and straightening the thumb you literally take single steps called bites and walk on the skin of the foot. Thus the action involves applying pressure for some time and later resting. This is repeated many times to remove blocks in the reflex area. The fingernails should be trimmed to do this procedure. Hands should be washed and kept clean too.

Make circular movements at a reflex point with thumb or index finger while applying pressure. This action is done 3 times. Then move around a small circle with just enough pressure on the skin tissue with thumb/finger. Don’t rub hard. This helps in removal of any calcified deposits on the nerve endings and triggers self-healing.

Thumb press/ pressure – The action of pressing the specific areas with the thumb is called Thumb press. The pressing should not be too hard. It raises the warmth in the area thereby improving the functioning of the specific organ system. There is increased energy flow too.

This procedure is done with the thumbs only. Thumb walk to the specific reflex area. Hold the point with the flat surface of the thumb with the thumb at a 90-degree angle to the surface of the skin. Apply gentle pressure and pull the thumb back. Repeat this action many ties. This method is suitable for reflexes situated deep within the skin. It is ideal for pituitary, pineal, colon and appendix regions of the body.

In this method, you have to place the flat portion of the thumb on the required reflex point and apply pressure gently. Meanwhile use the other hand to rotate the foot. This procedure is found to be suitable for the diaphragm, solar plexus area, and adrenal glands.

The foot massage involves using any of the above techniques repeatedly for a few minutes. Reflexology can be done by one’s self or somebody else can do it for you. In any case, before starting the session you need to do the following.

Wash both the feet with warm water and dry them. The person doing the reflexology should wash their hands and keep it hygienically clean.

If you are doing reflexology yourself sit down on the floor on a mat in a comfortable position. You could also sit on the bed with pillows cropped behind your back comfortably. Place the foot you on which you need to do work on the knee of the other foot. This will enable you to get easy access to your foot. You can also sit in a cross-legged posture.

Before starting the massage you can apply some massage oil on the feet and the hands. This will loosen the feet. Hold the spine area of the feet with your palms such that fingers are at the top and thumbs are at the bottom. Twist the spine area all along with the hands and loosen it. This is a relaxation exercise.

A complete foot massage would consist of the following steps which would take an hour to complete. You could massage the complete foot or concentrate only on the specific area which depends on what benefit you intend to get.

In the next 24 hours keep drinking lots of water to eliminate the toxins.

Massaging the foot for 10 minutes helps in improving blood circulation in the body. More oxygen is carried to all the cells in the body promoting overall health. The lymphatic system gets stimulated and problems due to varicose veins are also reduced.

10 minutes of reflexology before going to bed helps calm the mind and body. This is very true after a hectic day of standing and walking.

One of the biggest benefits of foot massage is in relieving of pains and headaches.

Finally to have an overall healthy body and mind reflexology is a good procedure.

Conditions for Which Reflexology is not Advised

Reflexology is the alternative method to relieve pain in the body. It does not cure any illness or ailments. It is more of a preventive measure to help keep the body in good shape. It is easy to follow and can be done by anybody at home or with aid at Spas.